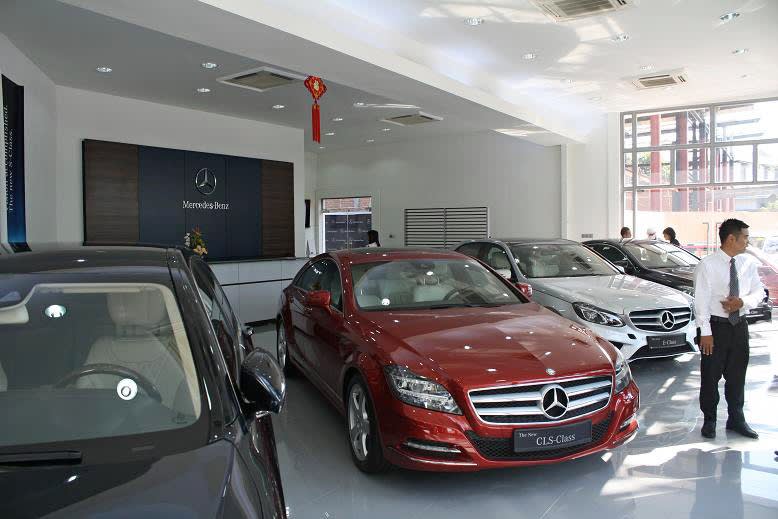 YANGON -- Myanmar's auto market is taking off as foreign car manufacturers make inroads with the recent introduction of import opportunities for new cars.

Germany's Daimler, China's Dongfeng Motor Group and other automakers have set up sales footholds in Myanmar since last autumn when the country's government started to allow both companies and individuals to import new cars. Myanmar's auto market is currently dominated by used cars. However, the country's growing middle class means that many drivers are expected to switch to new vehicles in the future.

General Motors opened a showroom in Yangon at the end of February for its "Chevrolet" brand cars. It is the first sales foothold to be established in Myanmar by the U.S. automaker since the Southeast Asian country embarked on democratic reforms in 2011. The 300-square-meter GM showroom sells the Chevrolet Cruze compact car and the Chevrolet Colorado pickup truck, among other vehicles.

Other foreign automakers, including Japan's Mazda Motor and the U.K.'s Jaguar Land Rover, will also make a full-scale foray into the potentially lucrative market soon. Mazda also started operations at a temporary store in Myanmar earlier this year. The automaker's models such as the CX-5 SUV proved popular, with over 30 vehicles sold in just three days through an exhibition and sale held at a local shopping center.

Myanmar had imposed tight import restrictions on new autos for many years as part of policies to prevent the outflow of foreign currency. Only a limited number of individuals such as military personnel were allowed to import new cars. Local auto dealers sold used cars, mostly imported from Japan. Foreign automakers were only allowed to provide maintenance and other after-sale services in the country.

"More than 95% of passenger cars running in Myanmar are used," said one local auto dealer.

The situation changed dramatically last October, when Myanmar's government significantly eased restrictions on auto imports. Local companies are now allowed to import new cars, with the maximum inventory capped at 100 vehicles at a time. The policy turnaround has prompted many foreign carmakers to break into Myanmar's new auto market in partnership with local distributors.

In Southeast Asian auto markets, Japanese makers have taken the lead. They entered the new market earlier than rivals from other countries and attracted many customers thanks to their high-quality cars. Japanese automakers now have a combined share of 80 to 90% there.

Now Chinese automakers are poised to throw down the gauntlet against their Japanese rivals and launch aggressive sales campaigns, including in rural Myanmar.

"We have a lot of room to grab a slice of Myanmar's new auto market as it is still nascent," said a Dongfeng Motor Group official.

Myanmar's per-capita gross domestic product is the lowest among Southeast Asian nations. However, the middle class is emerging in Myanmar's urban areas as President Thein Sein's administration moves ahead with economic liberalization policy.

Demand for autos is robust in Myanmar. As of the end of 2013, there were about 400,000 passenger cars registered, a jump of 30% from a year earlier. Myanmar's auto market is still very small in size, compared with neighboring markets such as Thailand and Indonesia, but it has great potential for future growth.