Local processors say they cannot compete with rivals across the border 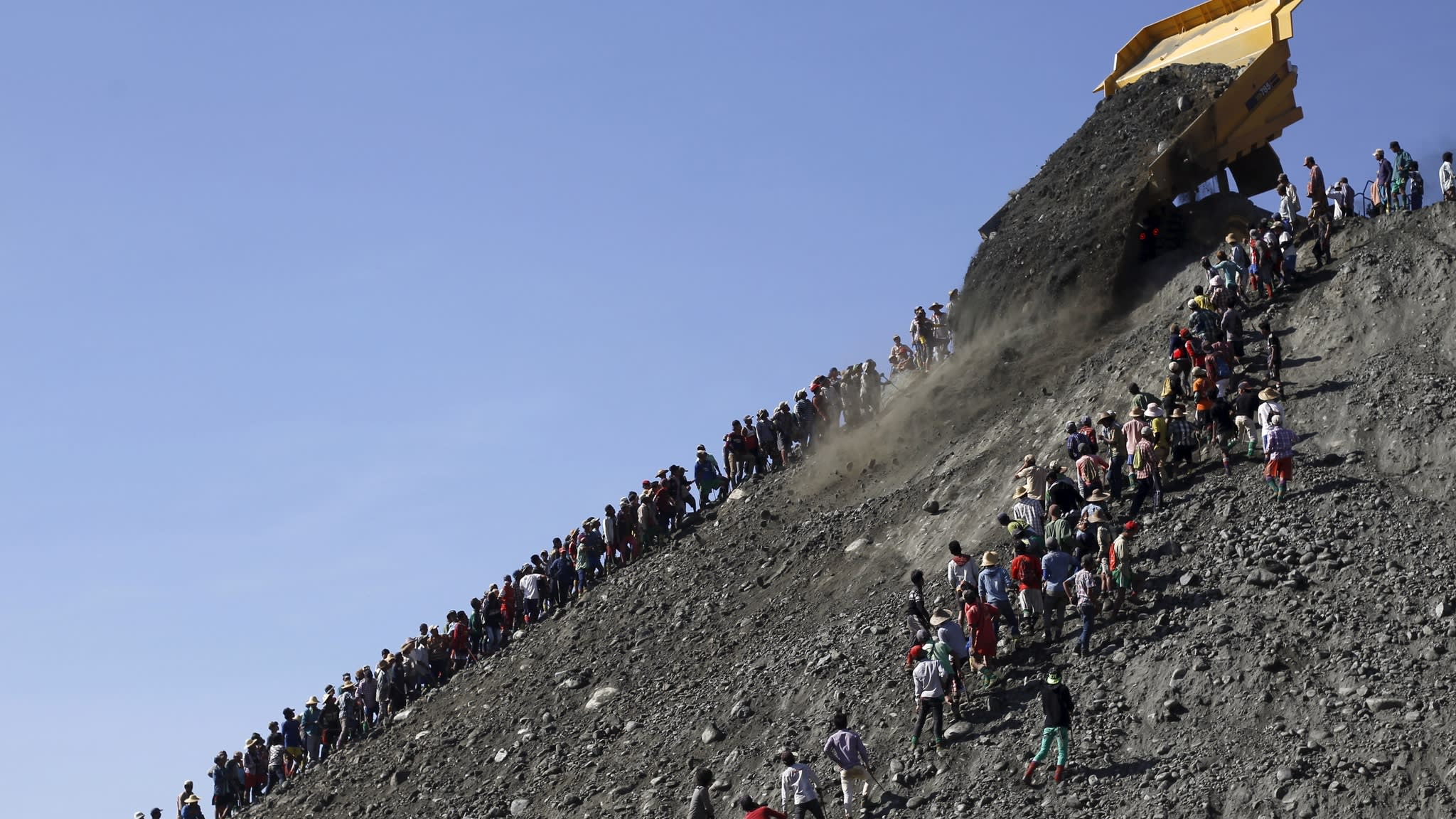 Miners search for jade stones at a Hpakant mine in northern Myanmar's Kachin state, the site of recent deadly landslides.   © Reuters

NAYPYITAW -- The jade mining industry in Myanmar, one of the world's richest sources of the gem, is scrambling to meet rising Chinese demand, sometimes at the cost of human lives.

Yet this booming trade has not translated into growth beyond the dangerous work of extraction. In fact, Myanmar's jade processing industry has languished, mainly owing to a lack of capital.

As mines in Myanmar's northernmost state of Kachin expand production to satisfy Chinese buyers, they face accusations of failing to invest in safety improvements amid a string of deadly accidents.

On July 14, at least 15 people were killed and about 40 others injured in a landslide at the Mahar Gem block in Hpakant Township, the country's most famous jade producing area. A wall of rock collapsed as people were digging for jade stones after a monsoon storm struck the area. 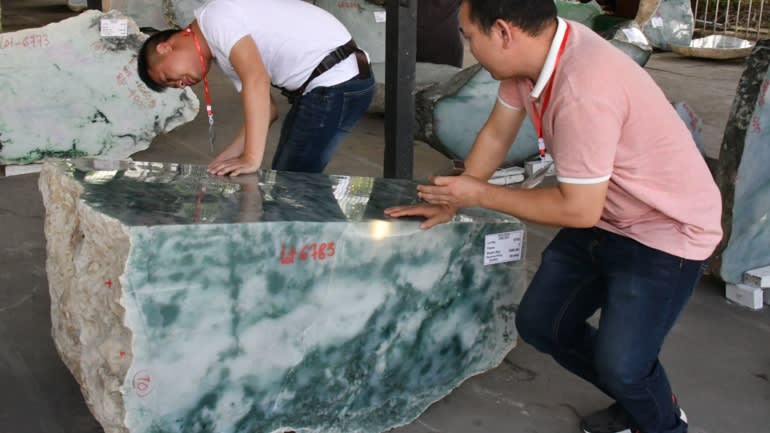 Chinese merchant check the quality of jade stone during the Gems Emporium in Naypyitaw on June 20. (Photo by Yuichi Nitta)

This latest accident hit Hpakant just a few weeks after a landslide in May, when at least 17 local laborers and residents were killed.

Myanmar and Guatemala are the world's principal sources of gem stone. Around 80% of Myanmar's jade comes from Kachin state, according to a government official. Many people scavenge for jade in homes of making income.

Details about such mine accidents are scarce. But Swedwatch, a Sweden-based nongovernmental organization, published a report in June titled "Overlooked and Undermined" that said, "thousands of people have lost land and livelihoods, and up to hundreds died in every year in landslides and flooding caused by negligent jade mining practices." The report warned that "thousands of foreign heavy machines are used in the highly problematic mining project".

Machines are supplied by global manufacturers such as U.S.-based Caterpillar, Japan's Komatsu and Volvo Construction Equipment, a unit of Sweden's Volvo Group. After Swedwatch called on suppliers to help monitor end-users, Komatsu responded that it generally relies on its distributors to confirm how its equipment is used and that options for recalling machinery are limited.

Jade is regarded as "the stone of heaven" by the Chinese, according to British auction house Christie's.

Chinese buyers piled into this year's session of the Gems Emporium, the 10-day event held here in June, making it even more crowded that last year's event. Of around 4,300 registered merchants, 70% were from China --and this covers only legal trade in the stone.

But the expansion of main market for Myanmar jade has not helped build up the local crafting industry, with a lack of capital holding back the sector's growth and modernization.

"Domestic jade processing has been decreasing for the last five years", said woman who owns a local gem processing and retail business.

Jade ore must be cut and polished before it is sold as jewelry or accessories. When the woman visited processing factories in southern China's Yunnan Province, she learned how far behind Myanmar is in terms of the quality of processing.

"We do not have the design skills they have," she told Nikkei. "We cannot afford the machines they use."

The woman plans to close one of her factories, owing to the difficulty of competing with Chinese technology. "Most of the raw jade ore that is sold to China comes back to Myanmar as a final product with a price 10 times higher," she said. A man polishes a piece of jade at a market in Myanmar. Buyers and craftsmen in China's neighboring Yunnan Province play an major role in the jade trade.   © Reuters

A government official acknowledged the challenge. "It is true that we do not have sufficient skills," said Min Thu, general manager of the Gem Enterprise, which is under the Ministry of Natural Resources and Environmental Conservation.

To improve the local industry, the ministry started a training project last year with support from the government of China's Yunnan Province,Min Thu said. The programs sends around 50 skilled labors to China to learn the latest finishing methods. But local manufacturers in Myanmar doubt the government's seriousness toward building up the industry. One of them said, "the government prefers exporting raw materials because it will bring tax in revenue. The government does not care about us."

Decadeslong ethnic conflicts in Myanmar, fueled in part by the jade trade, have discouraged the local processing industry from modernizing. By some estimates, more than half of the stone extracted in Myanmar is smuggled to China in order to finance weapons purchases.

The conflict between Myanmar government forces and Kachin militants is regarded as one of the world's longest-running wars. Swedwatch said that "the control over revenues from Kachin's jade mines is a strategic priority for both sides in the ongoing armed conflict that has marred Kachin for six decades."