YANGON -- Myanmar is three years into a telecoms boom that has changed the physical and technological landscape of the country with unparalleled speed. Since the sector was opened to foreign competition in 2014, thousands of mobile towers have sprung up around the country and more than 30,000km of fiber cable has been connected. Mobile penetration has jumped from 10% to well over 70%, while internet speeds have soared and data usage has increased 1,500 times over.

The first phase was infrastructure. The second phase now taking off is a race to create online content and services to provide consumers with everything from Korean TV dramas and Myanmar pop music to medical support and education.

"You're going to see all these doctors and nurses consulting on live video," said Wai Lin Tun, the chief executive of local internet provider Frontiir, at an industry conference in Naypyitaw called "Myanmar Connect" held mid-September. "This is not 10 or 20 years away, you're going to see it happen in the next two to five years," he added. The country's leading tech and innovation hub, Phandeeyar, is about to welcome the next round of startups to its accelerator program. The new cohort includes an app for students to find tutors online and another allowing hospitals and clinics to access digital medical records, said Phandeeyar Chief Executive Jes Kaliebe Petersen.

Much of the industry's focus, however, is on entertainment rather than education. Malaysian video-on-demand provider iflix joined competitor Netflix in the Myanmar market in March. French cable TV channel Canal+ announced earlier this year that it had partnered with local media company Forever Group to enter Myanmar. Meanwhile, local players like Pyone Play and Mahar have launched online streaming services devoted to local content. This is prompting a wave of partnerships between companies providing internet services -- including the three operational telco providers Ooredoo Myanmar, Telenor Myanmar and state-owned MPT -- and companies offering content. Iflix announced a partnership with Ooredoo in June.

London-listed Myanmar social media company MySQUAR announced on Oct. 19 it had signed a memorandum of understanding with other local companies to provide free wi-fi on the national rail network. Users paying for streaming content is expected to form part of the revenue stream, MySQUAR said.

Running in tandem with the search for content is an attempt to change the way people in Myanmar use the internet. Because telco reform came so late to the country, its internet experience was essentially born on mobile devices. Three years later, internet use in Myanmar still consists mainly of smartphone owners -- 80% of all mobile users -- on just two services, Facebook and YouTube.

A 2016 survey from think tank LIRNEasia found that less than 1% of the population had internet access through a source other than a mobile phone. What internet service providers are hoping for is a boom in home broadband.

"Broadband is going to explode," Frontiir's Tun told conference delegates. "Fixed broadband is coming and it will reach homes at an affordable price."

Providers are split between those like Frontiir offering a wireless service and those running fiber below or above ground. But despite a host of new ISPs springing up, home broadband is still only available in select areas of the big cities and remains unaffordable for most of the inhabitants.

Affordability seems to be on the way, however, prices have already fallen by 50% to 75% in the last year, Nexlab's Min said. Industry executives are expecting another 50% drop over the next year or so.

One factor behind this fall is the entry of the telcos into the home broadband market to compete directly with existing ISPs. This is a natural move given the saturated state of Myanmar's mobile market. The three operational telcos have a collective 52 million SIM card subscriptions in a population of 53 million, and competition over data prices prompted the regulator to set a price floor this year of 1.25 kyat per megabyte (less than one U.S. cent). 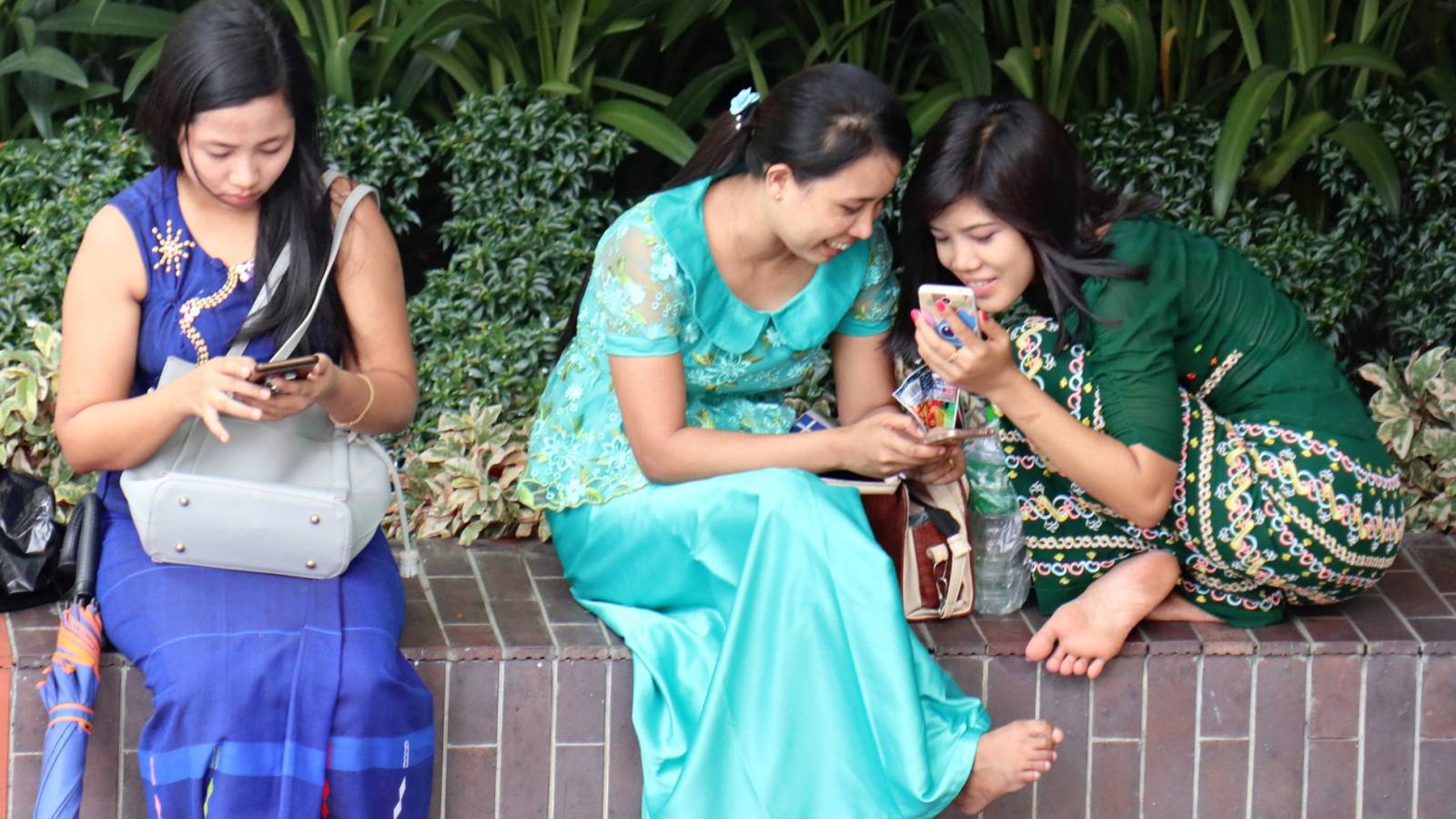 Average revenue per user has dropped and a fourth operator -- Mytel, a tie-up between Vietnam's Viettel and various Myanmar entities -- will enter the market in 2018. By comparison, broadband is a greenfield.

Telenor is in the middle of a pilot project to provide fiber-to-the-home broadband in select townships in Yangon that will help it to decide "whether to go massive on this," Telenor Myanmar Chief Executive Lars Erik Tellman told Myanmar Connect delegates. Telenor's website boasts that its prices are "five to 10 times lower" than some of its competitors'.

MPT entered the broadband market in August with its own home fiber package with prices in line with Telenor's. The firm will expand across Yangon and Mandalay early next year and plans to roll out the service to other major cities throughout 2018, Benino said. He expects a "drastic improvement" in broadband access over the next 12 months.

Lagging behind its two competitors is Ooredoo, which announced on Oct. 21 it is partnering with local ISP Yatanarpon Teleport to offer fiber broadband in and around Mandalay starting from November. The Qatari company said it would expand its services to other cities in the country in due course.

MPT's August announcement has already triggered a wave of price reductions from private competitors playing catch-up, with many either halving prices or doubling speeds. More competition is on the horizon. Myanmar's regulator has auctioned off a chunk of spectrum to four dedicated local broadband providers split across three geographic areas.

Global Technology has spectrum for an area that includes the capital Naypyitaw and expects to launch its service in April 2018. Amara Communications has Yangon and Mandalay and intends to launch before the end of 2017. Their entry "will keep everyone in the fixed broadband business on our toes," said Frontiir's Tun.

Not everyone is betting on a broadband explosion. Internet speeds on mobile devices have almost doubled this year thanks to a telco-only allocation of fourth generation spectrum. Portable, cheap and fast, the smartphone hotspot remains the preferred option for CEOs and students alike. "There's not much you can do now on broadband you can't do on mobile," said Petersen. "I don't see the case right now for ordinary consumers in Myanmar installing broadband in the home unless you have demands that are very out of the ordinary."

Either way speeds and services on both options are only going to improve. Overland and deep-sea cables are putting more and more potential bandwidth at Myanmar's disposal. Myo Ohn is chief executive of Singapore company Campana, which provides regional connectivity services. He said Myanmar's total internet traffic was estimated at 324 gigabits per second and that demand still outstripped supply, which was supporting wholesale prices for broadband connectivity.

That 324 gigabits is double what it was last year and Ohn expects it to continue to double yearly -- hitting 1 terabit per second around 2020 or 2021 -- as new connections become available. Campana, for example, aims to go live with cross-border services on an overland cable to Thailand in November and is planning its own deep-sea Myanmar-Singapore cable.

That undersea connection, said Ohn, would "meet Myanmar's bandwidth demand for the next 15 to 20 years." The deep-sea cable will have a total capacity of 20 terabits per second -- over 60 times the country's current needs -- and should be operational in late 2018.

Until this year Campana would have been unable to offer these connections, because only the three operational telcos held international gateway (IGW) licenses. This meant any ISP had to go through them for an international connection. But just as the government broke MPT's monopoly in 2014, it broke the telco oligopoly on cross-border connections this year by issuing 11 local companies -- including Campana's Myanmar subsidiary -- with IGW licenses. Wholesale broadband prices are going to fall, and retail with them.

For Campana, the next step after its cable is in place will be to create Myanmar's first internet exchange, said Myo. This would be a single facility at which all content and data companies operating in Myanmar could connect with each other and, through Campana's deep-sea cable, to the huge internet exchange in Singapore, he said.