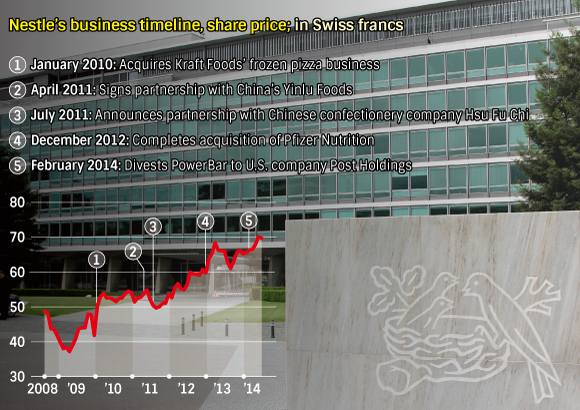 GENEVA -- "Privilege" is the word Paul Bulcke, chief executive officer of food giant Nestle, uses to emphasize his company's position in the growing Asian market. This privilege was built over 100 years with commitments in India, Japan and the Philippines, and more recently with a strategy of acquisitions and partnership building. In a recent interview with the Nikkei, Bulcke discussed the importance of long-term priorities for Asia's markets as well as standing up for the protection of intellectual property.

Nestle's consolidated sales grew 2.7% on the year to 92.1 billion Swiss francs ($102 billion) in the financial year ended December 2013. Its trading operating profit margin for the year was 15.2%. These high earnings were supported by growing sales in emerging countries, mainly in Asia and Latin America. Sales in emerging countries, where it generates 44% of the total, grew 9% last financial year on an existing business basis, excluding the influence of currency fluctuations. Although growth was down from the 11% of the preceding year, Bulcke is optimistic.

"Emerging markets are still emerging, continuing pure development, though the very strong momentum we saw a few years ago has cooled a bit. Now you see China cools a little bit, and India, I think, has cooled to a certain extent and shown very slow growth for a few years, but should be growing," he said. "But for us, it has been growing. It grew last year, and in the first quarter, it grew slower than before, but still handsomely."

Nestle has big hopes for Asia because of the region's growing population and the expanding middle class. Asia's dietary culture is in harmony with Nestle's business model for marketing, according to Bulcke, in the context of Nestle's long-time cultivation of Asian markets.

The company now values management that emphasizes long-term success. For example, the company introduced Nescafe, a high selling brand of instant coffee, in 1938 and has since continually improved the product for over 70 years.

Nestle intends to continue its focus on the Asian market to take advantage of growth there. "Asia is very important for us. You just think of the number of people living in Asia," said Bulcke. "We always say it is China, it is India, but then you think of Indonesia, you think of Vietnam. I feel Asia has inner strength of growth and development that is contagious.

"We have the privilege of being a company that has been there (in Asia) for so many years," added the CEO.

However, Nestle is not entirely dependent on emerging economies. It has also achieved growth in Europe, where consumption is sluggish due to the debt crisis. The company's stock price, which fell below 40 Swiss francs temporarily during the global economic crisis is currently at around 70 Swiss francs.

Bulcke emphasized the company's consistent investment in developing new products, cooperating with other companies and acquiring corporations. "We never stopped growing in developed markets," he said. "For example, in Europe, we have been investing and we have been growing even through the whole crisis. Our growth has been basically linked with quite a lot of innovation and new ways of doing business."

"For Nestle, there is no better example of that than Japan," Bulcke said. In addition to basic brands, such as Nescafe and KitKat, Nestle sells high-value products successfully in Japan, including Nespresso. The company's federal management style seems to have shown its strength in the local market. This management method is best suited to the company that began in Switzerland, a small European country with around 8 million people, as it was destined to seek growth outside its own borders.

"We are growing (in Japan)," said Bulcke, "because of real internal initiatives, and ideas, that are quite pioneering also for Nestle.

One example is the Nescafe Ambassador system, which was introduced to tap the demand for coffee in offices, an area of weakness for Nestle Japan. Consumers who join the program receive coffee machines free of charge and place them in the workplace. The "Ambassadors" collect money from colleagues who drink coffee made with the machine and the company delivers Nestle coffee powder. The system is working, with 120,000 machines distributed on loan.

"Our people in Japan are doing many things in many different, very creative ways and we have very interesting growth in Japan. Growth is conditioned by the market environment, but so much in your hands," said Bulcke.

"We are decentralized, so we give them power," said Bulcke. "You cannot organize Japan from here, in Lake Geneva. You have to be there. You have to live the culture from day to day."

Nestle operates in more than 100 countries, and has subsidiaries and factories around the world. So, what is the key to making good management decisions and progressing as a huge global company? Bulcke said the management method will not work without a sharp focus and a clear strategy on product development and investment. "We look at each of our business categories in a market, and then we see how well they fit with our strategic direction which is basically nutrition, health and a wellness agenda. These are what Nestle stands for," he explained.

Nestle has built a diverse product portfolio to meet global demand through continuous acquisitions and partnerships. It has established its position as a global food conglomerate, marketing more than 2,000 brands around the world, including Nescafe, Perrier bottled water, Buitoni pasta and Haagen-Dazs ice cream.

Over the past several years, Nestle has invested billions of dollars in acquisitions, purchasing U.S. drugmaker Pfizer's infant nutrition business and L'Oreal's skincare operation, appearing to shift towards pharmaceuticals. However, Bulcke asserts that the company strategy and focus have not wavered since 1867 when its founder Henri Nestle, a pharmacist, developed a formula for babies who could not be breast fed.

For portfolio management, it is essential to expand business activities based on a careful strategy and to continually review existing businesses.  Nestle declared in the autumn of 2013 that it would sell unprofitable businesses. The company was positive about selling and purchasing businesses, but became more bearish. "We analyzed quite a lot of cells, which are categories in a market, then you aggregate them. We analyzed 2,000 cells, and certain cells are not really delivering," according to Bulcke.

On reflection, Nestle became aware that it had emphasized long-term management to the point where it had become careless about profitability. Bulcke explained, "We believe in the long term, but sometimes the long term is very, very long and is a little bit of a risky place. And that is why you saw some divestment.

"We have trimmed down in the past years. We have cut out about one-third of SKU (stock keeping units), or even more. Is it finished? It's still an ongoing process," Bulcke said. Appropriate portfolio management is bringing the company back.

Reconsideration aimed at raising efficiency extend to the organization and staff, because federal management is accompanied by risks stemming from the larger and more complex parent company. "We are a company with much complexity. We have many brands. We favor decentralization but sometimes we use it as an alibi for having a lot of staff," said Bulcke. "There's a lot of potential for efficiency, and we are going to do that.

At present, competition is further intensifying across the food industry as companies from emerging countries in Asia and other regions join the market. In this situation, more and more top executives are confronted with the question of whether to prefer market share by cutting prices or profits by maintaining prices.

"We are not in a price business. We are in a value business," said Bulcke.

He acknowledged that price negotiations with major retailers sometimes become tense, but if the company can present added value, even retailers can avoid being dragged into price-cutting competitions, which require more financial strength. "They are strong, the retailers, but our brands are also strong. They know how to value that, so you find some middle ground. And sometimes there is tension, because we are where they cannot be, and vice versa. That's business," he said.

Nestle is easily exposed to criticism by society because it is a large business that tries to serve a wide range of consumers. Widespread obesity is one example. "The food and beverage industry has brought so much to society. It has allowed urbanization. It has been part of the development  to keep food and nutrients for longer, combining food so you have (a balance of) nutrients, and so on," said Bulcke. But he thinks the company needs to do something about social problems related to the food industry. "Now we are somewhere in a situation where society criticizes the food industry because of some phenomena that are very serious, like obesity," he said.

Meanwhile, it has become important for management to focus on the issues that could damage consumer confidence in Nestle and its brand power. These are the basis for the company's corporate value, its relations with communities around the world. Bulcke also emphasizes the need for long-term efforts to protect intellectual property rights in cooperation with governments, particularly in emerging countries. "They are doing their part. We would like to have all ships tight. There are so many initiatives and wrong initiatives in the area. They have products that are produced illegally, but then, the best way is to stand up for your rights, and express that to the authorities, together with the authorities, helping to shape and frame," he said.

Nestle has grown into one of the world's largest companies, and has raised its stock price over time, but this has not been without its trials. "Yes indeed, in Europe, we have some deflationary pressures, which is not good," said the CEO. "You know that once you're in a spiral, it is very hard to get out. I think authorities are aware of that danger," he said.

Asia will surely become even more important for Nestle's growth. In the autumn of 2012, the company held an explanatory meeting for Chinese investors. "Investors are the consumers. They know the company, they see what we do, so we are open to whoever wants to be part of our journey.  Investing, welcome," said Bulcke. Of course, Nestle is not focusing solely on Asian investors, but he is clearly aware that a deeper understanding of the company in Asia will help it take advantage of the expanding middle class and sustain growth.