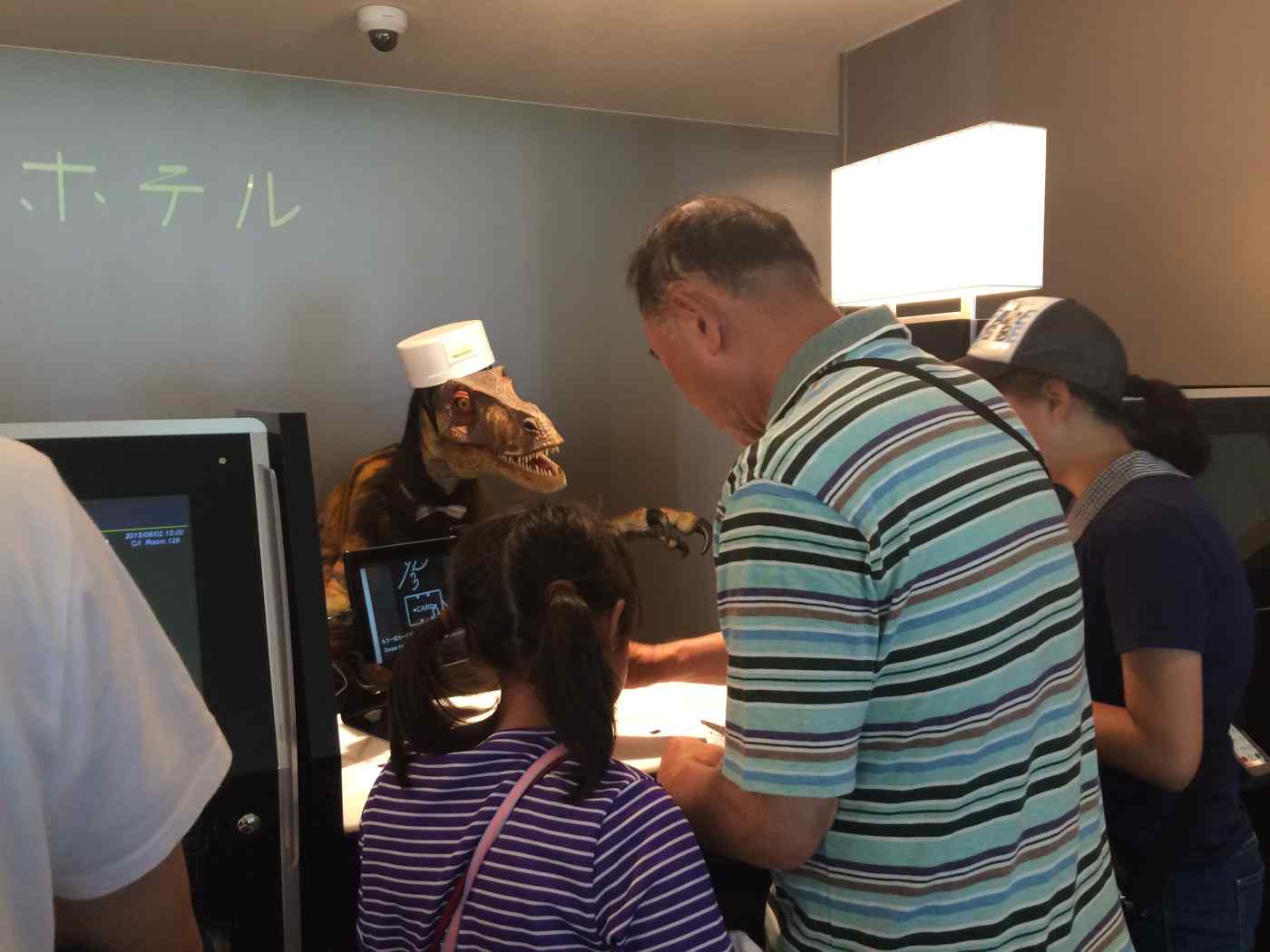 NAGASAKI, Japan -- If the goal of a hotel is to offer a memorable stay, the new Henn-na Hotel on Japan's southwestern island of Kyushu makes the grade. There, a concierge will sit next to you all night. If you can't sleep, she'll be happy to chat about the weather. She'll adjust the lights to your liking. But don't be surprised when she starts crying like an impatient little girl if you don't promptly respond to her wake-up call. "You were supposed to be up a minute ago," she'll whine. "Wake up, wake up, wake up!"

Chu-ri-chan, the concierge, is a robot developed by Sharp, the Japanese electronics maker. Her name is based on how Japanese say "tulip," since she is shaped like one. She is hard and cold on the outside, but her voice is friendly. At times, communicating with her can be a challenge. "I wasn't sure if she would understand my northern dialect, so I tried speaking to her in the local Kyushu dialect," said Rie Takano, a guest. "I told her to turn off the lights. She turned herself off instead." 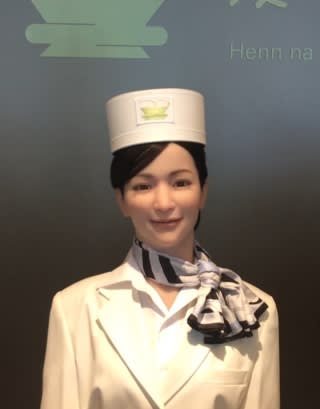 Crossed wires are just part of the experience of staying at a hotel where robots shoulder about 70% of the workload.

The hotel, which opened in July, sits atop a small hill by Huis Ten Bosch, a Netherlands-themed amusement park. From a distance, it looks like your average two-story building. Step inside the lobby, and you quickly realize the place is anything but normal.

"Welcome to Henn-na Hotel," a massive fluffy tulip says in Japanese when you walk in the door.

At the front desk, guests are welcomed by three receptionists: a 30cm-tall minirobot; a humanoid that looks like a Japanese woman; and an attentive dinosaur, which looks so real that toddlers hide behind their parents.

The check-in process is simple. Fill out and submit a form, enter your name on a touch panel, and have yourself scanned so you can use the hotel's face recognition system rather than a key.

You won't find anyone making a fuss about the view they want or their mileage status. The process moves at the receptionist's pace, with no time for small talk. For Mitsutaka Okamura, a 37-year-old father of three, it was all over a little too quickly. "I wanted to see how they move, but they were finished when I came back from the bathroom," he said.

"If there was a real receptionist, we would have asked a lot of questions," said Okamura's wife, Momoko.

After check-in, the porter -- a machine, naturally -- delivers your luggage to your room and returns to the lobby automatically. You can leave your coat and luggage at the cloak room, which is staffed by a huge robotic arm. And robots that resemble R2-D2, the "Star Wars" character, will tell you about events going on at the amusement park next door.

There are still human employees on hand to make sure things run smoothly. But eventually, management wants robots to handle 90% of the work, bringing labor costs to the bare minimum.

Droids aside, Henn-na Hotel features other examples of cutting-edge technology.

In the guest rooms, the temperature is controlled with 2.5-meter-high "radiant panels," which use electromagnetic waves to pull heat away from the body. Management says the system cools you from the inside, rather than blasting you with cold air.

While the building is chock-full of mechanical marvels, the designers ensured guests are never far from nature -- and some peace and quiet. Sitting on the balcony, they can gaze at lush greenery in almost dead silence, even when the hotel is fully booked.

The big question is how to keep guests coming back after the novelty wears off. While it finds its footing, the hotel has been offering ultralow rates. "At first, I thought the nightly rate of 15,000 yen was for one person, but it was for four, including my husband and two children," said guest Anna Komori. "If they keep it this cheap, I would come back."

The low price does mean fewer frills. The rooms come with no pajamas, no complimentary bottled water, no fridge and no TV -- though Wi-Fi and small tablet computers are available for free.

Repeat visitors can expect the experience to be different each time. In Japanese, the word hen means "strange" or "weird." But the Chinese character also means "to change." The plan is to make continual technical improvements.

In March 2016, the number of rooms is to be doubled to 144. The hotel is also thinking about deploying drones to deliver room service.