TOKYO/SINGAPORE -- Package delivery has long been a bottleneck for e-commerce in Southeast Asia, but things are changing -- thanks to startups offering various new ways to get orders into the hands of shoppers.

Neighbors' homes and "smart" lockers set up in stores are being used as alternative pickup locations, for instance, while ordinary consumers are helping deliver parcels in their neighborhoods -- to compensate for the region's generally underdeveloped logistics infrastructure, as well as the chronic shortage of delivery workers.

PopBox Asia Services' smart lockers are a growing presence in Indonesia. Rather ordinary looking lockers are linked to smartphone apps, motorcycle-delivery services and e-money systems. Customers can not only receive packages via the lockers, but also make payments and ship packages for return. Depending on his or her location, a user can flexibly select pickup and shipping sites. "I rely completely on it for both shipping and receiving," said a 34-year old Jakarta woman who loves online shopping.

The company operates the lockers at around 200 locations in Indonesia, including supermarkets and gas stations. The plan is to expand to 4,000 fueling stations, and to have mom and pop stores in crowded residential areas serve as drop-off and pickup sites.

This business model has grabbed the attention of big conglomerates as well as foreign companies. Indonesia's Salim Group, for example, has decided to use the lockers for its e-commerce business. PopBox has also launched operations in Malaysia by collaborating with local real estate group Sunway.

In Vietnam, a popular mobile app from delivery company Giao Hang Nhanh, or GHN, lets users request delivery by motorbike. Originally a package-delivery company, GHN has a nationwide network of logistics centers across the country. Its 7,000 or so registered drivers handle express services from the local center. In major areas like Ho Chi Minh City, items can arrive just an hour after ordering. 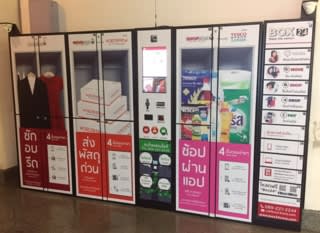 Lockers operated by WashBox24 in Bangkok provide multiple services such as grocery and laundry delivery.

In Thailand, lockers runs by startup WashBox24 in Bangkok let users not only drop off and pick up packages, but also collect freshly washed clothes and groceries ordered on its app. Since its original locker-based laundry service started in May 2013, the company has partnered with supermarket Tesco Lotus, hypermarket Big C and Kerry Logistics to broaden its services. Users can also pay utility bills at the lockers by scanning the bar code on the bill.

The business currently has around 100 lockers in Bangkok and aims to add 220 across Bangkok, Kuala Lumpur and Singapore in the near future. It may strike a deal with postal service Thailand Post, which would help expand its delivery lockers to over 3,000 just in Thailand.

Unlike elsewhere in the region, Singapore has a well-developed logistics infrastructure, but not enough delivery workers. So local startup Park and Parcel lets people pick up online shopping orders at a neighbor's home.

A 25 year-old private tutor in Singapore, named Peiyun Quek, often visits her neighbor, Faith Ng, to collect a package. Ng works as a "parker" for the company, which provides online shoppers with a list of alternative addresses to which to deliver packages. For a charge of 2.50 Singapore dollars ($1.80), users can specify a parker's address and later go there to pick up the parcel. Parkers earn S$1 for every package they receive.

Like Quek, users are usually full-time workers unable to receive packages at home during weekday office hours, when most deliveries take place. "It's very flexible. I can contact the parker directly and pick up my parcel during the nighttime and after work," Quek said. The startup aims to double its number of parkers to 1,000 by the end of the year.

Delivery for a specific date and time is not typical in Singapore. Consequently, long lines of people looking to receive packages at the post office are a common sight during lunch breaks. Homemakers as well as people who work from home are available to serve as parkers to alleviate the problem, and earn supplementary income.

Another mobile app, Singapore-based Qourier, mobilizes ordinary people as deliverers. The system has about 7,000 individuals registered as deliverers, handling distribution to customers in their proximity. A male college student who works as a deliverer calls it a quick way to earn some income.

Nomura International (Hong Kong) projects that the package delivery market for the six major Southeast Asian countries will more than double from 2015 levels to over $7.5 billion in 2020. Amid market expansion, investments in startups offering logistics and shipping services grew an estimated 270% on the year to $1.3 billion in 2016.

Some major e-commerce companies have tried and failed in the region. Japan's Rakuten, which launched operations in Indonesia in 2011, ended business last year in all four Southeast Asian countries where it had set up shop -- despite establishing its own motorbike-delivery services.

But now, as the popularity of smartphones and various delivery services brighten the outlook for the e-commerce industry, major players are seen starting operations in the region. Chinese giant Alibaba Group Holding, which bought Singapore-based e-commerce giant Lazada last year, has strengthened its logistics and payment services by teaming with local companies. Amazon.com of the U.S. is also preparing to launch businesses in Singapore and Indonesia.

The Southeast Asian e-commerce market is forecast to more than double from 2015 levels to $25 billion by 2020, according to U.S. research company Frost & Sullivan. Startups in related fields will have to work on raising delivery quality and ensuring secure management of personal information if that predicted growth is to become a reality.