They're smaller, more willing to take risks and have global ambitions HONG KONG Casino gambling has always been a cross-border business in Asia.

The many gaming parlors of Macau, the region's oldest casino hub, could hardly have survived for so many decades just serving the small territory's population, today barely a tenth that of Singapore. Most customers come from mainland China, Hong Kong or further afield.

Sociedade de Turismo e Diversoes de Macau, which previously held the city's casino monopoly, leveraged that position to establish a network of properties in Vietnam, North Korea, Portugal and other countries. Genting, STDM's closest peer, has similarly built off its casino monopoly in Malaysia to expand into Singapore, the Philippines, Australia, the U.S., the U.K. and the Bahamas. 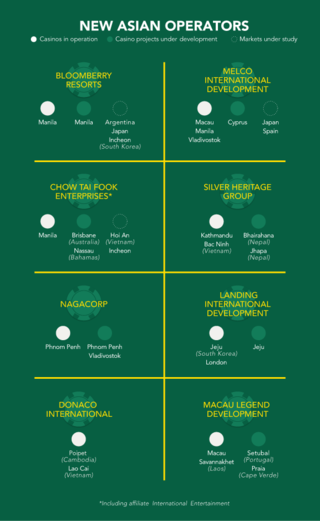 Now a new generation of Asian operators is following in the footsteps of STDM and Genting to build their own international gaming empires. However, as these companies have yet to build up comparable track records or financial firepower, they generally shy away from high-stakes "beauty contests" for government licenses, like the upcoming one in Japan, in favor of smaller, low-profile investments that a Genting or Las Vegas Sands might ignore or consider too high-risk.

TARGETING THE FRONTIER "We're an emerging markets group, if you consider that Macau, [South] Korea and Singapore are mature or saturated markets," said Tim Shepherd, co-founder and president for business development and marketing of Silver Heritage Group. "We look at the frontier." The Hong Kong-based company, which listed last year on the Australian Securities Exchange(ASX), operates casinos in Vietnam and Nepal and previously ran slot machine halls in Laos and Cambodia.

Commented Timothy McNally, chairman of NagaCorp, last month, "We know there will be a lot of competition in a jurisdiction like Japan." His Hong Kong-listed company has a monopoly in Phnom Penh, is building a casino hotel in Vladivostok, Russia, and recently bid for a license in Cyprus. "We'll see how [Japan] unfolds," McNally said. "[But] we're always seeking new opportunities because we see ourselves as a growing company."

In many cases, the frontiers these new operators' targeting are literal: locations just over the border from places where casinos are banned or locals barred from entry. As the customers in such cases are mostly or exclusively outsiders, authorities are usually more relaxed than in markets where they would have to be concerned with gambling's local impact.

"Las Vegas was the true original border story, on the border with California, and Macau was much the same, with gambling not allowed in mainland China," Shepherd said. His company is finishing construction of a casino hotel just across the border from Uttar Pradesh, India's most populous state and one of many where gambling is illegal.

A number of the new operators are offshoots of the previous generation. Melco International Development, which now oversees casinos in Macau, Manila and Vladivostok, is headed by Lawrence Ho, a son of STDM founder Stanley Ho, and previously was a family vehicle for nongaming businesses. Chow Tai Fook Enterprises, which is to open a casino resort next month in the Bahamas and is backing projects in Australia and Vietnam, is owned by the family of late Hong Kong tycoon Cheng Yu-tung, a major STDM shareholder. Donaco International, an ASX-listed company with casino hotels in Cambodia and Vietnam, is run by a grandson of Genting's founder.

Other new operators have been birthed by the exit of established players from new projects. Bloomberry Resorts' Solaire Casino in Manila was originally managed and part-owned by a group of former Las Vegas Sands executives. The partnership collapsed, leaving Bloomberry to run the resort on its own. Bloomberry has since bought a casino on the South Korean island of Jeju and looked at other projects in South Korea, Japan and Argentina. The same group of former Sands executives were to manage the Bahamas casino resort that Chow Tai Fook took over in December after its developer went into bankruptcy protection.

Hong Kong-listed Landing International Development originally broke into gaming as a joint venture partner of Genting on two projects on Jeju. Landing bought out Genting's stake in the casino in the Hyatt Regency Jeju Hotel and took over management in 2015. Last November, Landing took on Genting's stake in their larger casino resort project on Jeju when the Malaysians decided to focus on Japan. Officials from Landing, which also bought a small London casino last year, expressed confidence in their ability to manage the Jeju resort on their own, citing their growing gaming management experience.

"It is our vision to be a leading global player in the tourism, leisure and entertainment industry," said Landing Chairman Yang Zhihui at the time. "We plan to pursue growth by continuing to invest in integrated resort developments in the region."

GREENER PASTURES Companies that manage high-roller betting rooms in SJM casinos, including Jimei International Entertainment Group, Suncity Group and Iao Kun Group Holding, have also been looking to branch out into casino operation overseas. This has been driven in part by the recent deep slump in VIP gambling in Macau due to China's anti-corruption crackdown and the companies' keenness to take advantage of their relationships with high rollers from China and elsewhere. The investors behind Best Sunshine International, Saipan's new monopoly casino operator, control Macau VIP junket agency Heng Sheng Group.

As with Saipan, key factors that the new operators look at in evaluating possible opportunities include the degree of exclusivity as well as the tax rate and revenue potential, according to NagaCorp's McNally. Steven Gallaway, managing partner with gaming consultancy Global Market Advisors, said NagaCorp's diversification effort "illustrates a wise strategy to grow."

With ever more Asia-Pacific governments yielding to the temptations of casino gambling, such opportunities look likely to continue to multiply.