CHIBA, Japan -- Nissan Motor is making a fresh bet that global demand for electric vehicles is finally about to blossom -- the Japanese automaker unveiled the second generation of its Leaf EV on Wednesday.

With a vastly extended driving range, a sportier and sleeker look, and a cheaper-than-rivals sticker price, the new Leaf is intended to appeal to the mass market -- especially in China -- as rival EV maker Tesla serves more of the luxury segment.

While Nissan was a pioneer in mass-market electric cars, it has recently been overshadowed by U.S. automaker Tesla, which has introduced a range of stylish, high-performance cars. Nissan is now trying to reassert its leadership.

"The Nissan Leaf continues to be the true mass-market leader," said Daniele Schillaci, head of Nissan's electric vehicle business, at a premiere event in Chiba Prefecture, near Tokyo, on Wednesday. He emphasized Nissan's track record of safety and reliability, and 84 years of manufacturing history.

"When the Nissan Leaf first premiered, our competitors said we were crazy. Yet today, almost every automaker is following our lead."

Analysts agree that Nissan and Tesla are chasing different markets. "Tesla's customers are more in the premium zone, while the Nissan Leaf is in the volume zone, competing with models like the Toyota Prius," said Takaki Nakanishi, a Tokyo-based auto analyst. Japan automakers to rev up their green push in China

Nissan Senior Vice President Asako Hoshino, who runs the company's Japan operations, said Nissan aims to double or triple Leaf sales with the new model. Auto analyst Nakanishi considers that target a little unambitious, given the car's vastly improved capabilities. But he said the price may still be a little on the steep side for a volume car, even after government incentives are taken into account.

The biggest change with the current generation is in driving range. At 400km per charge, it is a sharp improvement on the current model's 280km, and matches or beats comparable Tesla and GM models. 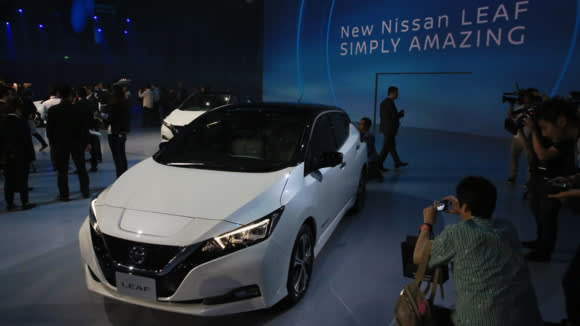 The new Leaf also got a comprehensive makeover and has a sleeker, sportier look -- an important change, considering its main competition comes from Tesla.

The second-generation Leaf also has several autonomous driving features, such as self-parking and one-pedal driving, which allows the driver to stop the car by simply lifting the foot off the accelerator.

These features, however, are not just aimed at the U.S., the Leaf's biggest market, but also at China, a country many people see as the most promising market going forward.

"We expect China to be the most promising EV market for everyone," said Christopher Richter, senior auto analyst at CLSA in Japan.

Shipments of the Leaf currently make up less than 1% of Nissan's 5.6 million unit global sales. Carlos Ghosn, the head of the alliance that includes Nissan and Renault SA, once predicted that EVs will account for 10% of the company's global sales by 2020 -- a goal the automaker is unlikely to meet.

That has also prompted more automakers to announce plans to release their own EVs, including Toyota Motor and Daimler AG's Mercedes-Benz. Meanwhile, Tesla has stolen Nissan's thunder by unveiling a range of cool-looking, high-performance vehicles, though they cost more than the Leaf.

The launch event came after the Nissan-Renault alliance said last week that it will team up with China's Dongfeng Motor Group in the production of compact EVs in China. The partners will develop an electric mini-SUV for the Chinese market using the French-Japanese alliance's jointly designed platform.

Compact EVs are popular in major Chinese cities like Beijing and Shanghai, as they sell for about half the price of Nissan's Leaf.

Nissan is overcoming new challenges facing the auto industry, such as new technologies, intensifying price competition and globalization, by tapping into its prowess in international partnerships, which it has acquired through years of working with Renault, a 43% owner of Nissan.

"Its management knows how to work well with international partners," Richter said of Nissan. "This cooperation should help it navigate government hurdles more easily than its competitors."