TOKYO -- As far as business years go, fiscal 2013 was a good one for Japan's automakers -- except for Nissan Motor.

Various issues saw Nissan reduce its earnings projections for fiscal 2013, but the company is aiming to make a comeback year out of fiscal 2014, which began April 1. A major element of this is the revival of the Datsun brand in emerging economies.

Carlos Ghosn, who is CEO of both Nissan and the French automaker Renault, has been true to his nickname, "the flying executive," as he jets around the world to manage the Renault-Nissan alliance. 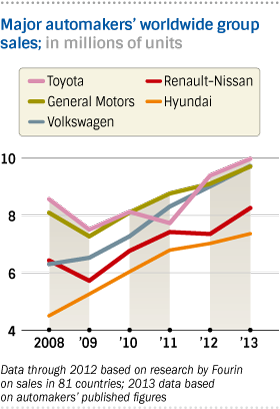 Ghosn spent Tuesday in Japan, addressing new recruits in a welcoming ceremony in the afternoon in Yokohama and appearing on a TV show later that night in Tokyo. Early the next morning, he was on a flight to Seoul. By Friday, he was in Moscow for the Datsun launch in Russia.

Nissan retired the Datsun brand three decades ago, but is now bringing it back as the company's strategic low-cost vehicle brand for emerging countries.

A limited-feature Datsun sedan will go on sale this summer in Russia at a tentative price of 400,000 rubles ($11,340), which is about 50,000 rubles less than the lowest-priced Nissan sedan available in the country.

The future still looks bright for the Russian auto market despite recent hiccups. Ghosn says Nissan is aiming to triple sales in the country over the next three years from roughly 150,000 units in 2013, and to double its market share from 5%. A third of these sales are planned to be through the Datsun brand.

More work to do

Nissan estimates that emerging economies will make up 60% of worldwide auto demand by fiscal 2016. As such, Nissan is beginning its Datsun rollout in Russia, India, Indonesia and South Africa.

Datsuns went on sale in India last month, ahead of other markets. The vehicle has been "popular because it is cheaper than other similar sized cars," a dealer in Mumbai said.

In fiscal 2013, Nissan reduced its earnings projections due to quality issues in the U.S., delays in new car releases and ballooning costs of production capacity increases around the world.

The current fiscal year marks the halfway mark for Nissan's "Power 88" six-year business plan, which aims to raise the company's operating profit margin to 8% and capture an 8% global market share.

Both of these figures currently stand at about 6%. As Ghosn recently put it, Nissan has more work to do.

Nissan added and expanded 10 or so factories in emerging countries and other locations last year. These investments are expected to start paying off from this year.

One of these factories is in the Russian city of Togliatti. Cutting-edge production lines have been introduced in the facility, which belongs to Avtovaz, a Russian automaker jointly acquired by Renault and Nissan.

As of April 1, Nissan and Renault consolidated production, development, procurement and human resources operations. This means the decision-making processes for both companies' business strategies, including development of key components and the assignment of models to be made at different plants, is now integrated.

This marks a major shift in the Renault-Nissan alliance. Despite controlling a 43.4% stake in Nissan, Renault had allowed the Japanese automaker to draw up its own business strategies.

While appreciative of Renault's help in times of trouble, some at Nissan had hoped the company would one day become independent again. This hope has faded, as Ghosn has decided to reorganize the alliance into a tighter unit in order to make it more competitive on the global market.

Renault and Nissan sold a combined 8.3 million vehicles worldwide in 2013. The alliance, using the advantages of its economies of scale, is looking to take on the so-called global big three -- Toyota Motor, Volkswagen and General Motors -- each of which has sales of nearly 10 million units.

If Ghosn is reelected to Renault's board at the company's general shareholders meeting this spring, as is expected, he will likely remain at the helm of Nissan and Renault for at least the next four years. He has already led Nissan for 15 years, making him the longest serving non-founding top executive of any major global automaker. The next four years will likely determine his legacy, and the fate of Nissan's turnaround.