Ghosn arrest spurs war of words between lawyers and prosecutors

Defense team condemns detention while out on bail 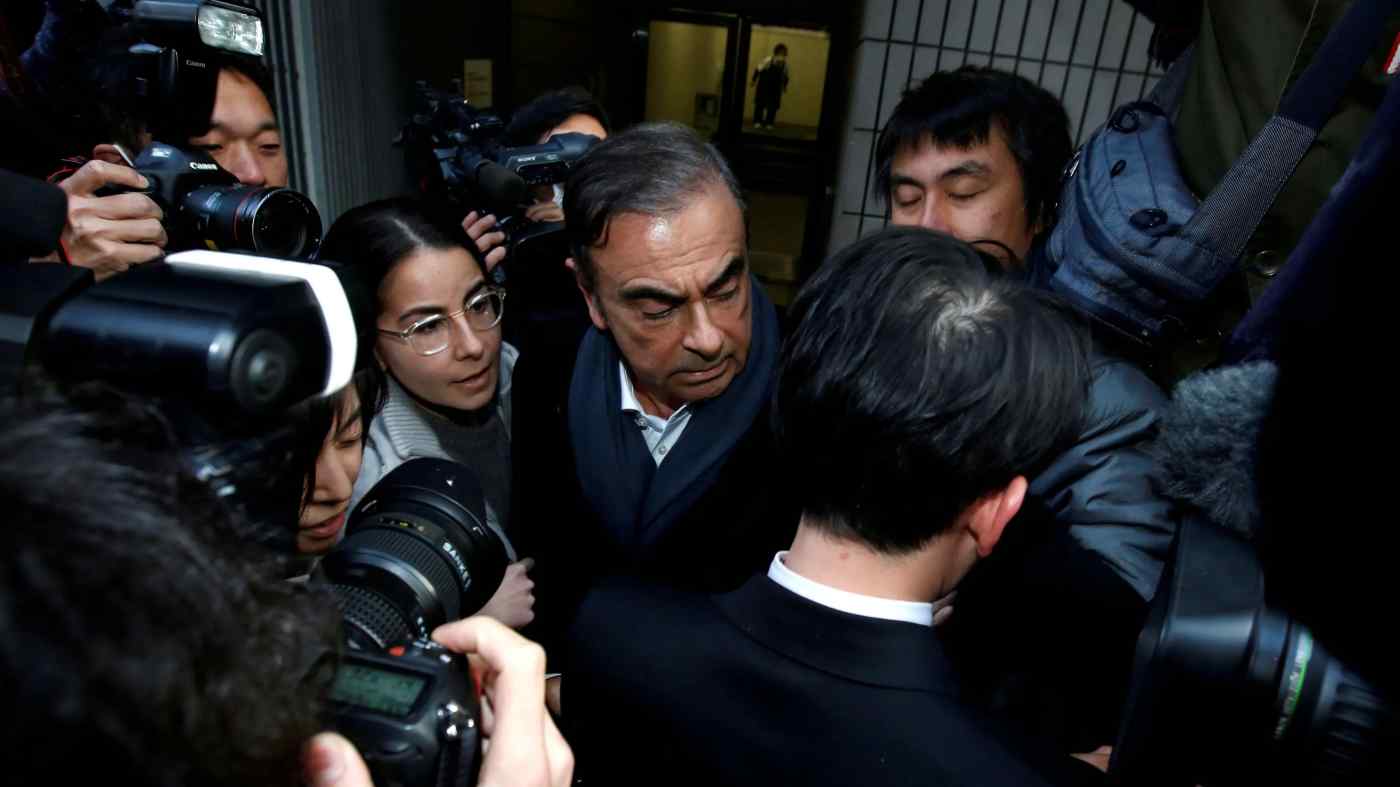 TOKYO -- Lawyers for fired Nissan Motor Chairman Carlos Ghosn on Friday questioned the legitimacy of his latest arrest, criticizing prosecutors' argument that his freedom must once again be forfeit to advance the probe into his alleged financial misconduct.

His defense submitted an appeal against his detention to the Tokyo District Court. But the court decided Friday to let prosecutors hold him for 10 days through April 14.

Ghosn was first arrested in November and only released on bail on March 6 after more than 100 days in jail. He had since been living in a Tokyo residence known to the court with camera surveillance, restricted internet access, a travel ban and no contact with people involved in the case.

"It's regrettable that the court reversed itself from when it granted bail," said Junichiro Hironaka, who leads Ghosn's defense team. A complaint he lodged later that day was rejected.

It is extremely unusual for a suspect to be detained again after getting out on bail. "The district court at one point decided on release, so it has already been determined that there is no risk of flight or destruction of evidence," Hironaka said Thursday, shortly after Ghosn's rearrest. "There's no rational basis for detention."

Prosecutors insist that the move was necessary. "We believe that there is a risk of flight and destruction of evidence," said Shin Kukimoto, deputy chief prosecutor for the Tokyo District Public Prosecutors Office, on Thursday. "We also took into consideration such circumstances as the over 500 million yen ($4.47 million) in damages to Nissan."

There had been some initial hesitancy in the office about bringing Ghosn in again, given heavy international criticism of his prolonged initial detention. But he now stands accused of funneling Nissan funds through a company in Oman involving a separate set of associates who do not fall under court restrictions limiting his contacts. Prosecutors did not want to give them a chance to coordinate stories.

The 1 billion yen Ghosn posted as bail applies only to charges already filed against him and will not be returned with his latest arrest.

French media have focused on the unconventional aspects of the arrest, as well as harsh conditions at Japanese jails. But they are less critical than before amid new allegations of misconduct by Ghosn in France.

The topic also came up at a Friday meeting between French Foreign Minister Jean-Yves Le Drian and Japanese counterpart Taro Kono in northwestern France, though the Japanese ministry did not share details.

Moving forward, "the court could change its decision on Ghosn's detention based on how the probe, indictments and trial preparations play out," said Gishu Watanabe, who writes under the pen name Osamu Watanabe, a Konan University professor who studies criminal justice.

Prosecutors plan to further investigate the 560 million yen allegedly funneled through the Omani company into a bank account largely controlled by Ghosn. It will also probe whether more money made its way to him through this channel, given that a Nissan unit had paid about 3.5 billion yen to the company since 2009.

They are expected to request a 10-day extension to Ghosn's detention before April 14 but are concerned that the court could say no.