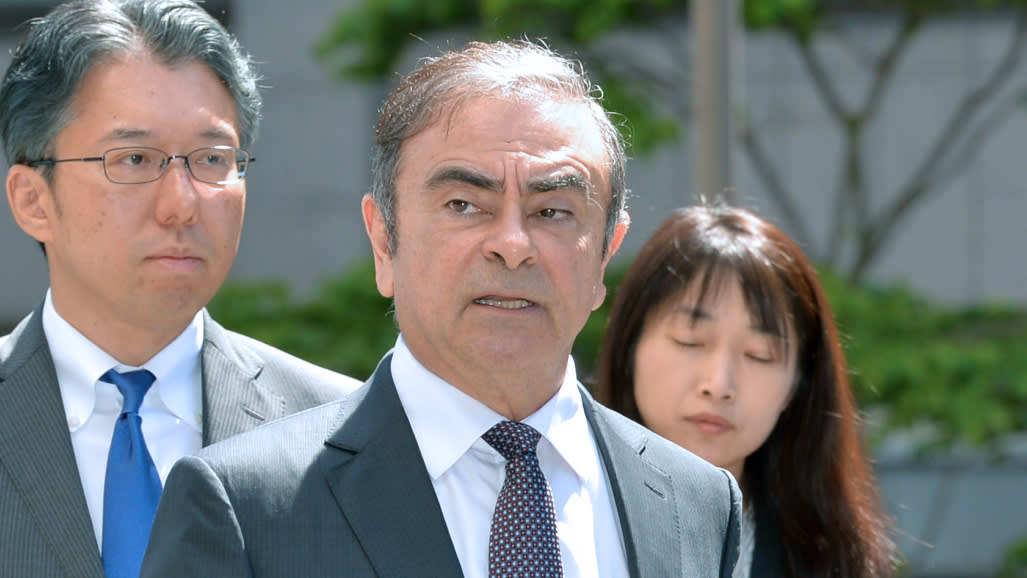 Former Nissan Chairman Carlos Ghosn arrives at the Tokyo District Court for a pre-trial hearing on May 23. (Photo by Toshiki Sasazu)
May 23, 2019 14:22 JST | Japan
CopyCopied

Wearing a dark suit with a tie, 65-year-old Ghosn entered the court with four of his lawyers, at around 9:30 a.m.

The pretrial hearing, joined by a judge, prosecutors and lawyers, was held to narrow down points of dispute in the case against Ghosn over alleged aggravated breach of trust.

According to the indictment, Ghosn transferred personal losses of 1.85 billion yen ($16.8 million) from derivatives contracts to Nissan during the 2008 global financial crisis, and had the automaker pay $14.7 million to a Saudi businessman who extended credit to him.

On May 14, prosecutors requested the court revise counts on the indictment, saying the Saudi businessman, Khaled al-Juffali, provided about 2 billion yen to Ghosn around the same time he transferred the losses.

Prosecutors also said Ghosn had presented a letter of credit, guaranteed by Juffali, to a bank as collateral when he again made himself the party to the contract, instead of Nissan.

During Thursday's pretrial procedure, closed to the media, lawyers likely asked prosecutors to offer explanation for the revision and to swiftly disclose evidence.

As for the alleged aggravated breach of trust, Ghosn is also accused of having a Nissan subsidiary in the United Arab Emirates pay $10 million to a distributor in Oman between July 2017 and last July, and having $5 million of that transferred to a savings account at a Lebanese investment firm that Ghosn effectively owns.

A pretrial procedure for his alleged violation of the financial instruments law is slated to take place on June 24. In that case, Ghosn, his former close aide Greg Kelly, and Nissan are accused of underreporting Ghosn's remuneration by around 9.1 billion yen in the company's securities reports submitted to Japanese regulators over the eight years through March last year.

Ghosn, credited with saving Nissan when it was teetering on the brink of bankruptcy in the late 1990s, has lost all the posts he held at Nissan. He has denied all allegations.