TOKYO -- Carlos Ghosn's newly appointed defense lawyer said his team proposed to a Tokyo court last Thursday that in exchange for bail, his client would come under visual surveillance to limit his ability to contact others.

Two previous bail requests by Ghosn's former defense team were rejected. The latest request, which suggests subjecting the ousted Nissan Motor chairman to constant monitoring, is offering stricter conditions in the hopes of swaying prosecutors. Ghosn, who has been detained for nearly four months, has a "strong wish to be released as soon as possible," the lawyer said.

A Tokyo court is expected to announce its decision on Tuesday at the earliest.

Attorney Junichiro Hironaka said at a press conference on Monday that the legal team submitted "our own convincing application, making sure that any destruction of evidence or escape will not be possible." The use of surveillance cameras and computers is a way to "prohibit [Ghosn] from exchanging information with other parties," he added.

In his bail applications, Otsuru had proposed that Ghosn wear a GPS ankle monitor, check in with the public prosecutors' office daily and surrender all three of his passports -- French, Lebanese and Brazilian.

Hironaka criticized Japan's judicial system, saying that his client was being kept in jail due to prosecutors' inability to confidently build a case against him. This is "extremely unfair," as it undermines the defendant's right to protect himself, he claimed.

Hironaka also criticized Nissan's handling of the case, as he did at his first press conference last month. "It is very peculiar that Nissan brought issues to Tokyo prosecutors which date back 10 years ago," he said.

Ghosn's four children also criticized Nissan in a statement issued on Monday. Referring to Nissan's CEO Hiroto Saikawa, without directly naming him, they said that "it is extremely disappointing that a long-trusted coworker of my father's would slander him by claiming falsely that my father does not love and respect Japan." Saikawa had given interviews to media outlets including Nikkei. 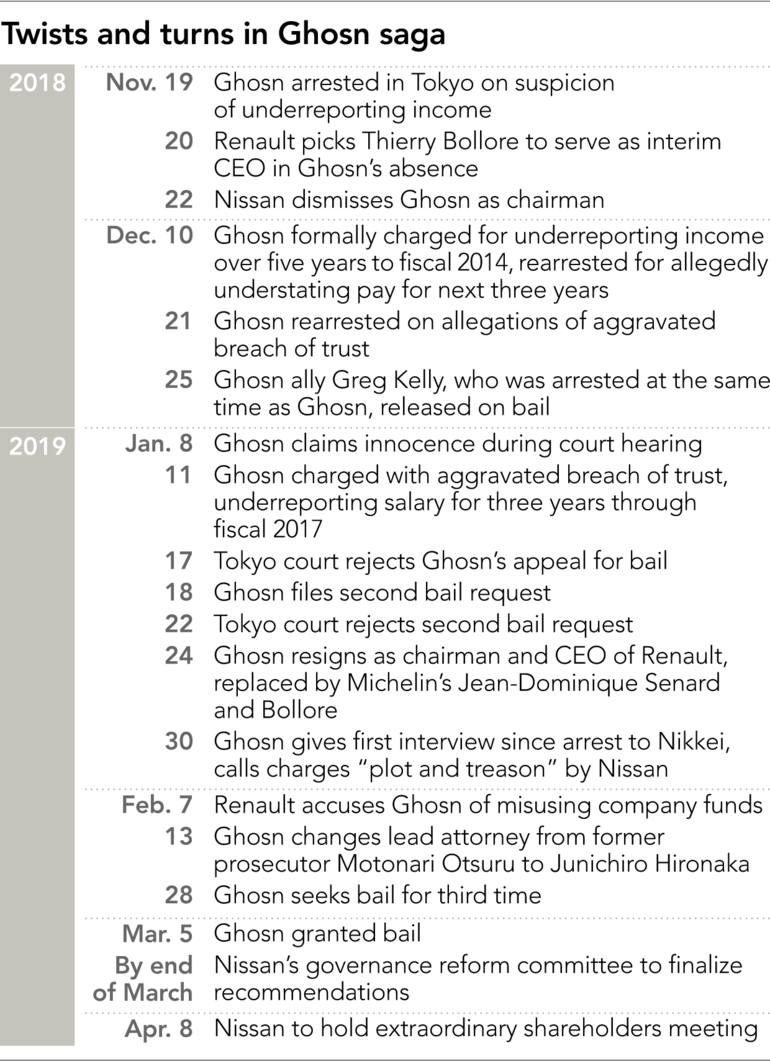 In several interviews, Saikawa blamed Ghosn for neglecting his responsibilities as chairman. Saikawa told a Japanese weekly magazine Shukan Bunshun that he had previously believed Ghosn was respectful toward Nissan's Japanese customers and workers. "But I am filled with strong doubt whether that was really true," he said.

Ghosn denies all allegations. In the first interview after he was taken into custody, he told Nikkei that he had "no doubt" his arrest was the result of "plot and treason" by Nissan executives. Hironaka also called it "strange" that the prosecutors waded into the matter, insisting Ghosn had followed all company procedures.

The prosecution argues Ghosn breached trust by transferring about 1.85 billion yen ($17 million) in personal losses from foreign exchange contracts to Nissan. The allegation also covers payments of 1.6 billion yen in company funds to a Saudi acquaintance of Ghosn's from 2009 to 2012.

In addition, the auto executive has been charged for understating his income over two periods -- three years from fiscal 2015 to 2017, and five years from 2010 to 2014. All of this adds up to around 9.1 billion yen in underreported compensation over eight years.