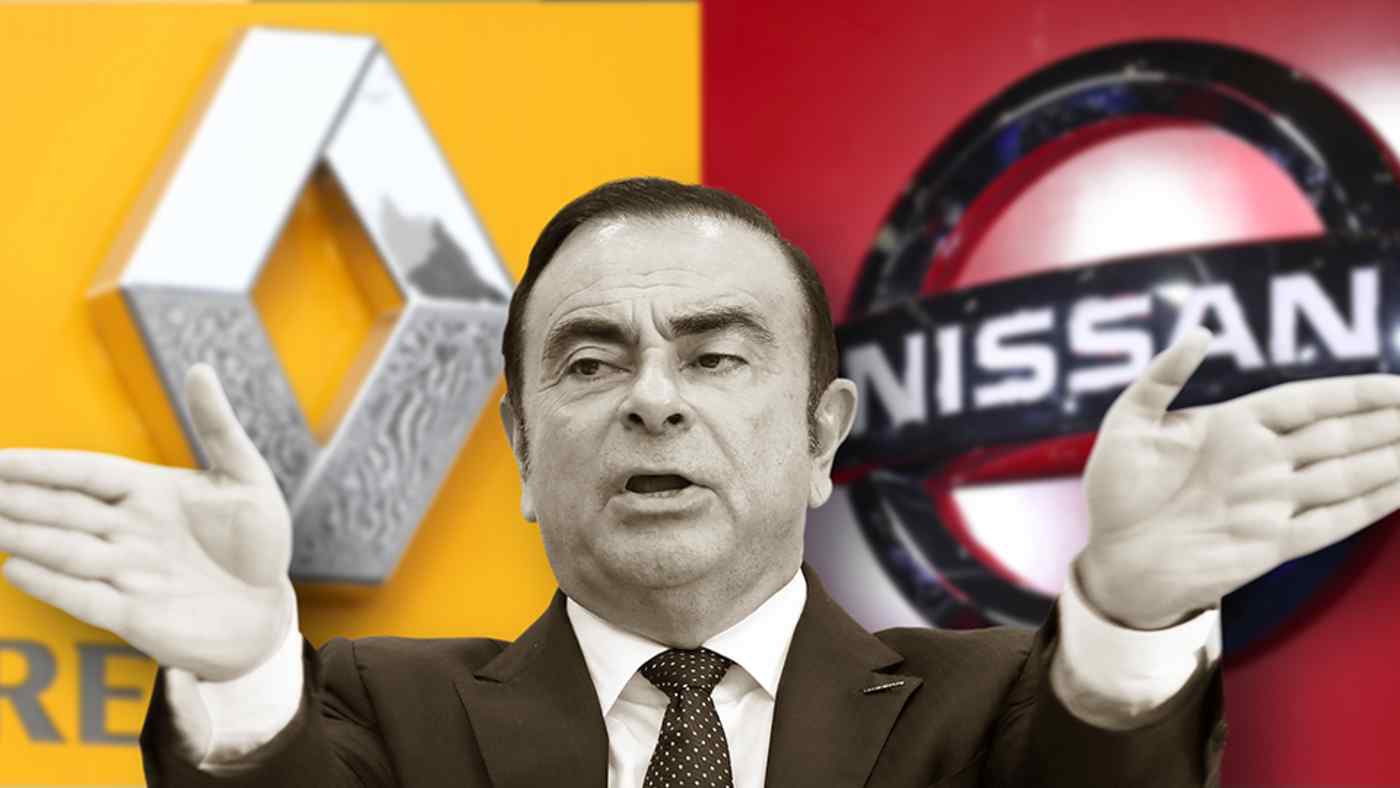 The arrest of Carlos Ghosn has plunged the Nissan-Renault alliance into crisis as there appears to be no one executive capable of replacing him.
HIDEFUMI FUJIMOTO, AKITO TANAKA and MASAYASU ITO, Nikkei staff writersJanuary 14, 2019 13:00 JST | Japan
CopyCopied

TOKYO -- The alliance between Nissan Motor and Renault, once touted as a rare successful international business tie-up, has slipped further into confusion since Carlos Ghosn was arrested nearly two months ago.

The Japanese and French automakers have carried out many joint activities, including new-vehicle development and parts and materials procurement. But now, the bill for depending on Ghosn as absolute leader has come due.

Nissan President and CEO Hiroto Saikawa has often stayed in his office on the 21st floor of the company's headquarters in Yokohama until late into the night since Ghosn's arrest, discussing the case with lawyers and meditating on it alone.

Saikawa was informed of Ghosn's alleged financial misconduct only just over a month before the arrest. While the arrest sent shock waves across the world, Saikawa was also caught off guard.

Saikawa climbed to the top at Nissan by carrying out tasks successively assigned to him by Ghosn. Now, with no one giving him instructions, he has yet to provide a sense of direction for the automaker.

The origin of the absolute leader traces back 20 years.

In 1999, then-Renault Chairman Louis Schweitzer told Ghosn just before concluding a tie-up agreement to bail out Nissan that he would not sign the deal if the Brazilian-born executive refused to go to Japan. Ghosn had made his name as a cost-cutter.

DaimlerChrysler also came out in support of Nissan, with a possibility of acquiring a majority stake. Renault was apparently desperate, as Schweitzer had promised then-Nissan President Yoshikazu Hanawa that the French automaker would hold its stake down to 36.8%. Nissan could maintain its identity as a Japanese manufacturer through its tie-up with Renault, he told Hanawa. The fate of Nissan-Renault then rested in the hands of one man rather than the workings of the capital tie-up.

Hanawa asked Ghosn to come to Japan "not as a Renault man, but as a Nissan man." Ghosn quit Renault and joined Nissan. After discussions with many employees, he worked out the Nissan Revival Plan and stressed that solutions to the company's woes could be found on the factory floor. The plan enabled Nissan to stage a sharp rebound.

Ghosn concurrently took the post of CEO at Renault in 2005. With the retreat of Hanawa and other Nissan executives, including co-Chairman Itaru Koeda, from the vanguard, Ghosn's hand was strengthened.

In July 2006, Ghosn announced the launch of tie-up negotiations between the Nissan-Renault alliance and American carmaker General Motors. Asked by a reporter whether he wanted to create the world's largest automaker and become its CEO, Ghosn denied that the decision to start the talks was his alone. But Nissan's boards gave him full powers.

While the negotiations fell apart, Nissan and Renault integrated production, procurement and certain other operations in 2014. In 2016, the alliance invested in Mitsubishi Motors, setting an eye toward becoming the world's biggest automobile group, with annual sales of 10 million vehicles.

With Ghosn having the final say on decisions by the tripartite alliance, project managers were reportedly required to report progress to him.

Ghosn has evidently changed since 2010, after the global financial crisis triggered by the collapse of Lehman Brothers, many senior Nissan executives said.

Under his leadership, Nissan released the world's first all-electric car for the mass market, the Leaf, in 2010. But combined sales by Nissan and Renault totaled only 70,000 units three years after the Leaf's debut, despite the alliance's target of boosting them to 1.5 million units in six years.

Ghosn put right-hand man Toshiyuki Shiga, then chief operating officer, in charge of shoring up sales of the Leaf. But in November 2013, seven months after the appointment, Ghosn relieved Shiga of the COO post.

With the 2010s starting, Nissan shifted its management priority from reconstruction to growth. In line with this, the Nissan-Renault alliance acquired AvtoVAZ, the biggest automaker in Russia, at the request of Russian President Vladimir Putin. It also started tie-up talks with Ford Motor of the U.S. on fuel cell vehicles.

But as Ghosn discharged close aides, operations suffered. With pressure to produce results growing, he replaced one senior executive after another and further tightened his grip.

Ghosn has built the Nissan-Renault alliance into a machine that cannot function without him. The logical endpoint would be "management integration of Nissan and Renault," an executive at the Japanese automaker said.

Ghosn reportedly formed a "private team" of major American bankers and others to quietly work out an integration scenario. At a Nissan board meeting last September, he said only that he would like to advance the alliance.

But a veteran Japanese executive feared that Ghosn would advance his plan for management integration on his next visit to Japan, warning that Nissan would be absorbed by Renault unless it took countermeasures.

Suspicions grew stronger last spring of Ghosn having designs on Nissan. Around the same time, a top-secret team set up by Nissan -- prompted by information about Ghosn's alleged misconduct provided by a whistleblower -- began working to topple him in cooperation with the special investigation squad of the Tokyo District Public Prosecutor's Office. On Nov. 19, prosecutors arrested Ghosn upon his arrival at Tokyo's Haneda Airport.

After relying on Ghosn for so long, Nissan has seen its management distorted in ways not easily corrected.

With an automobile using some 30,000 parts, a carmaker plans and develops a model with an eye on five years down the road. Renault, Nissan and Mitsubishi have a total of nearly 100 models. While a huge number of projects are always underway, Ghosn's iron-fisted rule made it possible to balance demands by the three partners and make the best choices for the alliance as a whole.

As the Ghosn case involves such complications as Japanese- and English-language documents as well as cross-border transactions, "more than half a year may be needed before the first trial hearing," said Motonari Otsuru, head of Ghosn's Japan-based legal team.

During a court hearing held on Jan. 8, the former Nissan chief expressed his readiness to continue fighting in court. Ghosn said he looked forward "to beginning the process of defending myself" and declared himself "innocent of the accusations made against me," according to the text of his statement.

If Ghosn is released on bail, he may launch a counterattack on Nissan's management.

Neither Nissan nor Renault seems to have anyone capable of putting the alliance back on track.

The Japanese automaker was supposed to hold top-level talks with Daimler in late November to discuss plans for a Mexican joint-venture factory that has suffered from falling demand for large vehicles in the U.S. and uncertainty over the future of the North American Free Trade Agreement. Months after Ghosn's arrest, the companies have yet to reschedule.

Nissan directors decided at a Jan. 10 board meeting to expand the scope of decisions requiring their approval. The company has already set up a committee, made up largely of outsiders, to overhaul decision-making in appointments and compensation to prevent the rise of another charismatic leader with outsize influence like Ghosn.

The 20-year-old alliance will quietly collapse if it cannot find a way out of its predicament.

The original text has been revised to clarify why Nissan set up a top-secret investigation team.