TOKYO -- Nissan Motor's board on Thursday fired Carlos Ghosn as chairman and representative director, ousting the main architect of the automaker's alliance with France's Renault and Japanese peer Mitsubishi Motors.

The decision was approved by all seven of the nine board members attending, in the absence of Ghosn and his right-hand man, Greg Kelly, both of whom have been held by prosecutors for investigation over allegations of understating Ghosn's pay in financial statements.

In the meeting that lasted for three and a half hours, the board also voted to remove Kelly as a representative director.

For now, there will be no replacement for Ghosn. CEO Hiroto Saikawa was widely expected to be named interim chairman, but the board stopped short of doing so.

Ghosn’s departure is likely to ignite a power struggle between Nissan and Renault, embroiling the latter's top shareholder, the French government.

Nissan sees this as an opportunity to increase its influence within the 19-year-old partnership to a level more commensurate with its sales and corporate value. For the French government, it is a chance to boost its influence over Nissan, perhaps through an outright merger between the two automakers, an idea Nissan fiercely opposes.

At Thursday afternoon's board meeting, members were shown detailed evidence of the alleged wrongdoing by Ghosn and the methods he used. The two Renault-related board members participated via video conference.

The two former Renault executives were initially skeptical about Nissan's intention to fire Ghosn, a source said. But as the evidence supporting claims that the chairman misused company money and hid his pay was laid before them, their attitudes changed.

"Does everybody agree?" Saikawa asked around 7:30 p.m. The vote to fire the chairman was unanimous. Nineteen years after the Frenchman was sent from Renault to rebuild Nissan, the legendary cost cutter's tenure at the Japanese automaker came to an end.

Ghosn officially remains Renault's chairman and CEO, as the French government says there is not enough information to justify removing him. But given that the evidence presented by Nissan apparently swayed the two Renault-related board members to vote for Ghosn's dismissal, it may influence the French automaker's decision as well. 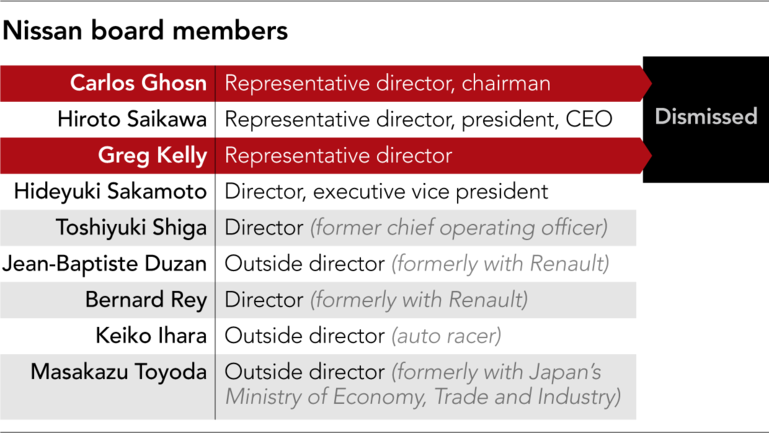 The Nissan board set up an advisory committee that will propose nominations for the chairman position. The committee will be headed by independent director Masakazu Toyoda, a former bureaucrat, and will include the company's two other outside directors, former race car driver Keiko Ihara and Jean-Baptiste Duzan, a former Renault executive. The new chairman is expected be elected by the end of the year.

On Thursday, new allegations emerged regarding Nissan payments to Ghosn's elder sister in the name of consulting fees. Sources allege she was paid hundreds of thousands of dollars worth of fees, but an internal probe was unable to find any trace of contribution.

It also emerged that the sister was living in the beachfront condominium in Brazil that was purchased with Nissan money.

The balance of power among Nissan's directors now becomes a focus. Renault may send successors to fill the board's two vacated seats in a bid to maintain its influence over its Japanese partner. The removal of Ghosn and Kelly left Saikawa as the only executive with the representative powers at Nissan. The automaker intends to add more representative directors, but will likely face a battle over whom to appoint.

Ghosn's ouster has large implications for the Renault-Nissan-Mitsubishi alliance.

The decision-making powers of the triple alliance lie in Amsterdam-based strategic management company Renault-Nissan B.V., a 50-50 venture between Renault and Nissan. Matters such as new vehicle development and parts procurement are given the green light there.

Company rules note that the Renault CEO doubles as the head of RNBV, according to sources, and Ghosn -- as head of Renault -- commanded control over the alliance through this structure.

The heads of the three companies met monthly. But rather than decide by majority, it was Ghosn who called the shots.

That structure has sometimes led to Renault-friendly decisions that left Nissan leaders puzzled. For instance, Nissan's mainstay Micra compact was scheduled to start production in India, but was switched to a French Renault factory.

If Ghosn were to leave the CEO post at Renault as well, his replacement at the French automaker would take over the role at the Dutch management company. But Nissan could push for a change to the government structure.

Nissan may also seek to increase its current 15% stake in Renault, which carries no voting rights, with the aim of establishing a more equal partnership. Nissan is 43% controlled by its French counterpart. If Nissan increased its stake in the French company to at least 25%, Renault's voting rights in the Japanese automaker would be nullified. That level of shareholding would give Nissan a controlling influence, thereby achieving parity with Renault.

But the French government appears keen to maintain the Renault lead, considering the huge workforce that Renault employs in its home market.

Nissan issued a statement Thursday in which it "confirmed that the long-standing alliance partnership with Renault remains unchanged and that the mission is to minimize the potential impact and confusion on the day-to-day cooperation among the alliance partners."

Thursday's decision came in response to Ghosn's arrest in Tokyo on Monday. The high-profile executive, who led Nissan in various capacities since 2000, faces allegations of understating his compensation in financial reports, diverting investment money for personal use and misusing company funds.

As the automaker scurries to contain the scandal and strengthen its governance, the board decided to establish an independent advisory committee made up of lawyers and outside experts. The panel is expected to not only investigate Ghosn's alleged misconduct but also consider ways to prevent similar behavior and review executive compensation.

Mitsubishi Motors is to convene a board meeting Monday to remove Ghosn as its chairman. Renault announced on Tuesday that its board had appointed Chief Operating Officer Thierry Bollore as acting head in the absence of Ghosn, its chairman and CEO.

Ghosn stands accused of understating his income by 5 billion yen ($44 million) over five years, starting in fiscal 2010. Over 10 Nissan executives have voluntarily agreed to answer prosecutors' questions, including Saikawa and former Chief Operating Officer Toshiyuki Shiga, also a board member.

Nissan was rescued by Renault in 1999, but has far outgrown its parent with a dramatic turnaround. Nissan’s market capitalization is nearly double that of Renault now.