TOKYO -- Hiroto Saikawa, chief executive of Nissan, should have been the obvious candidate to replace Carlos Ghosn as interim chairman of the Japanese carmaker after his former boss was charged last week with financial misconduct.

After all, Nissan's partners in the alliance with Renault of France and Mitsubishi Motor of Japan -- a structure crafted by Ghosn over nearly 20 years -- have both promoted their number two executives into interim positions to stabilize a crucial partnership which today ranks as the world's second biggest car producer.

But as Nissan's board gathers on Monday evening to discuss improvements to corporate governance, it is becoming clear that the man chosen by Ghosn to be chief executive of the Japanese carmaker might struggle to win support -- at least from Renault.

Questions are emerging over Saikawa's role as chief executive, after the company was also indicted on a charge of financial misconduct last week and following a scandal earlier this year over faulty vehicle checks.

The board meeting is expected to hand the job of choosing an interim chairman to a governance committee, made up of independent directors and external members.

However on Friday Renault -- which holds 43.4% of Nissan -- demanded that the board call an urgent extraordinary general meeting to discuss "governance and other matters, including the Renault appointees on the Nissan board and in senior management."

Saikawa was once considered one of Ghosn's most loyal lieutenants. However, in orchestrating the internal investigation into Ghosn's alleged underreporting of income and misuse of company funds, he eventually oversaw his boss's downfall. On Nov. 22, the Nissan board unanimously fired Ghosn as chairman.

Saikawa is regarded as"a soft-spoken, serious but also a practical leader" who steadily climbed up the corporate ladder at Nissan over 41 years at Nissan. He had been a supporter of Ghosn's drastic reform effort -- which resulted in thousands of job losses and a relentless drive to improve productivity -- after being named the second in command in 2013.

After joining Nissan in 1977, he was assigned in procurement jobs for many years, which included stints at European operations. He first drew the spotlight in 2001 when Nissan and Renault introduced a joint purchasing program, where he played a central role in launching a team, reducing component costs and implementing intensive steel material purchases.

Describing Saikawa's work attitude as "very strict," a Nissan insider said the 65-year-old executive had a long history of successfully leading tough negotiations with suppliers during his time in the procurement department.

He had a reputation as a level-headed, persistent negotiator, the insider said. Ghosn once declared that Saikawa had his full trust.

It was Saikawa who led Nissan's negotiations with the French government in 2015, when he clinched a promise from French officials not to interfere with management of the carmaker.

He was also charged by Ghosn with leading the discussions with Mitsubishi Motor on the capital tie-up which led to its participation in the global alliance.

Saikawa became president and CEO in 2017, as Ghosn stepped back -- publicly at least -- from day to day management to become just chairman. Since then, he has begun a restructuring of Nissan's North American operations, while also dealing with the crisis of falsified vehicle inspections. 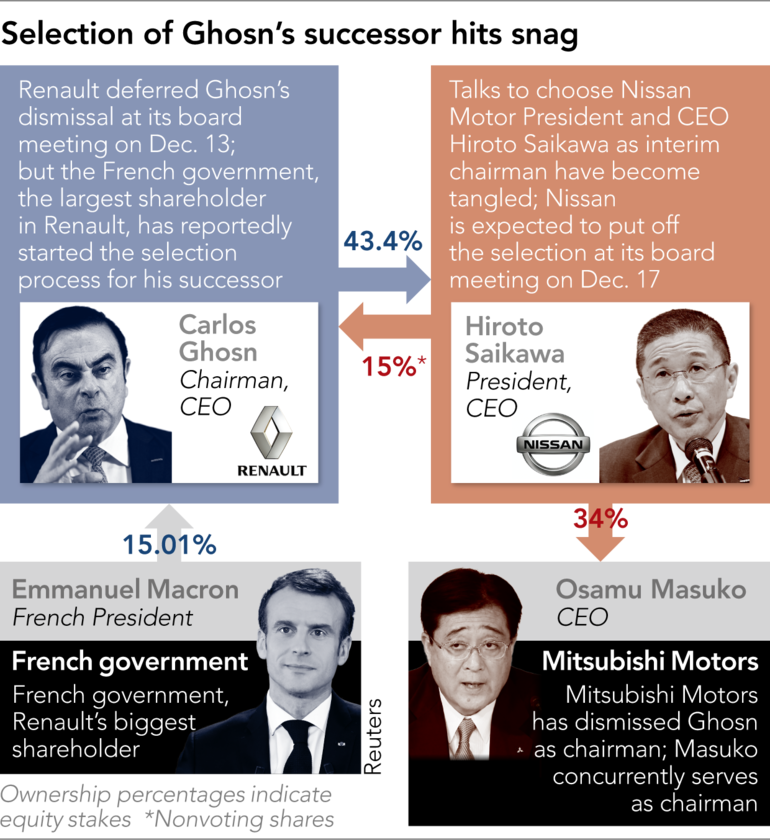 Amid that turmoil, Saikawa was also presiding over the internal investigation into his former boss, after a whistle blower brought alleged misconduct to senior management attention.

Saikawa launched a blistering attack on his former boss the night of Ghosn's arrest, claiming that a secret investigation -- launched after a whistleblower's tipoff -- had found evidence of "significant acts of misconduct." He said the structure which put Ghosn at the head of Nissan and Renault had caused "too much concentration of power."

But critics argue that Saikawa was partly responsible for the failure of governance at Nissan which put so much power into Ghosn's hands. "They kept it unchanged for long time. Saikawa played a very important role as part of the management, despite his criticism of Ghosn [after his arrest]," said Takaki Nakanishi, CEO of the Nakanishi Research Institute.

Meanwhile Renault insists its call for an extraordinary general meeting was not a move against nissan management. "This is not at all an aggressive move, we just want to have an appropriate forum to discuss the alliance after the indictment," said the person close to Renault.