TOKYO -- Carlos Ghosn and his legal team offered a detailed rebuttal of the allegations against him in a court hearing on Tuesday, drawing their battle lines with Tokyo prosecutors.

The ousted Nissan Motor chairman made his first public appearance after three arrests by the prosecution. The hearing at the Tokyo District Court, a process that typically takes around 30 minutes, stretched into two hours.

With the business world watching closely over the fate of the charismatic figure, Ghosn's lawyers had prepared thoroughly for the event, providing 30 pages of English and Japanese material at a briefing afterward -- an amount usually seen only at an actual trial.

Part of the defense strategy is to invite foreign media scrutiny of the case, which has turned a harsh spotlight on Japan's criminal justice system. The prosecution is wary of the length of detention or its interrogation methods being labeled as out of touch with global practices, and of that impression influencing a forthcoming trial.

At the hearing, Ghosn started off his 10-minute statement by denying the accusations against him and stressing his "genuine love and appreciation" for Nissan, before addressing the case being built by prosecutors point by point.

"By stressing that he is not hostile toward Nissan and that he will not flee or hide," Ghosn's lawyers probably hope to secure a speedy release on bail, former Tokyo High Court Judge Hiroshi Kadono said.

In his statement, the auto executive first discussed allegations that his transfer to Nissan of currency swap contracts with Shinsei Bank carrying paper losses of 1.8 billion yen ($16.6 million at current rates) after the 2008 financial crisis constituted breach of trust.

Ghosn stated that the contracts were necessary as a hedge against currency risks because Nissan had refused to pay him in dollars. The transfer was meant as a temporary measure while he gathered collateral and was undertaken under the condition that it "come to no cost to the company," he said, adding that the contracts "were then transferred back to me without Nissan incurring any loss."

The only other option would have been to resign to collect his retirement allowance and use that as collateral, he said.

Prosecutors are examining whether the transaction caused financial harm to Nissan, a necessary condition for breach of trust. Ghosn's attorneys argued that evidence from board meeting minutes and elsewhere indicates that the then-chairman would pay any losses to Nissan before the automaker paid Shinsei Bank.

If Ghosn coordinated with Nissan and the bank, "it's possible that no crime was committed," Kadono said.

Former prosecutor Yoji Ochiai was more skeptical, arguing that "the harm occurred at the moment he transferred the risk to his company." 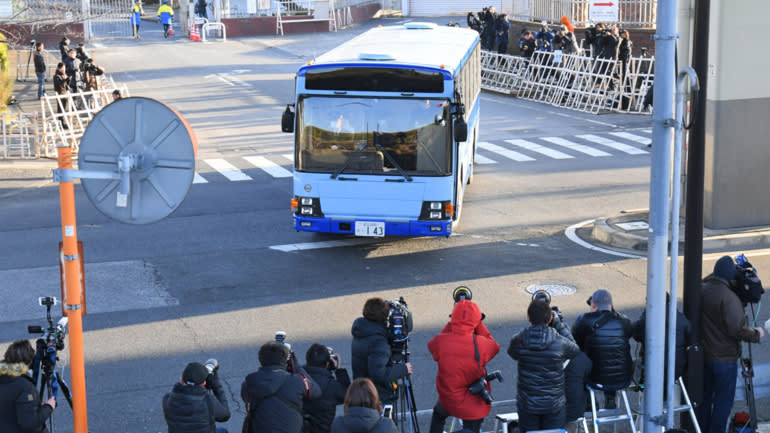 The other component of the breach-of-trust allegations concerns payments totaling $14.7 million from a discretionary Nissan fund to a company run by an acquaintance of Ghosn, Saudi businessman Khaled al-Juffali.

Ghosn asserted that al-Juffali had supported Nissan by strengthening its Middle Eastern distribution network and lobbying the Saudi government on its behalf. "Khaled Juffali Company was appropriately compensated -- an amount disclosed to and approved by the appropriate officers at Nissan -- in exchange for these critical services that substantially benefited Nissan," he said.

Prosecutors would have trouble proving that no such activity took place, Kadono said.

They noted that al-Juffali has not been questioned and criticized the decision to arrest Ghosn without hearing from the other party involved. This move aimed to cast doubt on the basis of the prosecution's claim that the payment was for personal reasons, though whether the defense can secure testimony from al-Juffali to back up this argument remains to be seen.

As for the charge of underreporting compensation that led to Ghosn's initial arrest in November, the former Nissan chief asserted that the documents that prosecutors say show fixed pay -- which legally must be disclosed -- were no more than a personal estimate.

Ghosn stated that he had been courted by four other major automakers while at Nissan, including Ford Motor and General Motors. "I did keep a record of the market compensation for my role, which those companies offered me if I had taken these jobs," he said. "This was an internal benchmark that I kept for my own future reference."

On Tuesday's hearings overall, Kadono called the arguments set out by Ghosn and his team "pretty convincing," adding that they indicate that the prosecution "has a high bar to clear."

Ochiai took a different view, saying "there were no surprises." He predicted that the hearing would have "almost no influence" on the investigation. The defense team's arguments "probably aim to leverage outside pressure," he said.

Going forward, Ghosn's lawyers will be submitting a bail request after his current detention period ends Friday. Prosecutors will decide at that time whether to formally charge him with aggravated breach of trust, the charge on which he was rearrested last month.

Prospects for his release are murky. In cases like this that involve the special investigations unit of the public prosecutors' office, suspects are often kept in custody even after charges are filed, on the grounds that they could destroy evidence. But the Tokyo District Court took the rare step last month of denying prosecutors' request to extend Ghosn's detention.

Prosecutors will work toward wrapping up the investigation into the breach-of-trust allegations while continuing the broader probe into his alleged misconduct. Ochiai indicated that the case should get a substantial boost from testimony by Nissan executives who agreed to plea bargains.

The prosecution "is probably solidifying evidence to undermine Ghosn's claims of innocence," he said.