YOKOHAMA -- Unlike many of its competitors, Nissan Motor failed to mark a record profit in the year ended March. Nevertheless, at its annual shareholders meeting in Yokohama Tuesday, investors were generally positive about the high salary of CEO Carlos Ghosn: 995 million yen ($9.66 million), 7 million yen higher than the previous year, and probably the largest amount awarded to a top executive of a Japanese listed firm. 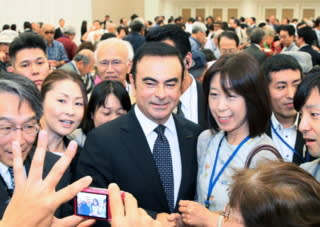 Admirers pose for photos with Carlos Ghosn at a party after the annual shareholders meeting on June 24 in Yokohama.

Ghosn's popularity showed no signs of decline at a party following the shareholders meeting, where a dense crowd of investors flocked around him to take photos. "Remuneration of 1 billion yen is quite common by global standards," a man in his 60's said.  "A competent manager like Ghosn-san would not work for a Japanese firm unless he got a hefty salary," a shareholder in his 70's said.

Only two of the 14 shareholders interviewed said that the compensation paid to Ghosn was too high. Meanwhile, 12 out of the 14 persons said they believed in Ghosn's management ability, suggesting continued confidence in the French-Lebanese-Brazilian businessman.

These people, however, did express some frustrations. The most common sore point was Nissan's weak stock price, which now stands at below 1,000 yen. A shareholder in his 50's said that a reasonable stock price of Nissan should be around 1,500-2,000 yen. "I don't mind Ghosn-san receiving 2 billion yen if he can double the value of the stock," an investor in his 30's said.

Nissan finished at 970 yen on Wednesday, far below the prices of much smaller rivals Mitsubishi Motors and Fuji Heavy Industries, which closed at 1,130 yen and 2,786 yen, respectively.

Many shareholders were more worried about Nissan's future than hopeful. "I am afraid Nissan is taking a big gamble by focusing on electric vehicles, rather than hybrid cars," a 40-something man said.  "It is unclear whether the market for electric cars will take off at all."

"My concern is, Nissan does not have a signature vehicle comparable to Toyota's Prius and Honda's Fit," a man in his 60's said.

A man in his 50's complained that Nissan is focusing too much on emerging markets. "Even though the number of foreign investors (in Nissan) has increased, many shareholders are still Japanese," he said. "Unless the company can create an image in Japan that its cars are selling as strongly as Toyota's Aqua and Honda's Fit, its stock price will not rise."

He may have a point. Ghosn's policy of focusing on emerging markets as a way of improving earnings is perhaps right as a manager. But a company's stock price is also affected by what investors think of it.