Not all is rosy around Taipei

TAIPEI -- Some Taiwanese electronics component makers, including MediaTek and Largan, are thriving amid Samsung's recent travails in its mobile business, but not all are enjoying an upswing. 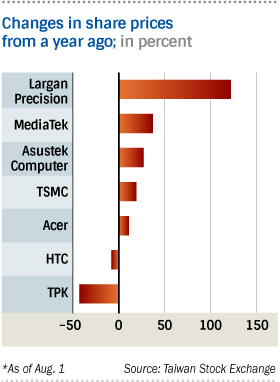 Information Technology companies with their own brands to defend, such as HTC, Acer and Asustek, are struggling to turn things around. Even some contract manufacturers are having a rough time.

Although HTC has managed to cut its sales and marketing expenses, returning to profitability in the second quarter following its first net loss in the January-March period, it is still forecasting its 12th straight year-on-year sales decline in the third quarter ending in September.

Kylie Huang, an analyst with Daiwa-Cathay Capital Markets, said stubborn problems at HTC, including a poor yield rate -- the proportion of properly functioning devices out of the total produced -- and insufficient supply, thwarted its rebound last year, when Apple was faltering a bit. The company continues to muddle along this year. "HTC still will not be able to compete with Apple's iPhone 6 and Samsung's strong marketing capabilities in the second half of this year," Huang said. "This is still not going to be a good year for them."

Acer and Asustek, which are trying to refocus on mobile devices after a long drought in the notebook market, are encountering similar difficulties. Acer's revenue slid again in the first six months of the year, while Asustek's sales were flat.

"It is not going to be easy for traditional Taiwanese notebook manufacturers to make it in the mobile sector," Huang said. Given the time it takes to ramp up production, "it could be that they will want to abandon their efforts if they feel they cannot make money from mobile devices."

The problems extend to component makers as well, despite the strong runs MediaTek and Largan are having. The most notable may be touch panel maker TPK. Its second-quarter profit dropped 90% from a year earlier, and its shares have plummeted 50% over the past year as it loses out to Chinese competitor O-Film in the mainland market due to fierce price competition.

"Apple suppliers like TPK and backlight maker Radiant are not benefiting from the U.S. company's gain, because they provide parts for slumping iPads, but not the upcoming iPhone 6," Jeff Pu, an analyst with Yuanta Securities, said.

Even MediaTek may have something to worry about: specifically, whether it can meet China's growing demand for 4G, or fourth-generation phones in the second half of this year, given that it lags Qualcomm in technology. "So far Chinese smartphone companies seem to react better to Qualcomm's 4G chips," Pu said. "Whether MediaTek can deal with the pricing pressure and provide enough quantity for clients later this year remain to be seen."

Even for Taiwan Semiconductor Manufacturing Co., the world's No. 1 contract chipmaker, it is not all smooth sailing. The company is facing pressure from a more aggressive Samsung. TSMC's shares closed at 120 New Taiwan dollars on Aug. 1, shedding about 8% since Chairman Morris Chang said at an investor conference in mid-July that the company will lose some orders to its South Korean competitor next year.

Carlos Peng, an analyst at Fubon, a Taiwanese financial services company, said TSMC's setback is temporary and reflects the two companies' differing strategies rather than a technological gap. "Samsung is so aggressive that it is even willing to incur losses to secure a bigger chip market share," Peng said. "It is starting to mass produce 14- and 16-nanometer (chips) even though its yield rate is still only 30-40%, lower than TSMC's current 50%."