DUBAI -- Iranian airlines, eager to rejuvenate their fleets, can hardly wait for the West's economic sanctions to be lifted. America's Boeing and Europe's Airbus are already making moves to capture this windfall.

The U.S., the European Union and others leveled tough economic sanctions against Iran for years over the country's refusal to abandon its nuclear ambitions. In addition to restricting the country's oil exports and shutting it out of the global banking network, the West also imposed limits on its procurement of aircraft. 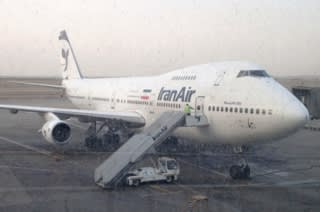 Iran Air has had to make do with an aging fleet, including the Boeing 747-200 photographed here at Tehran Imam Khomeini International Airport in Tehran, due to years of crippling economic sanctions.

As a result, Iran is still relying on old airplanes, such as Boeing 747-200s and Airbus A300s. According to Reuters, the average passenger aircraft used in the country is 23 years old. The August 2014 crash of a small passenger plane, which claimed almost 40 lives, is still fresh in the memory of Iran's flying public.

The nuclear deal Iran reached with the U.S. and five other countries on July 14 could change Iran's civil aviation industry, as the West has agreed to lift sanctions in exchange for Iran limiting its nuclear development program.

The sanctions will not be removed until Iran's compliance with the agreement is verified. Yet this has not stopped Boeing from beginning feasibility studies. Airbus was already a step ahead, since its representatives were part of the French business mission that visited Iran months before the deal was struck. Enthusiasm among aircraft makers is hardly surprising, given the scale of potential orders involved.

The Iranian government has said the country needs to buy 400-500 passenger planes worth $20 billion over the next 10 years. On Saturday, a state-run TV station aired a revelation by Transportation Minister Abbas Akhoundi that Tehran was considering comprehensive aircraft update plans for Iran Air and Iran Aseman Airlines.

It is not just the large aircraft manufacturers that will likely see a boost in business. Because the country is large, strong demand for small passenger jets is also expected. This presents tantalizing opportunities for companies such as Canada's Bombardier.

With a population of roughly 78 million, Iran's importance to the airline industry is second only to Egypt in the Middle East. Because the country has been hurt by the economic sanctions, its air travel demand has been filled by carriers based in neighboring countries, such as the United Arab Emirates and Qatar.

The UAE's Emirates and Etihad Airways have flights serving the Iranian capital, Tehran, while Qatar Airways operates from Tehran as well as the northeastern city of Mashhad, and Shiraz in the south. The UAE's discount airlines also offer connections to various Iranian cities.

Iranian airlines also fly to Dubai and other destinations, but they are no match for foreign rivals in terms of the frequency of flights and aircraft. The lack of competition is apparent in Emirates' airfare for the Dubai-Tehran route. Although that service flies half the distance of the Dubai-Istanbul route, Emirates charges more for flights to Tehran. This shows the company has set a big margin for the route simply because it can.

The coming changes will mean more competition for major airlines in the Persian Gulf region, according to Addison Schonland at AirInsight, a U.S. commercial aviation consultancy. Once the sanctions are lifted and Iranians have more opportunities to use their own country's airlines, transit passenger demand out of Iran at Dubai and other Middle East locations will likely drop, Schonland said in an article published in a UAE newspaper.

Challenges for Iran remain, though. The three major Persian Gulf carriers already have established extensive networks, covering Europe, Asia and North America, and it will take time for Iranian airlines to catch up. And it is unclear how smoothly Iran will be able to raise funds to buy new aircraft.

Air travelers in and out of Iran will increase sharply in the long run, with Iranians having more travel options, and tourists wanting to visit the country's many historic sites. Sooner or later, Iranian airlines will become a player in Middle Eastern skies, as long as the nuclear deal stands.