Allowance for bad assets increase 49% from a year ago 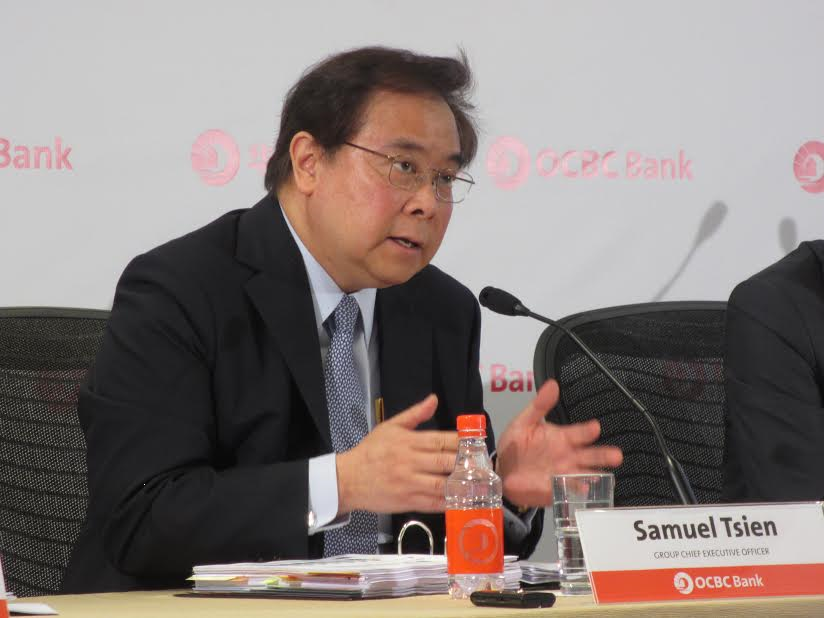 SINGAPORE -- Oversea-Chinese Banking Corp. announced Tuesday an 11% fall in its full-year net profit for 2016 to 3.47 billion Singapore dollars ($2.44 billion) from the previous year, in part due to higher allowance booked for bad loans to the beleaguered oil and gas industry.

The worse-than-expected performance drove OCBC's share price down by 3.3% to S$9.43.

Total allowance for loans and other assets were S$726 million in 2016, up 49% from a year ago. An increase in specific provisions booked for corporate accounts in the oil and gas support services sector was the main cause. Nonperforming loans grew 41% on the year, while its NPL ratio rose to 1.3% from 0.9% a year ago.

"I am not able to say now that the stress on oil and gas sector has ended," said OCBC Chief Executive Samuel Tsien at the press conference on Tuesday. Although the crude oil price has risen to above $55 per barrel, Tsien said that from a lender's perspective, that price has to increase to at least $60 on a sustainable basis before the charterers enter medium and long-term contracts. "For the [off-shore] operators to be able to earn a margin they require for the operation, we think the oil price should be above $70," Tsien added.

Meanwhile, net profit contribution from OCBC's Hong Kong arm OCBC Wing Hang grew 2.6% from a year ago. "Wing Hang has performed as we expected and we were able to derive group synergies on generation of deposits, treasury products as well as referrals to other parts of OCBC's business," Tsien said. The company's Indonesian business also performed well, with net profit contribution expanding 17.8% on the year.

Shares of the three Singaporean banks -- DBS Group Holdings, United Overseas Bank and OCBC -- have been rallying on hopes that expected rate hikes in the U.S. will translate into a rise in Singapore's interest rate and expand the banks' net interest income.

However, Tsien was less optimistic. "On the loan yield book, we expect it will be pretty flat," he said. "I do not believe we will be able to see an increase in credit spreads primarily because the loan demand continues to be fairly weak."

UBS analyst Aakash Rawat in a recent report expressed skepticism about a meaningful improvement in net interest margin and income for local banks as Singapore's domestic interest rates are less sensitive to U.S. rate movements now than in the past. "The resulting pressure on asset quality is likely to create a bigger headache for the banks," Rawat noted.

Shares of DBS and UOB fell 3.4% and 1.6% respectively on Tuesday as OCBC's results reignited concerns over Singaporean banks' asset quality. DBS and UOB are expected to release its financial results for 2016 on Thursday and Friday respectively.