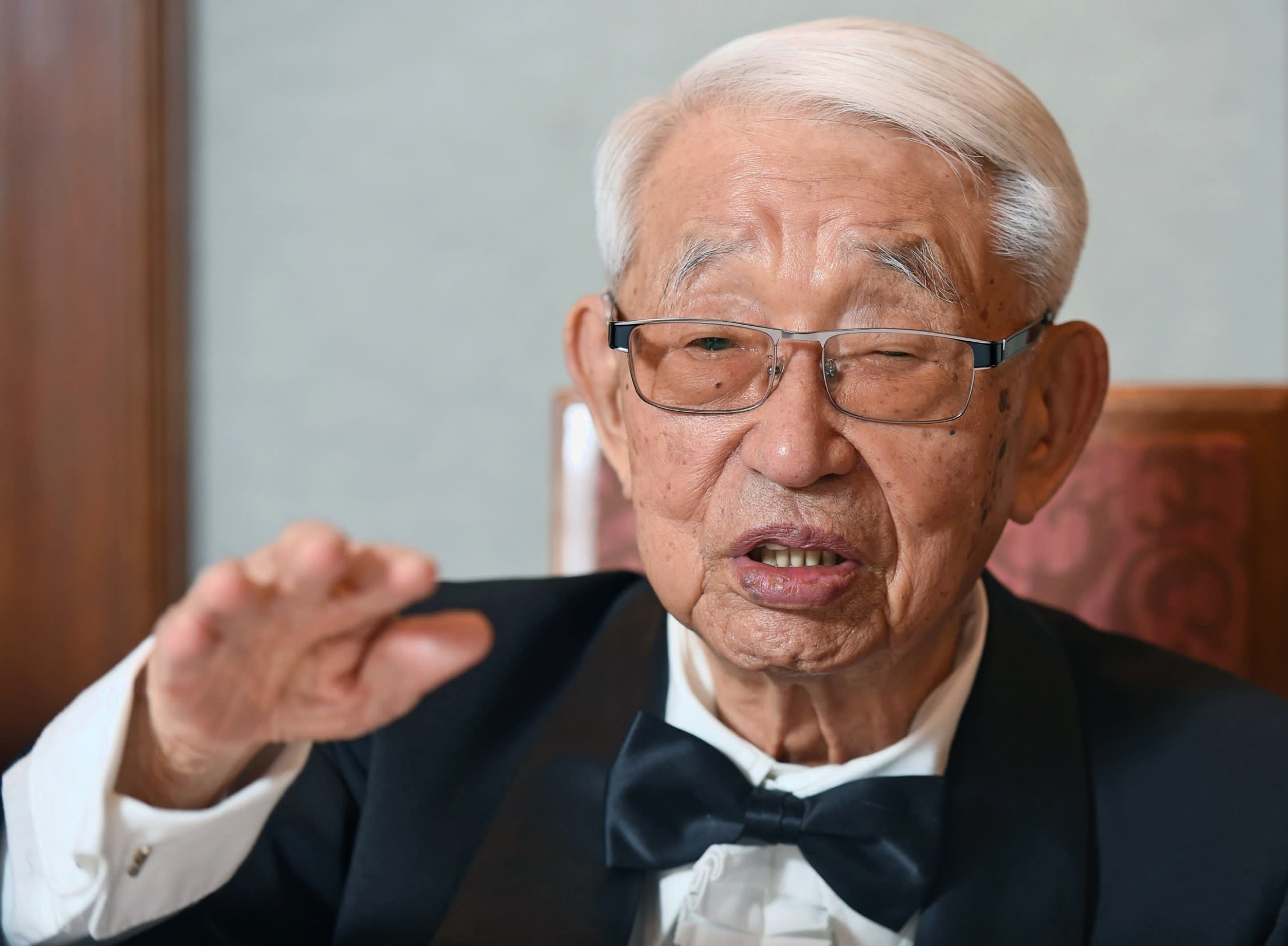 TOKYO Tadashi Sasaki, Sharp's inspirational former vice president who turned the company into a global electronics powerhouse, died on Jan. 31. He was 102.

Sasaki, also known as "Rocket Sasaki," was a shrewd business leader who believed in co-creation, a philosophy that was evident in his close mentoring of entrepreneurial luminaries such as Apple's Steve Jobs and Masayoshi Son, chairman and CEO of SoftBank Group.

"Sasaki-sensei supported me before I founded SoftBank and all through my ups and downs, even when I was sick and the company in a downturn. I owe everything to him," Son said in a Feb. 7 press conference for the company's financial results, which recorded an all-time high in net profit for the first nine months of its fiscal year ending in March.

Such success shows that Son was not exaggerating. He might not have become who he is today if he had not met Sasaki.

In August 1978, Son had temporarily returned to Japan from the University of California, Berkeley, to sell an electronic translator with phonetic functions, a device he had developed with some Berkeley professors.

This was Son's first entrepreneurial foray. Born and raised into poverty in an obscure town on the southern Japanese island of Kyushu, the third-generation ethnic Korean was eager to move up in the world.

After numerous rejections, Son found himself in a telephone booth during that sweltering summer, pinning his last hopes on a call to Sharp. He managed to wrangle a meeting with Sasaki, before whom he carefully unwrapped his translator. The meeting led to a licensing contract with Sharp. "This was the first time I ever made money through my own venture, and it was all thanks to Sasaki-san," Son recalled. 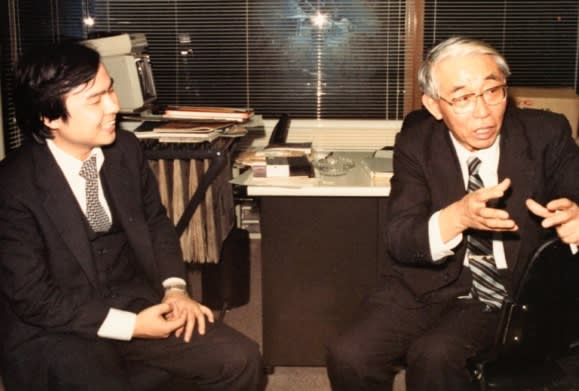 Tadashi Sasaki, right, with a young Masayoshi Son. The former Sharp vice president continued to mentor and support Son after the founding of SoftBank Corp. Japan in 1981.

Interviewed nearly 40 years later, Sasaki said he was still struck by Son's intense eyes. "I thought this young man was somehow different [from others], and I wanted to help him," he recalled. "Sasaki-san never failed to invite me to dinner when he visited the U.S. every few months," Son said.

Sasaki decided to fund Son with up to 160 million yen ($1.47 million at current rates) for research. After graduating from Berkeley, Son returned to Japan and used the money to found SoftBank Corp. Japan in 1981.

Sasaki continued to mentor and support Son. When SoftBank ran into financial difficulties soon after its establishment, Sasaki used his clout to help Son secure a loan, calling a bank director and personally vouching for his young protege.

"My wife gave me a good dressing-down, because I offered my retirement money and house as collateral if needed," Sasaki said.

When asked why he had done so much for Son, he simply said, "I just liked him." Son remains touched by Sasaki's kindness and generosity. "Sasaki-sensei was my savior, like my Buddha, because he believed in my future and supported me although I offered nothing in return," he said.

Son's gratitude toward Sasaki is embedded in SoftBank's corporate principles. Instead of celebrating the day of the company's establishment, Son has set up an annual "Thank-the-Mentors Day" that is dedicated to honoring the early supporters of the company, including Sasaki. "He had the kindness to guide me even though he was not related to me nor had financial interests in SoftBank. I cannot thank him enough," Son said.

Sasaki was born in Hamada, Shimane Prefecture, in 1915 and moved to Taiwan when he was still young. After graduating from Kyoto Imperial University, Sasaki started to work at a vacuum tube plant but was later recruited into the military.

He went to Germany to study radar technology, barely managing to return to Japan on a German U-boat with a copy of a radar blueprint. The Japanese major carrying the original was not as lucky: The U-boat carrying him was sunk off Singapore, killing him and destroying the blueprint.

After the war, Sasaki threw himself into his studies and began to believe that the future of electronics was in transistors. The prescient Sasaki impressed the heads of Hayakawa Electric Industry -- forerunner of Sharp -- who asked him to join the company.

Sasaki later headed a team of Sharp engineers in the company's "calculator war" against domestic rival Casio Computer. Now merely a smartphone function, calculators then were drivers of the electric appliance industry. Competition in the palm-size calculator market led to major advances in semiconductor technologies, which found their ways into TVs and other home appliances. Sasaki's business card, with the famous “Rocket Sasaki” illustration on the back

This competition paved the way for Japan's rise as the global leader in electronics.

Impressed by Sasaki's work, executives of American manufacturing conglomerate Rockwell presented him with a drawing of himself straddling a rocket christened "Sharp" with "Rocket Sasaki" written below.

Dr. Sasaki, as he was called by close associates, recalled the unexpected meeting with Jobs, who had visited Sharp after being ousted from Apple. Sasaki's secretary described Jobs as "a strange foreigner" wanting to see him.

"He looked slovenly but the power of his eyes was awesome, like Son's," Sasaki recalled, referring to the long-haired Jobs, who had shown up dressed in a T-shirt, jeans and sandals. "His eyes were gleaming."

Sasaki explained his philosophy of co-creation, and Jobs told Sasaki he had come to him for ideas on his next venture, the then-nascent iPhone, which went on to change the world.

Jobs and Son later crossed paths following an introduction by Larry Ellison, co-founder of Oracle. The two hit it off, with Son later obtaining exclusive rights to the iPhone in Japan after acquiring the Japanese unit of British mobile phone operator Vodafone Group. With the iPhone in his pocket and a mobile network in hand, Son went on to challenge Japan's mobile phone giant NTT Docomo.

Sasaki spent his latter years at an elder care facility in Tsukaguchi, Hyogo Prefecture, a town between Osaka and Kobe. Even at the age of 101, when interviewed for a story, Rocket Sasaki was still closely following technological innovations.

And he remained proud of his former protege Masayoshi Son. "This is interesting, isn't it?" he asked, holding up a magazine cover adorned with Son's photo. "It looks like Son will continue his fight. He hasn't changed a bit."