TOKYO -- Japan is at the forefront of Asia's aging curve, but it is hardly the only nation going gray. Over the next 30 years or so, the ratio of citizens aged 65 and older is expected to reach around 20% in a number of Southeast Asian countries, according to the United Nations. This is a major societal issue; it is also a potential source of business opportunities.

Takahisa Takahara, president and CEO of Unicharm, recently spoke with The Nikkei about how the Japanese sanitary goods producer plans to cultivate other Asian markets with expertise honed at home.

Q: What is your take on aging in Asia?

A: Many Asian countries now have birthrates as low as Japan's. So from here on, populations in those countries will age faster. 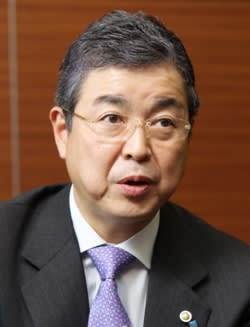 Also, public awareness about nursing care for the elderly is low in the region. In China and Thailand, people tend to spend little money on products and services for seniors. The situation is very similar to that seen in Japan during the 1960s and 1970s.

Q: As Japanese companies explore other Asian markets for adult diapers and nursing care, what are the keys to success?

A: Simply offering Japanese-style nursing care services and disposable diapers in the rest of Asia won't cut it, because priorities differ from market to market. It is important to articulate the positive economic effects of reducing the number of bedridden seniors, and the role disposable diapers can play.

Across Asia, there are still only limited numbers of wealthy people who buy Japanese products. It is important to change values by spreading information over the Internet and other means.

A: Unicharm sells disposable adult diapers in 13 foreign countries and regions. In the case of diaper pants, we emphasize that they are easier for caregivers to change than diapers that are taped at the sides, since the switch can be made while standing up.

Yet in some countries, diaper pants don't sell well. People take it for granted that diapers can be changed with care receivers lying down.

It is thus necessary to drop the notion that products that are popular in Japan will also sell in the rest of Asia. The key is to develop products after identifying specific local needs.

Q: Do you plan to expand your senior-related segment, drawing on your know-how in the adult diaper business?

A: We are not considering directly engaging in liquid food and nursing care services. Today, products don't sell unless they have overwhelmingly higher value than those of competitors. We want to maximize the value of our disposable diapers, a field in which we already have an edge.

On the other hand, we want to actively cooperate with other companies on products and services for seniors. We have teamed up with apparel and textile makers to design clothes and disposable diapers by sharing data on seniors' physiques.

We will also work with retailers to design better sales floors. By presenting shoppers with a variety of products for seniors, we aim to trigger new demand.