Android Auto drew strong attention at this year's Google I/O, an annual software developer-focused conference held in June. The platform extends the use of Google's Android operating system to automobiles. It functions by connecting users' smartphones to compatible cars, allowing them to work together.

When drivers tell the system where they want to go, it displays up-to-date information, such as maps and local landmarks. The use of voice recognition and the connection with smartphones means drivers can use the Internet from behind the wheel.

Android has about an 80% share of the smartphone operating system market. Apple's iOS controls around 15%. With its overwhelming smartphone presence, Google is targeting automobiles.

About a year ago, Apple announced "iOS in the car," which connects devices such as iPhones and iPads to vehicles via cable. Apple later introduced a standard called CarPlay, which allows drivers to use apps on the car's built-in displays, at an auto show in Geneva.

These advances mean there is the potential for market disruption. Today's automobiles consist of four basic modules:

> Engines, motor and other driving devices;

> Basic chassis such as auto body and frame;

These technologies will be developed under the leadership of automakers. Telematics, which uses information technology to improve safety and provide services, is a fifth module. Development in this field is a different story.

At an early July meeting in the U.S., Google co-founders Larry Page and Sergey Brin partially revealed company plans to develop a completely new type of vehicle. It has neither a steering wheel nor brakes, and is convenient for car-sharing.

Google's driverless car is a threat to automakers, which see steering as central to the driving experience. Still, serious technological and cost difficulties stand in the way of the transition to cars like Google's. Laws also need to be changed before self-driving vehicles can hit the roads. There is a long way to go.

Telematics, including map data, in traditional cars, is a step in the self-driving direction. More than a century after the Ford Model T debuted, the auto industry now appears at a turning point. Great leadership changes may occur as a result of disruptions from companies not traditionally associated with automaking, such as Google and Apple.

Automobiles were indispensable to the previous generations, who were raised during motorization's big wave. Not any more. Today's youth are less concerned about cars. Calls for mass transit systems and car-sharing programs, for example, have grown as the status surrounding vehicles diminishes. Youths today often view cars as a simple means for getting from A to B. The idea of cars as a public, rather than private, commodity may go mainstream.

Automakers have to address these issues at the same time as they battle new, cheap competition from companies in China and other emerging economies.

A nightmare scenario for automakers is that modularization allows anybody anywhere to make cars. This would lead to their commoditization. One possible way to counter the trend is to promote models as fun to drive. Wristwatches have survived in part through such marketing.

There is another option: Working with Google and Apple could bring new customers to automakers. Young people, familiar with smartphones, may become interested in cars if the IT inside them is to their liking.

New automakers such as Tesla Motors of the U.S. are far ahead of conventional carmakers in this field. Tesla dashboards are huge tablet screens, made in cooperation with Nvidia of the U.S., the world's largest maker of graphics processing chips.

Drivemode, a Silicon Valley startup run by Japanese and American youths, is set to accelerate the trend toward new vehicles. The company plans to connect Android-based tablets to existing cars through easy-to-use interfaces, making it possible to convert all vehicles into "smart cars."

Existing major automakers seem unprepared for challenges from other sectors. A failure to keep up with the in-car IT revolution will have grave consequences. 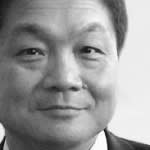 Ken Kutaragi, known as "the father of PlayStation," is president of Cyber Ai Entertainment. After joining Sony in 1975, he became Sony Computer Entertainment president, Sony executive deputy president and director and SCE honorary chairman, and now serves on the boards of numerous companies. He is a regular contributor to INNOVASIAN, our column by tech visionaries.