One-time flophouses fit the bill for budget travelers in Japan TOKYO -- As room rates continue to rise, some Tokyo hotels are coming up with novel ways to accommodate foreign visitors.

Nadeshiko Hotel in the capital's trendy Shibuya district offers female guests the chance to experience a capsule hotel. These typically have a common area, a communal bath and rows of tiny, enclosed sleeping spaces that are little more than a bed with a small TV built into its foot.

"We wanted to overturn the idea that capsule hotels are only for men," said Sayaka Shimizu, public relations manager for Usen, which opened the hotel. The leisure services company is best known for its subscription music service.

Guests at the Nadeshiko are provided with traditional summer yukata robes to wear around hotel. They can also enjoy the communal bath while gazing at an artist's rendering of Mount Fuji.

Other elements adapted to foreign tastes include a lounge for guests to mingle in and the relatively spacious capsules themselves, along with English-speaking staff.

Rooms on the cheap

Nadeshiko Hotel is popular with Japanese women, too. "At the weekend, almost all [the guests] are Japanese,' said Shimizu. While prices, which start at 7,700 a night, are higher than those for the typical capsule hotel, the occupancy rate is high, at around 70%, she said.

In recent years, many budget travelers in Tokyo have made their way to an area south of Minami-Senju Station. This working-class district, formerly known as Sanya, accommodated many day laborers -- men who toiled to build modern Tokyo during the postwar boom.

Starting around 2002, some of the flophouses began converting to hostels. That year, Japan hosted the World Cup, putting a squeeze on Tokyo's hotels. In 2009, Fumio Kosuge opened Kangaroo Hotel. His family ran an inn in Sanya for decades; the sparse, modern concrete design of the new hotel was unlike anything the area had seen before. 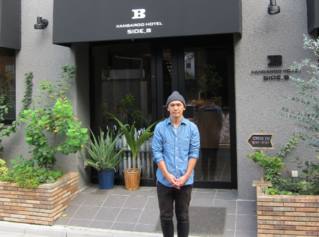 "The hotel wasn't originally intended just for foreign people, but for everybody -- like young people and students -- who wanted to stay somewhere affordable," Kosuge said.

Foreign tourists, unlike Japanese, have no negative perceptions of the area. On the contrary, they are attracted by the affordable rooms, which start at 3,600 yen ($35) a night for a single. Tourists now make up 80% of the guests.

In January Kosuge opened an annex across the road, on the site of his grandparents' original inn. "My hope is that this hotel will spur people from many countries to come ... to this neighborhood," he said.

"I don't think people realize that is a really interesting area," said Howard Billington, 31, who has been staying in Sanya.

He has been visiting the local bars and restaurants. "If you're adventurous to walk through the door, then I think you get the traditional element ... they're usually very welcoming," he said.

"It's nice to see more of the real Japan," agrees visitor Mikey Bartrum, 33. "I prefer [seeing] the locals to the tourists."

Japan could see 20 million overseas visitors this year, but the stronger yen is squeezing wallets. Spending by foreign tourists in the three months to September fell, year-on-year, for the first time in 19 quarters, according to figures from the Japan Tourism Agency.

The yen's rise hits sales of items that visitors can buy back home, but Japanese medicines and toiletries that are only sold domestically remain popular. "It's becoming extremely important to have visitors buy products that are exclusive to Japan," Akihiko Tamura, commissioner of the Japan Tourism Agency, told reporters.

Meeting the needs of visitors can revitalize the market more broadly, he said. "In that sense we are entering an interesting period."