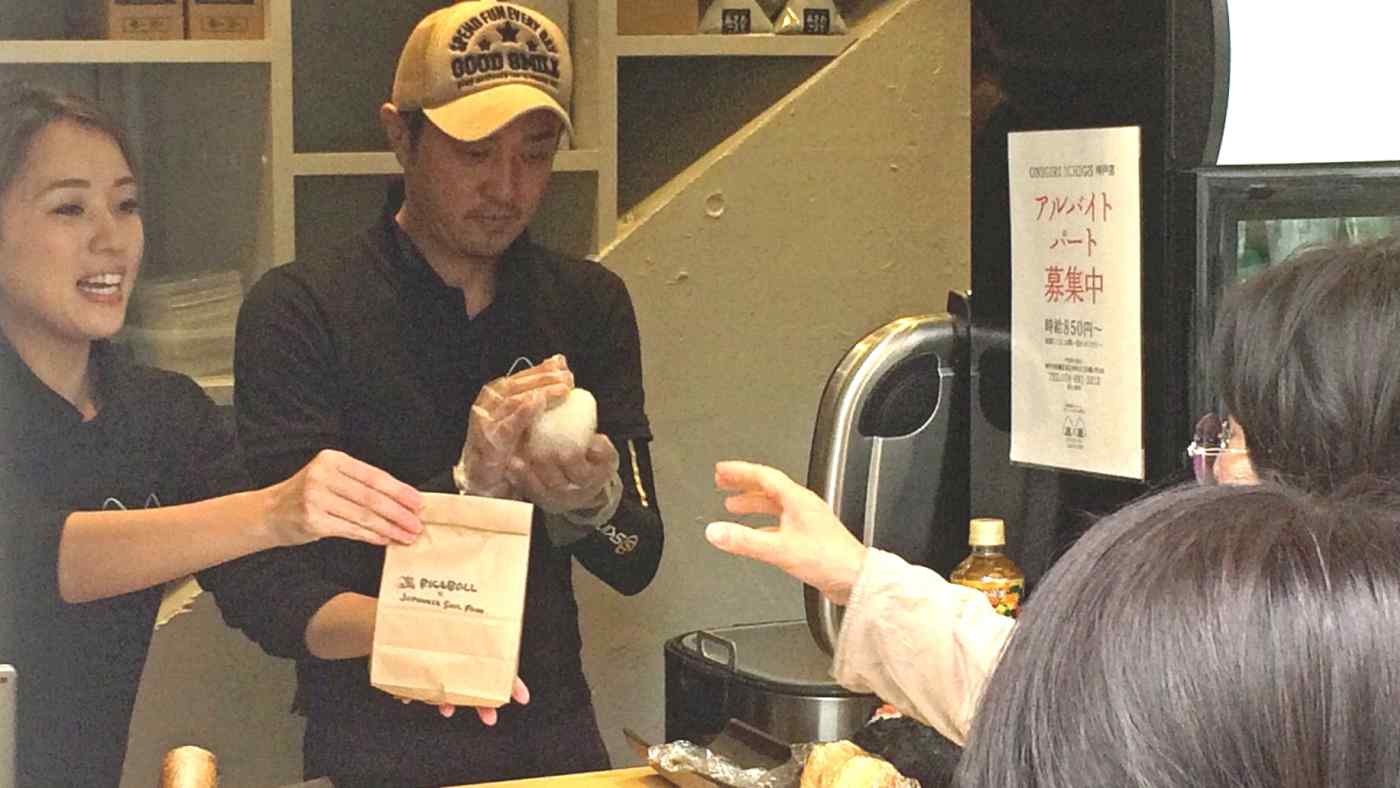 TOKYO -- Specialty shops that sell "onigiri" rice balls in Japan are adding a new twist to the staple Japanese food that makes for a quick and easy snack, luring in women and youngsters amid falling domestic rice consumption.

Those efforts include promoting rice produced by a shop's operator and increasing the visual appeal of the food with a variety of toppings and fillings. The number of the new types of onigiri shops in the country is rising.

Among them is Onigiri Ichigo, a sleek-looking takeaway store that opened on Nov. 21 near Hanshin Electric Railway's Fukae Station in Kobe.

Although the area is usually not busy, the store attracts a constant stream of customers.

The Kobe store is the second outlet after the company opened in September the first one in Tokyo's Daikanyama district.

"We sell at least 500 to 600 rice balls a day," said Takayuki Suzuki, the company's president, in an acknowledgement of the popularity of the Kobe shop.

About 10 kinds of onigiri are on offer, including "shio-musubi" (salted onigiri) and "kombu" (kelp), which are priced at 100 yen (88 cents) and 150 yen, respectively, including tax. They are made fresh after each order is received.

Onigiri displayed in a showcase at "onigiri stand Gyu!" opened at shopping complex Laforet Harajuku in Tokyo's Shibuya Ward at the end of September look like cupcakes. They sell for around 300 yen apiece, and some of the more unconventional ingredients include foie gras and roast beef.

"We want to broaden the possibilities of onigiri," said an official of Tokyo Onigiri Labo in Tokyo, which operates the shop.

Another shop, Onigily, which opened its doors two years ago near Tokyu Naka-meguro Station in Tokyo, has an atmosphere like a cafe. The store, which targets young women, is also a hit among mothers accompanying their children.

These new onigiri shops envision not only creating a new demand in Japan but attracting foreign visitors to Japan as well. They are also considering opening overseas outlets.

More than 20% of the visitors to onigiri stand Gyu! are foreigners. The operator plans to open an outlet in Dubai and is now in talks with local officials concerned.

A U.S. outlet is under consideration for Onigily, too.

Although the Ministry of Agriculture, Forestry and Fisheries is pushing for the expansion of Japanese food abroad, the ministry does not seem to actively encourage such a move for onigiri.

According to the ministry, the domestic consumption of rice for food continues to decline by several tens of thousands of tons per year.

It looks like Onigiri may be carving out a new market for Japanese rice.