Online retailer JD.com steps on the gas in its pursuit of Alibaba

BEIJING -- China's massive e-commerce market is growing more crowded by the day, but only one player has industry leader Alibaba Group Holding looking over its shoulder: the recently ascendent JD.com.

The No. 2 e-retailer is growing much faster than its larger rival. In 2015, JD.com's gross merchandise volume, the total value of goods and services sold through its online services, jumped 78% over the previous year, compared to the 30% growth logged by Alibaba's business-to-consumer operations. Alibaba still dwarfs JD.com in terms of scale, with a GMV of 2.95 trillion yuan ($460 billion) for the period, compared to JD.com's 462 billion yuan. But the latter's growth for the year "outperformed [even our management's own] expectations," said Sidney Huang, JD.com's chief financial officer, in March. 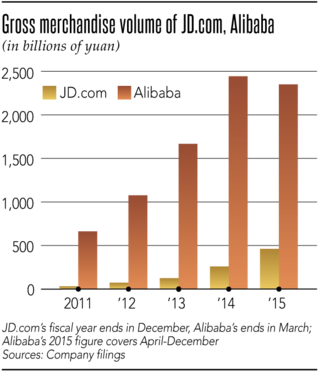 The stock market seems to be impressed by JD.com's growth, as well, despite the fact that its bottom line remains in the red.

The company's net loss in 2015 nearly doubled from the previous year, to 9.3 billion yuan. Since its debut on the Nasdaq Stock Market in May 2014, it has not recorded a profitable year or even quarter. This has some investors drawing comparisons to U.S. e-commerce giant Amazon.com in its early days.

Compared to its closing price at the end of 2014, JD.com's stock has recently been trading slightly higher, outperforming Alibaba, which is down more than 20%. On the stock market, at least, JD.com is becoming recognized as Alibaba's top contender for China's e-commerce crown.

One advantage JD.com may have over Alibaba is its business model. JD.com itself operates as a retailer, procuring goods from manufacturers and vendors and holding them as inventory in its own warehouses, much like Amazon does.

Alibaba, on the other hand, provides an online marketplace where merchants sell directly to customers. Its revenue comes from "rent" and commissions paid by the sellers.

As Amazon's track record shows, the retailing model makes it easier to provide both higher-quality service and lower prices for shoppers. 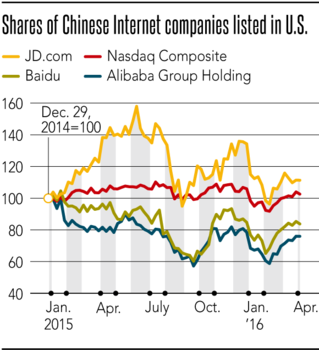 Furthermore, JD.com's management has jumped on every chance to develop alliances that will help it close in on Alibaba. Its main partner is another Chinese Internet giant: Tencent Holdings.

In March 2014, shortly before JD.com's initial public offering, Tencent agreed to buy a total 20% stake in JD.com in a series of new-share private placements, including one at the price to be set for the IPO, scheduled for that May. The IPO ended up being priced at $19, and JD.com raised roughly $1.8 billion in the public offering. Tencent paid a total of some $1.5 billion in those private placements.

By joining the Tencent team, JD.com gained access to China's two biggest messaging apps, WeChat and QQ, both run by Tencent. This development was seen as a game changer in the country's e-commerce landscape.

WeChat currently has roughly 700 million monthly active users, according to Tencent, about 85% of whom live in China. This gives WeChat a user base that is roughly half the size of China's entire population.

China's broader Internet industry is dominated by three giants, Baidu, Alibaba and Tencent. Each with its own realm -- Baidu holds the commanding market share in online searches, Alibaba in e-commerce and Tencent in social media -- but they are increasingly intruding on each other's strongholds.

The recent global trend of integrating social networks and e-commerce services pushed Tencent to expand its operations in the online shopping arena. Hence the partnership with JD.com, which was designed to spur shopping via WeChat and QQ.

In October 2015, the two companies jointly launched the "Brand-Commerce" marketing platform. The platform provides consumer goods makers and other marketers with integrated data collected on WeChat, QQ and JD.com. 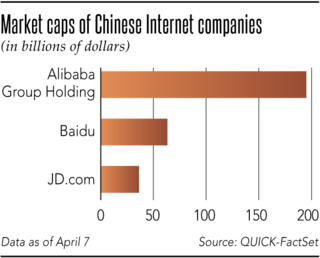 JD.com's alliance-building efforts are not limited to within China. The company announced on April 6 that it had formed a partnership with Japanese parcel delivery giant Yamato Holdings, which has accumulated e-commerce delivery experience by working with Amazon's local arm and other Japanese online retailers. The partnership aims to deliver products from Japanese retailers and manufacturers to the doorsteps of Chinese consumers in as little as four days -- half the average time it currently takes -- at lower costs.

As a pioneer in private-sector parcel delivery, Yamato has established itself as Japan's biggest player in that field, with an annual delivery volume of more than 1.7 billion parcels in the year through March 2016.

The new arrangement is intended to tap increasing demand for Japanese products among Chinese consumers. Last year, consumer goods orders shipped from Japan to China came to an estimated 800 billion yen ($7.42 billion), and they are expected to expand to 1.4 trillion yen in 2018, according to Nikkei reports. The tie-up with Yamato follows on the heels of an earlier move also aimed at satisfying China's hunger for Japanese products. In late March, JD.com announced a partnership with Japan's Kao, a toiletries and cosmetics giant, in which Kao is to open its flagship online store on JD.com's platform. Kao's products are popular souvenir items among Chinese tourists to Japan, who often buy them for their relatives and friends back home.

For JD.com founder and chief executive Liu Qiangdong, also known as Richard Liu, ties with Japan go back to the early days of his career. After graduating from Renmin University in Beijing in 1996, Liu worked for Japan Life, a health products company, for two years. During that time, Liu said, he learned about corporate management and financial systems and procedures. Yamato was already a well-established parcel deliverer at that time.

When Liu joined Japan Life, he already had experience as an entrepreneur.

The son of a cargo-ship owner, Liu grew up in a small city in Jiangsu Province. At the age of 18, he decided to leave his hometown for Beijing to study sociology at Renmin University. Realizing that sociology would not get him far in finding a good job, he taught himself computer programming and started to earn some money with programming jobs, according to media reports. 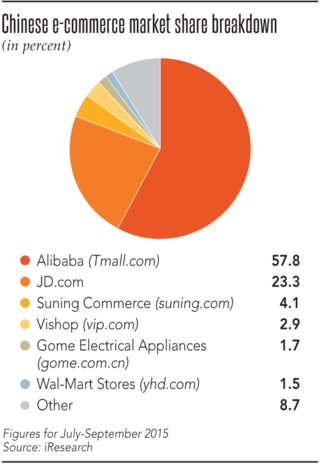 While still an undergraduate student, he invested the money he earned from programming into a restaurant in Beijing, but it went bankrupt within just a few months. The problem was not that his restaurants didn't have enough customers, according to Liu, but that the money was embezzled by staff.

The young Liu ended up not only losing his first restaurant, he was also left with debt to repay. That painful failure taught him the importance of management organization and following proper financial procedures, Liu told the media in later years.

When he launched his second business in 1998, a consumer electronics shop in Beijing, he first built its management structure from scratch. The preparation paid off, and the store grew into a 12-branch franchise in five years.

Then a turning point came in 2003: the outbreak of SARS. Business in Beijing ground to a halt as fear of infection kept shoppers and store staff alike at home. The lack of information on what was happening only generated more fear as the number of deaths continued to rise.

Liu tried to come up with a business model that could operate even under such chaotic circumstances, eventually deciding that online was the way to go. "I wouldn't have entered e-commerce if it hadn't been for SARS," he told the Financial Times in 2012.

Today, JD.com's red, three-wheeled delivery trucks are a part of the everyday scenery in Beijing. But the nation's second-largest online retailer still has a long way to go to truly compete with Alibaba.

In addition to continually upgrading and improving its retailer-type business model, JD.com is also cultivating new business fronts. One example is JD Daojia, a so-called online-to-offline consumer service provider. The company, whose name means "JD comes to your door," offers such services as daily grocery delivery and cleaning services. It is up and running in 12 cities, and there are plans for nationwide expansion. Drone delivery is another area JD.com is exploring. Operational tests are currently underway, and drones could be in use as early this year. Substantially narrowing the gap with Alibaba, however, will likely require a more focused type of growth.

Jialong Shi, head of China Internet research at Nomura International in Hong Kong, points to the fact that "JD.com, with its IPO, has sufficient fund for mergers and acquisitions." He believes that, in addition to its existing strategic partners, "acquisitions of more online shopping platforms would help expand its customer base in categories like apparel, where JD.com still needs more improvement."