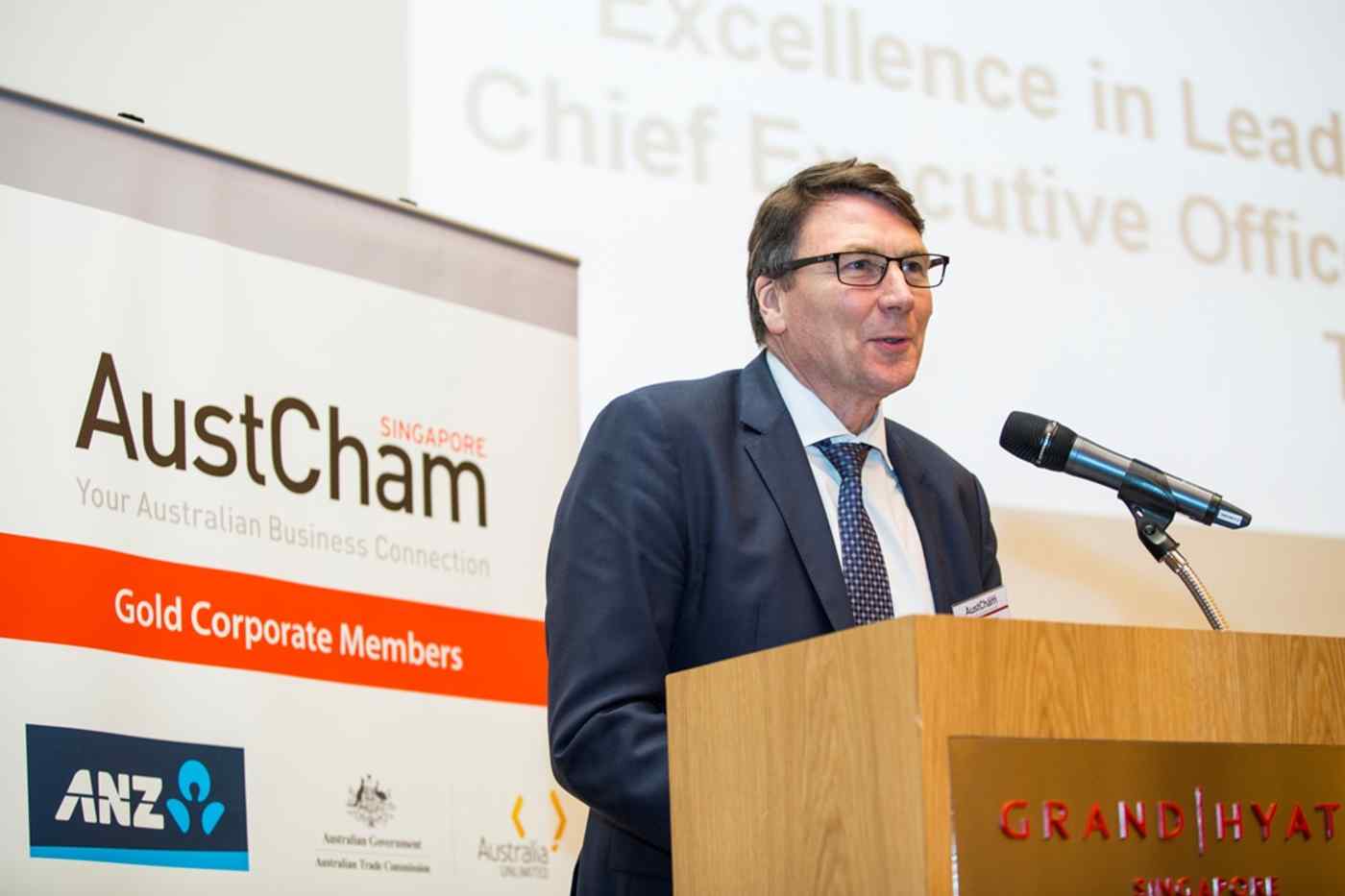 SINGAPORE -- It is not often that a chief executive in an industry seen as having limited growth opportunities almost doubles his blue chip corporation's market capitalization in six years.

But that is what David Thodey did at Telstra. The 60-year-old head of Australia's biggest telecommunications group stepped down April 30, leaving a company worth 77.2 billion Australian dollars ($60.4 billion). Originally Australia's government-owned postal and telecommunications monopoly, Telstra was privatized in stages between 1997 and 2006.

On his watch, customer numbers in Telstra's mobile telecommunications business grew from 10.6 million on June 20, 2010, to 16.4 million on Dec. 31, 2014, with gross margins in mobile rising from 35% to 40% in the same period. Over the same time frame, Telstra's customers for fixed-line broadband services rose from 2.2 million to 3 million, as margins edged up from 40% to 42%. In the 2014 financial year ended in June, Telstra increased its dividend from 28 cents to 29.5 cents per share, the first rise since its 1997 public listing.

Thodey's tenure has been roundly lauded as a triumph, not just because of the group's higher market value on the back of sustained financial performance and improved market share, but also its vastly improved relationship with stakeholders.

"David took over as CEO in 2009, when there were many issues pending," Sachin Gupta, a telecom industry analyst at Nomura, said Feb. 20 in a note to clients. He pointed to the structure of Australia's broadband network, the need to re-engage with the government and the transition to wireless, as well as the questions of securing profitable share and divesting noncore businesses, such as directories arm Sensis.

"David and his team seem to have tackled these issues well, and have added shareholder value on most counts, we think," Gupta said. "Importantly, Telstra has really shifted and improved its approach toward customers, which is never easy for any incumbent telco."

Thodey spoke with the Nikkei Asian Review in Singapore on April 29. "Our media assets are doing well, and the other area of the group that is growing well has been the enterprise services business," he said. "So there is still growth in the core, but that is not enough for our aspirations."

Thodey believes that traditional telecommunications companies can continue to succeed -- if they are nimble in changing their pricing models and are prepared for more radical corporate reinvention, in the face of intense digital disruption and competition from companies such as Google and Facebook. "Telecommunications companies have [historically] charged [their customers] against an old paradigm -- time, distance, etc. -- but new technologies are allowing a new charging model," Thodey said.

Thodey said Telstra took note when the WhatsApp application, which offers free messaging to smartphone users, was introduced in the Netherlands three years ago and virtually wiped out the small-business revenue of KPN. The Dutch telecom company was once a state-owned monopoly.

"Once we saw that, we changed our pricing models to include unlimited text messages, for example, in the pricing bundle," Thodey said. "I think you will see new ways to price telco services going forward, driven by digital disruption."

Thodey added that in his 40 years in the technology sector, he has never seen technological change occurring so rapidly. "When you look at digital disruption, robotics, artificial intelligence and all of these things coming from all quarters of the globe -- it is moving."

Thodey said Telstra must be cognizant of that whirlwind: "We have to wrestle with what it means for us, and we have to be part of that change -- we cannot stand still."

He said Telstra and other formerly dominant telecommunications companies need "to reinvent ourselves," stressing: "We need to do it to ourselves before someone does it to us; we have to lead the change, not follow."

The changes brought about by digital and other technologies have fundamentally altered how companies do business, he said, not least the role of leadership.

"The days of command and control leadership are over," Thodey said, citing the deployment and subsequent widespread use of social network Yammer within the organization. This allows staff at all levels of the Telstra hierarchy to communicate problems and collaborate in solving them.

"I get to communicate with people I would never have spoken to in the organization --  it's really changed the way I and the whole company work," he said.

Thodey is the first Telstra chief since the departure of Frank Blount in 1999 to leave in an atmosphere of corporate calm. Ziggy Switkowski resigned in 2004 after losing board support over expansion plans and the poor performance of international acquisitions. Sol Trujillo, who replaced Switkowski in July 2005, resigned in 2009 after a bruising battle with the Australian government over regulation.

In 2020, Telstra will lose the profit stream from its traditional copper network, which has been sold to a new government-owned company called National Broadband Network in a deal worth A$12 billion. The arrangement with NBN is a key reason why Telstra has turned to Asia for future expansion, Thodey said.

"The fundamental structural change in the industry is forcing us to look at new growth strategies. We are expanding the enterprise services business, we have invested in e-health, we have bought into the Ooyala video software business and we have expanded into Asia on top of that." Ooyala, based in Silicon Valley, was acquired in 2014 for $270 million.

In April, Telstra completed its largest Asian acquisition since 2001 with the $697 million purchase of Pacnet. The Singapore and Hong Kong-based Internet services company has 46,000km of undersea fiber networks, along with data centers across Asia.

The acquisition will more than double Telstra's head count in Singapore to 350, according to Nick Lambert, Telstra's Singapore global enterprise and services managing director.

"With our Asian coverage we can bring software from the U.S. into Asia," Thodey said, adding that the company would only make acquisitions in the region that would improve shareholder value.

Thodey also emphasized the importance of deals such as one signed last year by Telstra and Telekomunikasi Indonesia to provide cloud services for business customers.

"We have an aspiration that a significant portion of our revenues and profits comes from Asia in the future," he said, without specifying a ratio.

Thodey surprised Australian business circles Feb. 20 when he announced that he would step down at the end of April. But he told the NAR that he had been planning the move for the past 12 months.

"If I were to sign up for another three or four years I would be in my mid-60s, and I think my options after that would be more limited," he said. "And I do really believe that companies need reinvention and reinvigoration."

For the second time in succession, Telstra's board has opted for an internal replacement. Thodey, who joined the group from IBM in 2001, was leading its enterprise division before being picked for the top job.

His successor is Andy Penn, who joined Telstra as chief financial officer in 2012, after running the Asia-Pacific operations of French insurance group AXA for six years. Unlike Thodey, Penn inherits a company near the top of its game, and it will be his job to keep it that way.