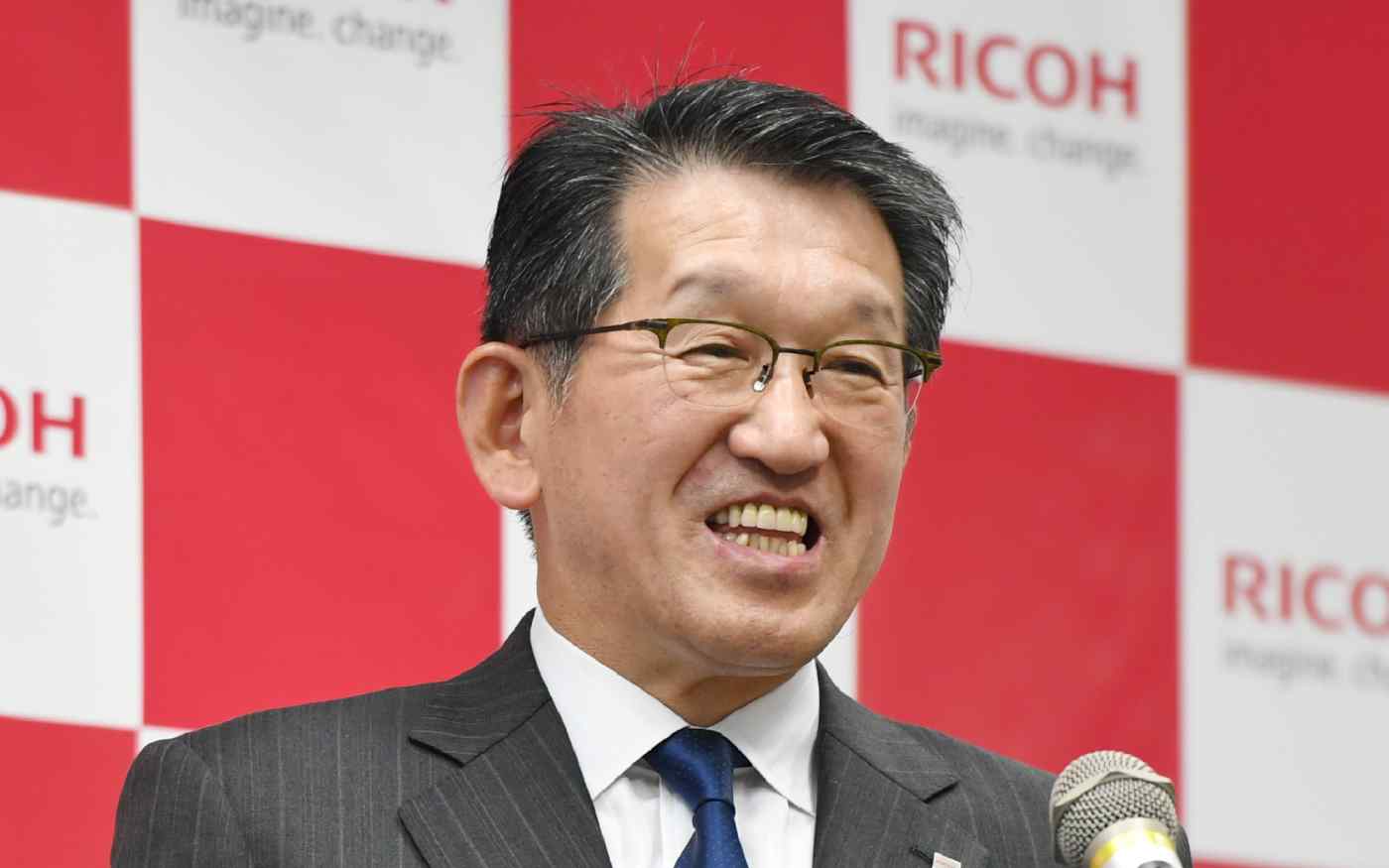 Ricoh President and CEO Yoshinori Yamashita appears at an event in January 2017 after the announcement that he would take the top position at the company. Since then, he has embarked on reform under the slogan "Clear Departure from the Past."
HIROMI YAMABATA, Nikkei staff writerDecember 1, 2017 16:00 JST | Japan
CopyCopied

TOKYO -- When Ricoh's newly appointed President and CEO Yoshinori Yamashita gathered his leadership team in his office in April, the executives quickly understood that more than the nameplate had changed. They found themselves huddling over a meeting table with no chairs -- Yamashita's way of promoting faster decision-making.

The office equipment maker had built its business on five strategic pillars: pursuing market share at all costs, even by sacrificing profit; expanding the overall number of machines in the field; providing a full lineup of products across all price ranges; in-house manufacturing as opposed to outsourcing; and deploying its own huge direct sales team.

Ricoh, Yamashita seemed to realize, was doing it all wrong.

Now the company is in a race against time to reform itself -- breaking not only with its own past but that of Japan Inc., with its sprawling enterprises that did everything themselves. Ricoh dug itself into a hole with its aggressive global expansion. It is trying to claw its way out by, for example, streamlining its North American operations and cutting off financial support to its Indian unit. But is it simply in too deep to quickly boost its earnings?

The pursuit of scale forced Ricoh to spend heavily, especially on its U.S. operations, which have turned out to be slow to adapt to changes in the market. Rivals like Canon are quickly moving away from copiers as paperless offices take hold. Ricoh is one lap behind in making such tough choices.

His predecessors, including Masamitsu Sakurai, who served as president for 11 years from 1996, nurtured the North American business through takeovers and other efforts. Ricoh's acquisition of U.S. office equipment maker Ikon Office Solutions for about $1.43 billion in 2008 was one example. The deal helped the Japanese company significantly boost its market share and establish a foothold in the global market.

But what had seemed to be a success left Ricoh hamstrung once the paperless office trend began to hit earnings. The Ikon deal included a vast direct sales network with thousands of representatives, making it difficult to embark on sorely needed restructuring. 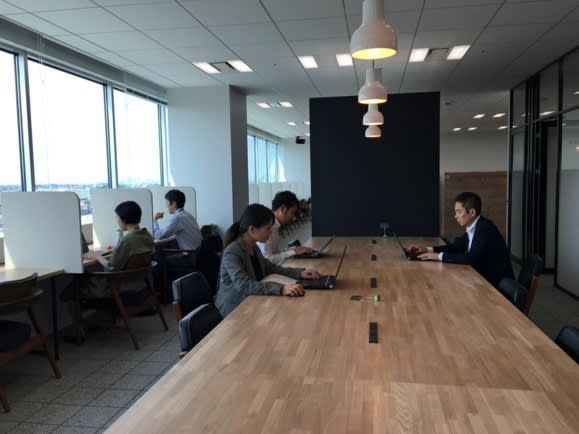 As modern offices are increasingly paperless and digitized, Ricoh can no longer count on sales of copiers and ink.

Upon becoming president in April, Yamashita directed units in the U.S. and elsewhere to outsource sales of multifunction printers to external dealers. Ricoh sold 6.3 billion yen ($56.5 million) worth of printers in the April-June quarter, pushing up the company's earnings significantly. The number of employees in North America was reduced by about 2,500 to 28,000 in six months. 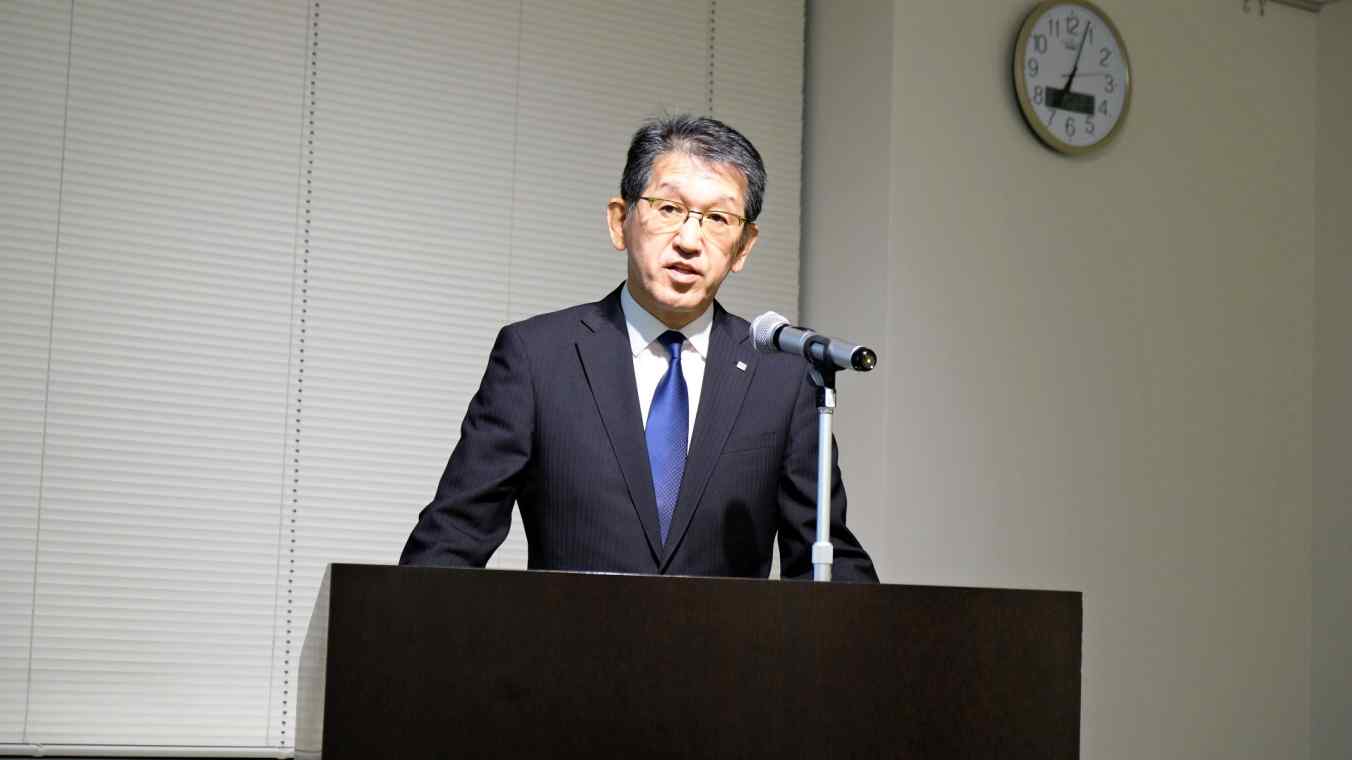 At a briefing on his midterm management plan in mid-April, Yamashita said Ricoh would rethink its emphasis on expansion in pursuit of market share, and focus more on profit. In the past, sales staff would seal deals even if they involved hug discounts and were unprofitable. Future sales of ink and durable parts would eventually bring in the cash, the thinking went. But in the age of digitized workflows, the office supply market is quickly shrinking.

He noted that Ricoh's global direct-selling system was effective when the industry was growing, but had turned into a serious drag on efficiency.

Pulling the plug in India

Yamashita's other major decision was to pull the plug on its Indian unit, Ricoh India. That company, which was founded in 1993 and is listed on the Bombay Stock Exchange, played an important role in cultivating emerging markets, but stalled when accounting fraud emerged in 2015. The parent Ricoh increased capital to the Indian unit last year, but Yamashita decided to cut this cord and seek legal liquidation.

This was not an easy decision to make, though outside directors and others had demanded Ricoh terminate the support. Pulling the plug will result in Ricoh posting losses of up to 36.5 billion yen for this fiscal year, the company's first red ink in six years.

At his April-September earnings briefing on Oct. 30, Yamashita emphasized the achievements of his reforms. These include the company's operating profit jumping 33% on the year to 22 billion yen despite the losses related to Ricoh India.

But Yamashita said there is still much to be done. He set up a CEO office to gauge the progress of structural reforms and implement additional measures, if necessary.

The biggest question will be how to boost the earnings of Ricoh's domestic multifunction printer business. Hiroshi Hamada, who served as Ricoh president for 13 years from 1983, formed powerful sales forces known as "roving samurai," propelling Ricoh to a position comparable to its rivals Canon and Fuji Xerox. Distributor Ricoh Japan, which has about 20,000 employees, is in charge of domestic marketing.

Though it is struggling, Ricoh's office equipment business generated operating profit of 48.1 billion yen in the April-September period. The business's operating profit margin of 6.2% is lower than that of its rivals, but is still a cash cow for the company. However, Ricoh will need to cut its workforce as it did in the U.S. and other overseas markets to improve earnings.

Kiyoshi Ichimura, the founder of Ricoh, formulated the group's principles in 1946. They inform how Ricoh does business, encouraging employees to constantly improve and contribute to the well-being of all stakeholders, including their own families, customers and society at large.

The necessary reforms run counter to that spirit. And some Ricoh executives have expressed concern that if restructuring fails, worker morale -- and earnings -- could suffer. 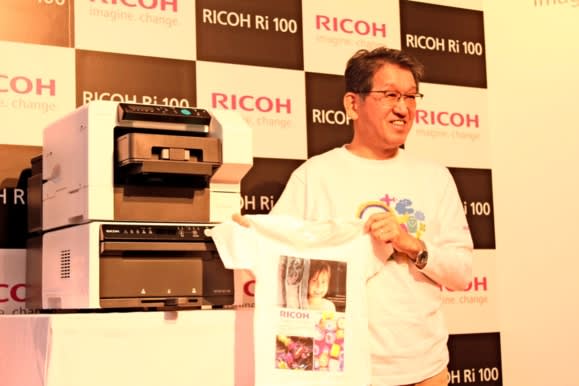 CEO Yamashita unveils the company's new T-shirt printers on Nov. 16 while modeling one himself.

Nurturing the next source of earnings will be another challenge. Yamashita sees industrial printing as a new pillar. At an unveiling of the company's new T-shirt printers on Nov. 16, he wore a T-shirt he had printed himself.

Ricoh enlisted the cooperation of Fast Retailing President and Chairman Tadashi Yanai in developing the T-shirt printer. Designed for use in outlets of the Uniqlo casualwear chain, the printer is priced at around 300,000 yen, about one-third to one-fourth competitors' prices, making it affordable for smaller businesses.

However, one Ricoh executive said it is still unclear how much the T-shirt printer business will expand. The sales target is only 10 billion yen for fiscal 2019.

Ricoh lagged behind competitors in diversifying its businesses, as its multifunction printer business had continued to grow since the 1990s. Some former employees said Yamashita's strategies bear watching over the long run, but there are real questions about whether they will be enough to restore Ricoh's earnings next fiscal year and beyond.

Canon and other rivals will not be waiting around for Ricoh to catch up.