Foreign takeovers of Japanese high-tech companies have been as rare as midwinter cherry blossoms, so Hon Hai Precision Industry's acquisition of Sharp inevitably raises the question of how successful the deal will prove. It is noticeable that the only other significant example, Applied Materials' purchase of Tokyo Electron, also took place under the premiership of Prime Minister Shinzo Abe, in 2013 -- though the deal was scrapped 18 months later, due to U.S. antitrust concerns.

The model for a successful foreign takeover in Japan is Renault's 1999 alliance with Nissan Motor, then on the verge of bankruptcy. Carlos Ghosn was drafted in as chief executive and implemented a rigorous rationalization program that slashed capacity and drastically shrank the number of suppliers. Today Nissan is one of the world's most successful auto companies and Ghosn, now CEO of Renault too, is a widely admired figure in both Japan and France.

It is emblematic of today's world that this time the acquirer is a first-generation Asian entrepreneur rather than the boss of a time-honored European or American company. Still, Gou will have his work cut out to pull off a Ghosn-style turnaround. The problem with Nissan was its balance sheet, not the competitiveness of its cars, and it was operating in an industry where change was accretive rather than disruptive. On both scores, Sharp is much less favorably placed.

Originally a manufacturer of pencils, the 104-year-old Sharp became a pioneer in radio and TV production and made the world's first pocket calculator. It was one of several Japanese groups -- the others being Sony, Panasonic, Toshiba and Hitachi -- that bestrode the global electronics market like giants in the 1970s and 1980s, but have subsequently seen their fortunes dwindle. 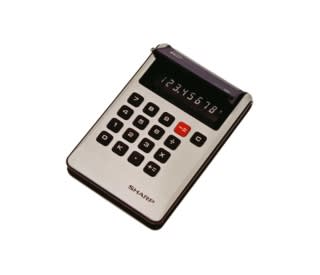 A Sharp calculator with an LCD screen, released in 1973. (Courtesy of Sharp)

In contrast, the rise of Hon Hai, commonly known as Foxconn, which was established in Taiwan by Chairman and Chief Executive Terry Gou in 1974, is principally a 21st century story. Today the company is the world's largest contract manufacturer, with revenues of over $130 billion and a stock market capitalization more than 15 times that of Sharp.

It has accomplished this on the back of two powerful megatrends -- the emergence of China as the world's low-cost manufacturing center and the ascendancy of Apple, with its "platform company" model of outsourcing production. Most of Foxconn's production is in mainland China, where it operates a chain of huge "factory-cities" that employs more than 1 million workers. Its biggest customer by far is Apple.

These twin phenomena will not continue forever -- in fact, they may have peaked already -- but together they have put a merciless squeeze on the Japanese electronics industry. On one side, many consumer and industrial electronic products were commoditized, as prices fell in sync with the cost of production. On the other side, Apple's innovations, design skill and brand power allowed it to dominate the higher end of the market while generating extraordinary margins.

Japanese companies responded to the challenge in different ways -- through offshoring, withdrawing from unprofitable businesses, and becoming suppliers of key components to the iPhone and iPad. Most were too cautious. Sharp was too bold, effectively betting the farm on two new product lines -- solar panels and liquid crystal displays for TVs and computers. These were considered to have high potential by just about everybody at the time, but they required vast capital expenditures and ended up being commoditized with alarming speed. Sharp found itself in an impossible position in which, as the Japanese proverb goes, it was "hell to advance and hell to retreat."

CREATIVE DESTRUCTION   It is tempting to see the Foxconn takeover as a symbol of Japanese economic malaise; tempting, but wrong. Creative destruction is the hallmark of a dynamic economy and, if anything, Sharp's bankers had allowed it to stagger on too long. The other potential acquirer, the state-backed Innovation Network Corporation of Japan, would have been unlikely to make the tough decisions needed to put the company back on its feet.

Gou's plan offered greater financial rewards to shareholders, too. With improved corporate governance being a key part of Abe's reform program, it would have been a backward step to reject the higher bid on vague grounds of protecting the national interest. Especially in the electronics industry, openness is realism. Supply chains are global and relations between key players are constantly shifting.

So the deal is a positive step for Japan. If it hits difficulties, as many takeovers do, it will still have been a positive step. Foreign direct investment -- whether in the form of mergers and acquisitions or building from scratch -- is important not so much for the capital it brings, but for the new ideas, techniques and ways of doing business it introduces.

What Japan's consumer electronic companies have lacked is not creativity -- Sharp launched its Zaurus personal digital assistant as long ago as 1993 and the world's first camera-phone in 2000 -- but commercial nous and strategic vision. Sharp chose to stay domestic when all the action was global; it did not protect its intellectual property sufficiently; it failed to make the right alliances; it did not prioritize and it still makes far too many diverse products.

The most important things that Gou can bring to Sharp are business savvy and understanding of the global big picture. What he is getting in return is the opportunity to break away from dependence on China and Apple. Without innovative products of its own, Foxconn will never be more than a supersized "job shop" operating on wafer-thin margins.

It could work. After all, Apple was on the verge of bankruptcy in 1997. If it does, it could inspire other Japanese electronics majors to make deals with foreign companies rather than gradually sinking beneath the waves.

Japan knows a lot about corporate longevity. The Sumitomo group was founded a century before the U.S. Sudo Honke, Japan's oldest sake brewer, has being going since 1141 and Hoshi Ryokan, a hot springs hotel, since 718. Such businesses have survived for so long because they have provided what customers wanted through centuries of upheaval. In comparison, Sharp is a mere spring chicken. If it follows the same principle, then some of its business will live on and prosper, albeit in a different guise.