Passengers wait in line to have their temperature checked at a railway station in Mumbai on Nov. 26.   © Reuters
KIRAN SHARMA, Nikkei staff writerDecember 8, 2020 23:57 JST | India
CopyCopied

NEW DELHI -- Two Indian companies have applied for emergency approval of their COVID-19 vaccine candidates in a country that is the second-worst hit by the coronavirus pandemic, days after U.S. drugmaker Pfizer did the same.

The Pune-based Serum Institute of India, or SII -- a manufacturing partner for the Covishield vaccine candidate from Oxford University and AstraZeneca -- and Hyderabad-based Bharat Biotech, which is developing an indigenous vaccine called Covaxin, have sought emergency use authorization, Health Secretary Rajesh Bhushan told a media briefing on Tuesday.

Multiple vaccine candidates are in different stages of development, Bhushan said, adding that six of them including Covishield and Covaxin are in clinical trial stages in the country.

"Some of them may get licensed in the next few weeks," Bhushan said.

Three candidates are under consideration for licensing, V.K. Paul, a top health adviser of the government, told the same briefing, describing this as "a great development." 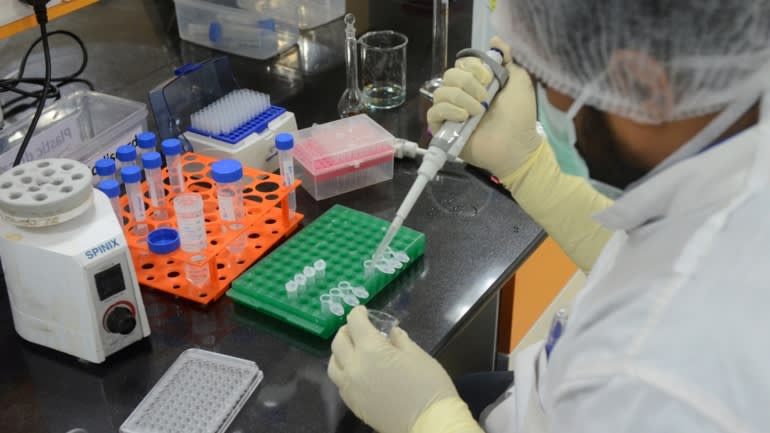 A research scientist works inside a laboratory of the Serum Institute of India, which has applied for emergency approval of a COVID-19 vaccine candidate.   © Reuters

The U.K. on Tuesday became the first country to begin using the vaccine developed by Pfizer and its German partner BioNTech. Britain and Bahrain announced last week that they had granted emergency use authorization for the vaccine.

On Friday, Indian Prime Minister Narendra Modi held a meeting with leaders of various political parties to discuss the country's COVID-19 vaccine strategy. "It is expected that the corona vaccine will be available in the next few weeks," Modi said.

"As soon as we get the green signal from scientists, we will begin vaccination in India," the prime minister said, noting that the priority groups, such as health care and front-line workers and high-risk individuals, are being identified for inoculation during the first phase.

"India has vaccine distribution expertise and capacity as well," Modi said. Officials are assessing the additional cold chain equipment and logistics needed for the purpose, he said.

India's distribution expertise and capacity can be gauged from the fact that its universal immunization program, the largest in the world, targets around 26.7 million infants and 29 million pregnant women every year, according to official data. Around 9 million sessions are held annually to deliver vaccines to people who need them.

Earlier in October, Health Minister Harsh Vardhan had said India was expected to receive and use 400 million to 500 million doses of COVID-19 vaccines covering approximately 200 million to 250 million people by July 2021. On Tuesday, Bhushan said India's COVID-19 vaccination drive will have "minimal impact on routine health services, including routine immunization."

However, Pfizer's two-dose vaccine -- which has also not undergone trials in India -- requires storage at minus 70 C, which could pose a challenge to India for distribution in rural areas. SII's vaccine, on the other hand, needs to be stored at 2 C to 8 C.

"While Pfizer's vaccine can be provided to people in big cities such as Delhi and Mumbai where deep freezers of minus 70 degrees can be arranged, smaller cities can rely on those being developed by SII" and others not requiring such temperatures, Rajinder K. Dhamija, a professor and head of the neurology department at Delhi's Lady Hardinge Medical College, told Nikkei Asia.

"If we have the supplies of all these vaccines, we can use those supplies based on the situation and the location," Dhamija added.

The professor said the cost of the vaccine matters more than the logistics in India, a developing country with a population of over 1.3 billion that has more than 9.7 million confirmed COVID-19 cases and nearly 141,000 deaths. Pfizer's two-dose vaccine will cost around 3,000 rupees ($40) compared with Serum's 1,000 rupees, he said, pointing to the affordability of SII's vaccine.

According to Abhishek Kumar Sinha, a medical doctor overseeing COVID-19 sampling and contact tracing in a city in eastern India, many more vaccine developers are likely to seek emergency use approval.

But "Pfizer and Moderna have the safest vaccine profile," he told Nikkei, referring to another U.S. drugmaker. "My take is that it's not wrong to bring [to India] a vaccine with [such a] safety profile even if it is not studied in the Indian population."

Dhamija added that if trials have taken place among diverse populations in other countries, that could be considered for giving emergency use authorization. "If a regulator is satisfied with that, it can give emergency approval."

Meanwhile, India may not need to inoculate its entire population.