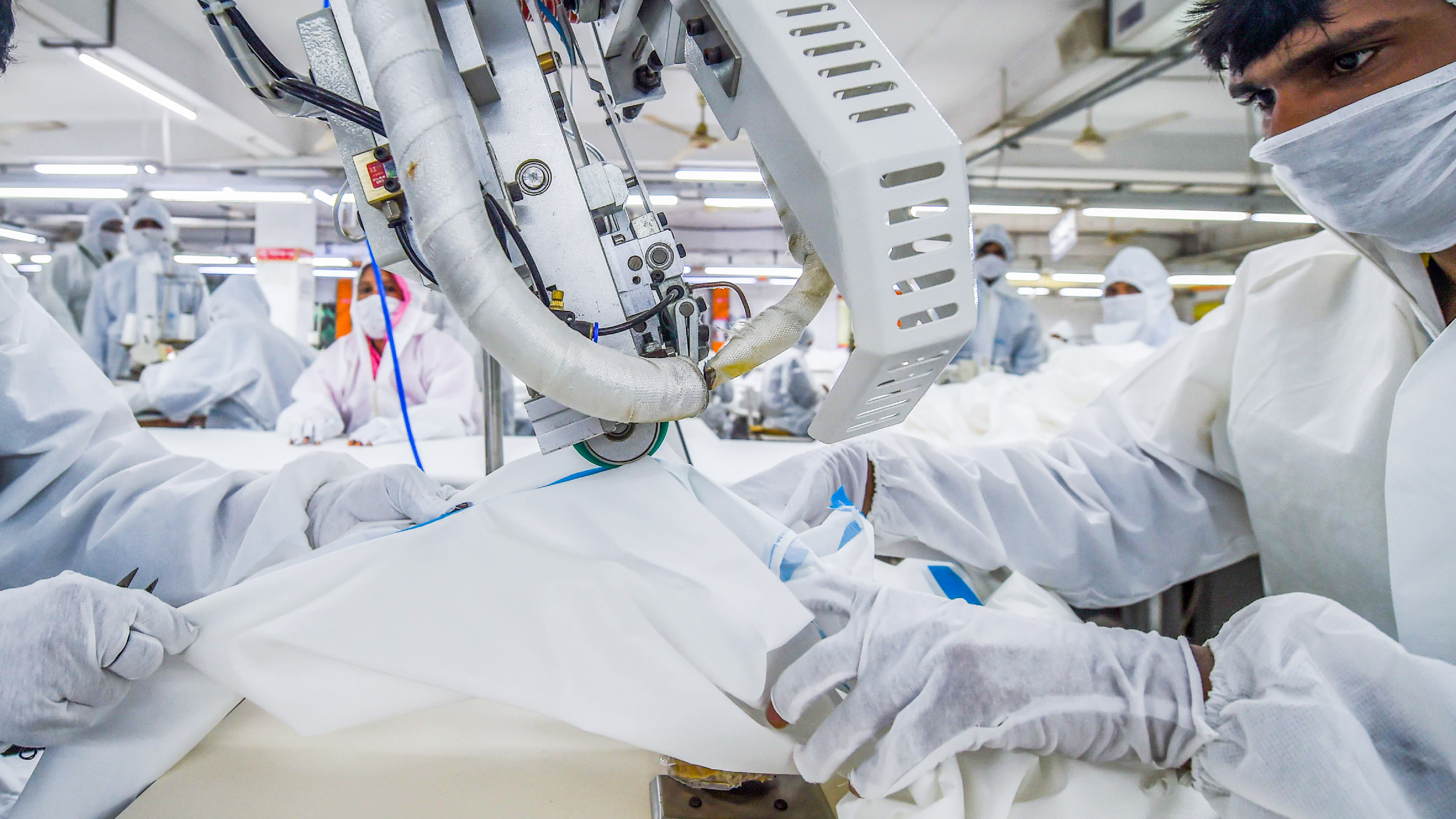 DHAKA -- The coronavirus pandemic has sent orders plummeting for most manufacturers in Bangladesh, like their peers elsewhere.

But Beximco Group, a sprawling conglomerate which calls itself the country's largest private-sector employer, has turned the outbreak into an opportunity to show off its ability to churn out advanced products.

The group's pharmaceutical business was the first globally to start making and exporting a generic version of remdesivir, a drug in the spotlight as a treatment for COVID-19.

Beximco's textile and apparel unit, one of the largest in Bangladesh, in May exported 6.5 million medical gowns custom made to the specifications of the U.S. Federal Emergency Management Agency. Company officials now project that sales of personal protective equipment, or PPE, will match that of all other textiles combined.

Beximco is not the only Bangladeshi company offering advanced products in response to the coronavirus pandemic which has killed more than 2,700 Bangladeshis and infected over 210,000.

Five other local drugmakers are also working on clones of remdesivir, which was developed by California-based Gilead Sciences. Zaber & Zubair Fabrics, a home furnishings producer, and clothing maker APS Group have meanwhile both unveiled new fabrics treated to kill the new coronavirus and other germs on contact. Zaber & Zubair is producing 1.5 million masks made from its fabric for a customer in Dubai.

Beximco, however, is unique in producing both COVID-19 drugs and PPE.

The group, founded by siblings Ahmed Sohail Fasihur Rahman and Salman Fazlur Rahman, began as a commodity trading house in the 1970s before expanding into sectors including energy, banking, information technology, real estate and media.

Hassan's company is Bangladesh's top pharmaceutical exporter and third-largest overall producer by sales. With a secondary listing on the London Stock Exchange's Alternative Investment Market, the company is 3% owned by Norway's government pension fund and has benefited from Dhaka's policy of restricting drug imports. While Gilead has reached licensing agreements with Indian companies including Cipla, Jubilant Life Sciences, Mylan and Dr. Reddy's Laboratories as well as Pakistan's Ferozsons Laboratories to produce remdesivir, Beximco and its Bangladeshi peers have no license. Instead, they rely on their country's ability to override patent rights under World Trade Organization rules for less developed countries.

While Beximco Pharma is supplying Bemsivir, its version of remdesivir, at $56 a vial to local private health care facilities, Gilead last month set a price of $3,120 for six vials of remdesivir, the typical five-day course prescribed for COVID-19 treatment, for U.S. patients covered by private insurance.

Since last month, Beximco has exported 25,000 vials of Bemsivir to customers in Nigeria, Azerbaijan, the Philippines, Venezuela and Pakistan, where it is cooperating with local drugmaker Searle.

"We are dealing with queries from 30 countries," said Chief Operating Officer Rabbur Reza, who added that the company has raised production to 80,000 vials a month, with an eye toward doubling that by the end of August.

Beximco has also been donating Bemsivir to local public hospitals since getting approval for its formulation on May 21. Authorities in Bangladesh, the U.S., Japan, India and elsewhere have endorsed intravenous use of remdesivir to treat critically ill COVID-19 patients.

Bemsivir is not Beximco Pharma's only COVID-19 offering. The company has also launched a copy of Fujifilm's antiviral drug Avigan under the trade name Viraflu and is producing hydroxychloroquine under the brand Kovicin. It is also promoting Ivera, its version of Ivermectin, an anti-parasitic drug seen by some researchers as a possible coronavirus treatment.

Beximco Pharma already exports five drugs to the U.S. and has regulatory approval for nine others there. Its production facilities have also been certified by regulators from Europe, Australia, Canada and other nations.

COVID-19, however, has had a mixed impact on the company.

In reporting its fiscal third-quarter results last month, Beximco Pharma noted that the pandemic had depressed visitation to hospitals and clinics and caused prices for active ingredients for its drugs to climb.

The unit warned its revenue growth for the year ended June 30 would likely be less than previously expected while noting that sales for the first nine months had risen 13.3% to 19.11 billion taka ($221.31 million). Analysts surveyed by Refinitiv estimate that Beximco Pharma's annual gross profit margin contracted by almost 1.5 percentage points to 46.4%.

Still, Abdullah Al Faisal, who previously tracked the sector as an analyst with EBL Securities, expects revenue growth reached 20% for the April-June quarter with help from sales of Bemsivir, Ivera as well as other formulations seen as boosting immunity against COVID-19.

"Ivera sales were far from robust," he said. "But after the COVID outbreak, its sales have increased dramatically."

The group's new PPE unit, set up with a $30 million investment in late March, is now making 50 million masks, gowns and other types of protective gear a month.

"We have unleashed our world-class manufacturing, technical and design talent to switch over and start making PPE," said Syed Naved Husain, Beximco chief executive and group director. "We want to make Bangladesh a PPE hub."

He projected that the company will export $250 million worth by the end of this year. Next year, he sees exports doubling and domestic PPE sales reaching $120 million.

If realized, this would be a tremendous boost for Beximco Ltd., the group's flagship listed unit on the Dhaka and Chittagong stock exchanges. Textiles generated 21.2 billion taka ($245.53 million), or almost 90% of the unit's total revenue, in the year ended June 2019. Total revenues for the first nine months of the current fiscal year were down 10.5% at 16.44 billion taka.

Rajib Kumar Das, head of research at brokerage UCB Capital, said Beximco's PPE targets may be achieved but he doubted the business would be sustainable at that level. "Demand will fall when effective vaccines for COVID are found," he said.

Beximco's contract to supply the U.S. Federal Emergency Management Agency (FEMA), with washable long-sleeve gowns came via American clothing company HanesBrands, which in April won an order valued at $250 million to supply 20 million such garments to the bureau.

While Beximco officials told the Nikkei Asian Review that they expect to supply Hanes with the balance of that order, FEMA said on June 29 that it had already received 16.2 million gowns from Hanes, suggesting the company may have already procured gowns elsewhere. Spokespeople for Hanes did not respond to requests for comment.

Beximco, meanwhile, is working on setting up a PPE plant in Detroit in partnership with another textile company and is investing in a mask plant with a second partner in Texas as well as considering similar projects in Europe.