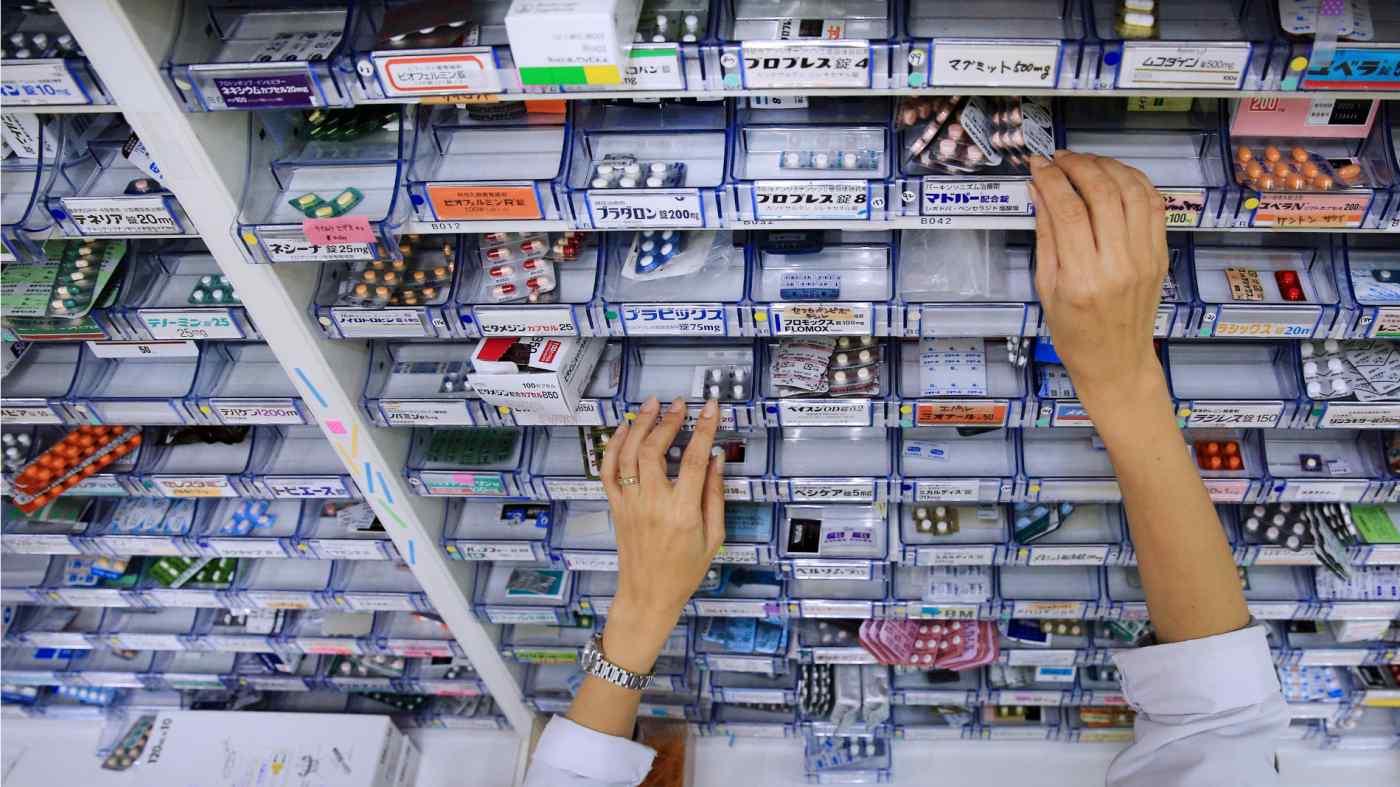 TOKYO -- Three days after Beijing endorsed the Japan-developed flu drug Avigan as a treatment for COVID-19, Indonesia is importing millions of doses to treat its patients, President Joko "Jokowi" Widodo said during a live-streamed press briefing from the Presidential Palace on Friday.

"No antivirus has been found. But some drugs have been tried in several countries and caused recovery -- namely Avigan," Jokowi said. "We have imported 5,000 doses, and are in the process of ordering 2 million more."

Avigan, the antiviral drug developed in Japan, has suddenly drawn global attention after Chinese medical authorities suggested it was effective in treating the new coronavirus.

But behind its rise is a three-decade struggle marked by twists and turns, according to interviews with people involved in its development. That history may be both a blessing and a curse for its producer, Toyama Chemical, as it joins the global race to find a cure for coronavirus. The advantage of Avigan in the context of the current crisis is that "there is a national reserve as well as extensive research and tests conducted for influenza," said Yohei Doi, who leads clinical trials at Fujita Health University. "On the other hand, we don't yet know if it reduces the virus when given to humans." He said the results from research in China were encouraging, but that many details, such as the profile of patients that had received the drug, had still not been made public.

Avigan, known generically as favipiravir, had its beginnings in 1990 as a project to develop a completely new kind of antiviral drug by Toyama Chemical, a midsized pharmaceutical company located in central Japan that is now owned by Fujifilm Holdings.

At the time, the company had some good treatments for bacterial infections but no expertise in developing drugs to treat viral infections. Bacteria are relatively complex, single-celled organisms that can reproduce on their own. Viruses, on the other hand, are much smaller and cannot survive long without a host. They can only reproduce by attaching themselves to cells.

To progress in this field, Toyama Chemical sought the support of Kimiyasu Shiraki, a Japanese virologist at Toyama University. Their original goal was the development of a treatment for herpes, an infection caused by the herpes simplex virus that causes such symptoms as blisters, ulcers and cold sores.

Over 20,000 compounds owned by Toyama Chemical were tried in experiments on thousands of animals, but none proved more effective than already existing herpes treatments, Shiraki recalled in an interview with Nikkei in 2014. Indonesian President Joko Widodo is seen speaking to the media at the Presidential Palace in Jakarta. His press briefings have shifted to live steaming due to coronavirus precautions.    © Reuters

In 1997, the goal of the project was changed to the development of a cure for diseases caused by multiple viruses. One year later, the project led to the discovery of a promising compound that appeared to be effective in treating various iterations of the flu.

Avigan interferes with the virus's ability to copy itself. Unlike other widely used anti-flu drugs Tamiflu (under the generic name seltamivir) and Relenza (zanamivir), which cripple influenza's ability to spread from cell to cell by blocking a crucial enzyme, neuraminidase, Avigan works by stopping the genes of the virus from replicating within infected cells.

Toyama Chemical did not have the financial weight to conduct the testing required for international approval, so it reported its discovery at a medical conference in 2000, with the hope of finding a partner to take development forward. But it failed to draw the interest of any major drugmaker.

The market for antiviral drugs is small because they are used only on active flu cases during the relatively short duration of infection. Such medicines generally do not have good chances of becoming cash cows for pharmaceutical companies. Drugs for lifestyle diseases -- such as heart disease, stroke, obesity and type 2 diabetes -- which are often used for long periods, and vaccines, which are used also on healthy people, offer more alluring profit prospects.

Another blow to the business outlook of Avigan came in 1999, when rival flu drug Tamiflu, developed by Swiss pharmaceutical giant Roche, hit the market. Avigan, which goes by the generic name favipiravir, is a drug approved as an anti-flu medicine in Japan and developed by Toyama Chemical, a subsidiary of Fujifilm Holdings. After clinical research in China suggested its efficacy in treating the new coronavirus, trials are now planned in Japan.    © Reuters

As Avigan's future looked more uncertain, the company had no choice but to pull the plug on the project. Cash-strapped Toyama Chemical sold part of its shares to Taisho Pharmaceutical in 2002.

Then in 2003, the fortunes of the drug began to turn, when the U.S. National Institute of Allergy and Infectious Diseases started looking for a potential treatment for a highly toxic new flu pathogen.

In 2006, NIAID reported that Avigan could be the only effective cure for the new strain of influenza after some 3,000 medicines and trial compounds were tested. The news prompted Toyama Chemical to relaunch the project.

In 2008 Toyama Chemical was acquired by Fujifilm Holdings, which supported the project in hopes that Avigan might be an effective remedy for a wide range of viruses. But the development of the drug continued to be plagued by problems, including some serious side-effects.

Animal experiments indicated that the drug might be teratogenic -- that it could cause developmental malformations in embryos or fetuses. In addition, clinical tests suggested that Avigan was less effective than Tamiflu as an anti-flu drug.

But Toyama Chemical did not give up and applied for approval of the drug from Japan's Pharmaceuticals and Medical Devices Agency, a government-affiliated agency for ensuring the safety, efficacy and quality of drugs and medical devices.

It took the agency three years to complete the approval process, far longer than the typical one year. And despite the agency's approval, Avigan was not made widely available because of the issues related to its efficacy and side-effects.

Ryota Asada, a senior official at the National Hospital Organization Nagoya Medical Center, said in a 2014 interview with Nikkei that the PMDA approved the drug despite its problems probably because it wanted a potentially powerful tool in the nation's medical arsenal as a hedge against a possible new flu epidemic. 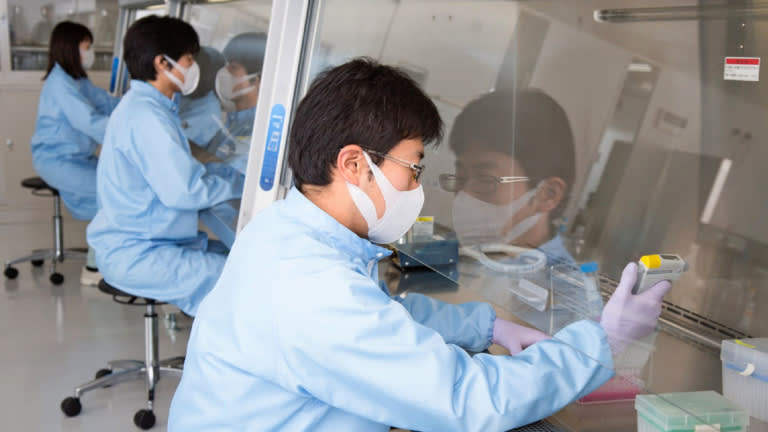 Researchers work at a Toyama Chemical facility. The company was acquired by Fujifilm Holdings in 2008. (Photo courtesy of the company)

The drug returned to the global medical spotlight due to the outbreak of the Ebola virus in West Africa, which started in 2014.

There was a report that a French nurse who contracted Ebola in Liberia in September 2014 was cured after she was given Avigan.

In 2016, Japan supplied the drug as emergency aid in response to the Ebola virus outbreak in Guinea.

Fujifilm also struck a deal to license the patents of Avigan's generic form, favipiravir, to China's Zhejiang Hisun Pharmaceutical. That paved the way for recent clinical research in Wuhan and Shenzhen involving 200 patients following the outbreak of the new coronavirus.

Results from those studies showed that patients who received the drug tested negative for the virus after a comparatively short time, while pneumonia symptoms were markedly reduced. "It is very safe and clearly effective," said Zhang Xinmin, director of the China National Center for Biotechnology Development, which comes under the country's science ministry, in a news conference on March 17.

Following these latest developments in China, a Fujifilm spokesperson said it was now preparing to conduct clinical trials of its drug in Japan.