Taisho Pharmaceutical, the top Japanese player in over-the-counter medicine, is reportedly a leading candidate. But with the coronavirus pandemic clouding the outlook for markets and the economy, whether negotiations will proceed remains unclear.

The subsidiary, spun off from Takeda in 2016, boasts a product lineup with names that are well known in Japan, such as the Alinamin vitamin brand and cold medicine Benza Block.

But the consumer business struggles with weaker profitability than prescription drugs in a low-growth domestic market, holding Takeda back in a highly competitive industry. 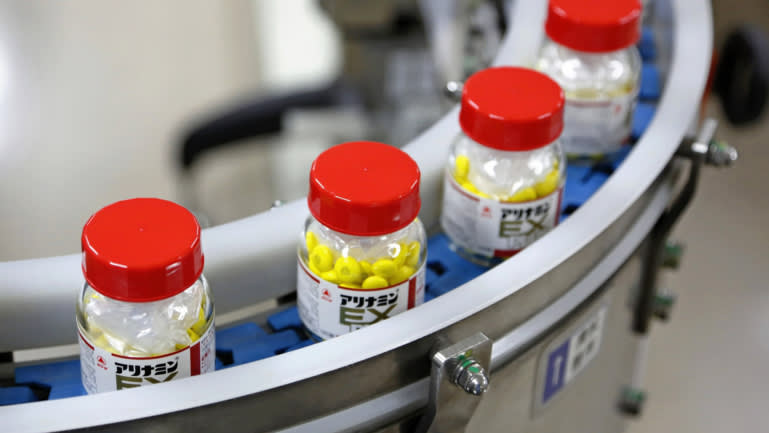 Blood products, a Shire specialty, and ulcerative colitis drugs added to Takeda's portfolio from its 2008 acquisition of U.S.-based Millennium Pharmaceuticals will be among the Japanese company's main profit sources going forward. The drugmaker will focus on developing treatments for cancer, diseases of the digestive system and central nervous system, and rare conditions.

Takeda forecasts revenue of 3.3 trillion yen for fiscal 2019, which would make it the world's ninth-largest pharmaceutical company.

Takeda had been weighing a sale for some time but was reluctant to part with strong consumer brands. The unit booked operating profit of 12.9 billion yen in the year ended March 2019 on revenue of 64.1 billion yen.

The situation changed with the Shire acquisition, which raised Takeda's interest-bearing debt to more than 5 trillion yen, or over $46 billion, as of the end of 2019. The company has announced a plan to divest $10 billion worth of noncore operations to lighten this burden.

The plan is about 75% complete, with $7.6 billion in divestments announced since the Shire deal. Takeda sold its Xiidra dry-eye drug to Novartis in June 2019, a transaction worth up to $5.3 billion. On Friday, the Japanese drugmaker said it would sell part of its European operations to Denmark-based Orifarm Group for up to $670 million.

Takeda aims to halve its net interest-bearing debt to two times adjusted earnings before interest, tax, depreciation and amortization by the end of fiscal 2023.