Herbal medicines being used on the coronavirus frontline, but mainly in China

SHANGHAI -- Many Chinese people are using traditional medicines to help fight off the new coronavirus, but the ancient cures still face a test of international acceptance.

While laboratory-developed drugs such as Avigan and remdesivir are touted for their potential to fight the virus itself, traditional Chinese medicine, or TCM, has been prescribed in China to relieve mild pneumonia symptoms in COVID-19 patients.

TCM treatments were given to 74,187 patients in China, or 91% of the country's total confirmed cases, the government said in March, adding that they have prevented mild cases from becoming severe.

"TCM might not be the main treatment used, but Chinese were willing to accept it as an alternative medicine because it has been part of their culture," said Hu Yuwan, research director with Daxue Consulting in Shanghai. "And due to the natural ingredients used, some prefer TCM whenever possible because of its lower side effects compared to Western drugs."

Stocks tied to these medicines have attracted investors in recent months. Shijiazhuang Yiling Pharmaceutical traded 4% higher in Shenzhen on Wednesday, the first day of trading after a Labor Day break. The share price has risen 170% year-to-date to 33.66 yuan (about $4.70).

One of the company's over-the-counter flu drugs, Lianhua Qingwen, was cited by a well-known health expert Monday in a state-organized television dialogue with Chinese students overseas.

The drug is one of the few TCM adopted by the Chinese commission in January as a primary treatment option for COVID-19. 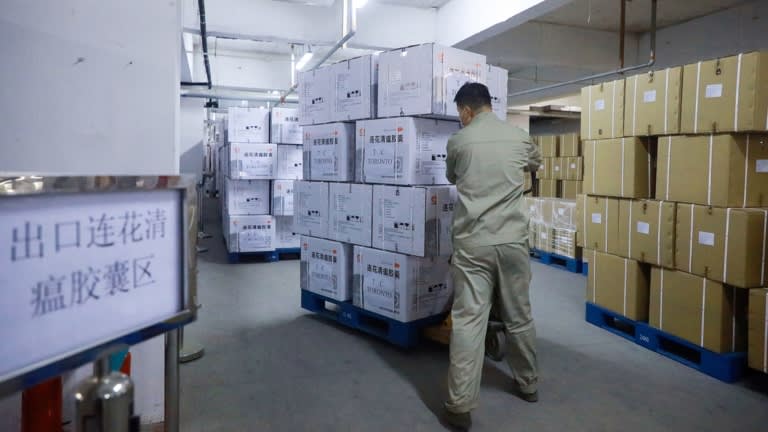 TCM, which costs less than conventional health care, is regulated in China. Beijing issued the first policy paper on the products in 2016, citing their "unique value" in prevention and treatment of illnesses such as severe acute respiratory syndrome, HIV/AIDS and hand-foot-and-mouth disease.

The issuance reflects President Xi Jinping's interest in revitalizing and developing this industry, the paper said. China aims to provide every citizen access to basic TCM services by 2020, with full adoption in all areas of medical care by 2030.

At the height of China's coronavirus epidemic, over 4,900 medics from TCM hospitals were sent to Hubei Province -- 13% of the health care providers dispatched to the outbreak's epicenter, state news agency Xinhua said.

Lianhua Qingwen, developed in the aftermath of the 2002 SARS outbreak, has been listed by the National Health Commission since 2004 for treatment of influenza and other respiratory diseases. The medicine, sold in capsule and granular form, contains ingredients including forsythia, isatis root and almond.

Its maker, Yiling, has accelerated production to meet rising demand. Brazil, Canada, Indonesia and Thailand are some of the countries that authorized sale of the medication, while it also has been approved to enter phase 2 clinical trials by the U.S. Food and Drug Administration, the company said. 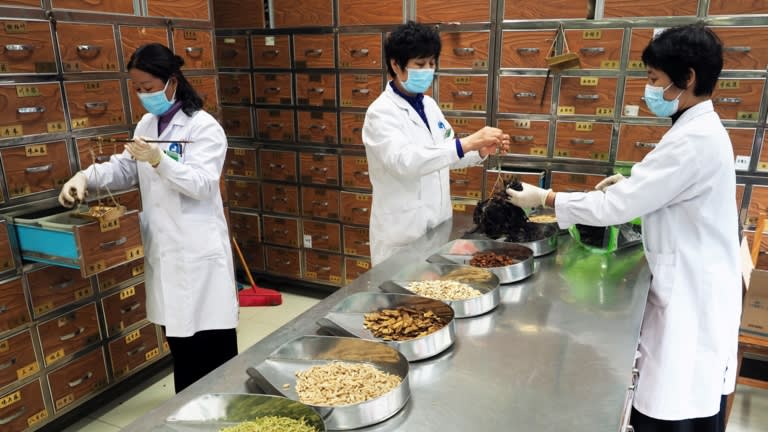 Infection rates show no sign of slowing in many countries, while vaccine research and development requires time. These factors mean that drugmakers will continue to benefit from strong sales of medicines shown effective in treating COVID-19, said Flora Zhu, director of corporate research at Fitch Ratings in Beijing.

"However, the magnitude of the sales growth varies depending on the drug's indications, whether it is for treatment of light or severe cases, [the] sales channel and distribution networks," she said.

Sales of Lianhua Qingwen accounted for 66% of the Yiling group's revenue in the first quarter of 2020, up from 29% in the year-ago period, Zhu said. Yiling also shipped the medication to Italy and Indonesia as part of China's aid to help battle COVID-19 abroad.

But TCM's relative lack of scientific vetting means that wider adoption as an alternative medicine outside China remains a hurdle -- a fact recognized by Yiling.

"Although many countries appreciate Lianhua Qingwen as a powerful medicinal solution to tackling the pandemic, it still has a long way to go," Wu said.

Some in the West have raised concerns over TCM remedies, saying they have not undergone thorough clinical trials for COVID-19.

"For TCM, there is no good evidence, and therefore its use is not just unjustified, but dangerous," Edzard Ernst, a U.K.-based retired researcher of complementary medicines, was quoted in Nature magazine on Wednesday,

Yet with no vaccine on the horizon and infections surpassing 3.7 million worldwide, TCM has an opportunity to be widely adopted.

"TCM's profile has risen more than before since it is proven in China as a treatment in mild cases," said Daxue's Hu.

Wendy Wong, a registered Chinese medicine practitioner and assistant professor at the Hong Kong Institute of Integrative Medicine, said that countries everywhere should be trying to combine existing medical knowledge from their cultures with Western medicine.

"The roadmap to bridging the Chinese medicine and Western medicine industries for a broad spectrum of disease management is still a far way off for many key stakeholders," Wong said. "It is difficult to say whether TCM or WM are complementar, or whether we should walk forward with integrative medicine."