MANILA -- Expanding pharmacy chains selling a growing range of generic medicines reflect the pace of growth in the Philippine pharmaceutical sector -- and have caught the interest of powerful conglomerates.

The value of the transaction was not disclosed, but gives Robinsons Retail a network of over 1,800 lower bracket pharmacies, nearly all franchises. Robinsons Retail is headed by Chief Executive Lance Gokongwei, heir to the family business.

Last year, Ayala Corp., a holding company of the Zobel business dynasty, acquired half of Generika, TGP's nearest competitor. Generika which has nearly 600 branches, over 20 added since last year.

"We believe this is an excellent platform for Ayala to reinvent the space and serve as [a] foundation for our emerging healthcare portfolio," said Fernando Zobel de Ayala, the group president and chief operating officer, when the deal was announced. 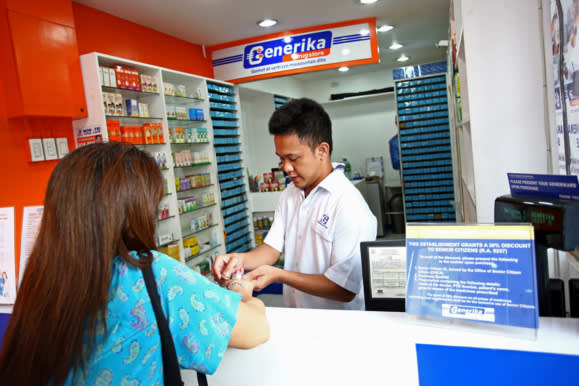 Ayala Corp. owns half of Generika, a 90% franchised pharmacy chain, and wants to lift the proportion of company-owned outlets to 33% by 2020.

Ayala sees plenty of scope for growth in healthcare given a fast growing population. In 2013, it also ventured into mid-size QualiMed hospitals, and more recently private community clinics.

"Together with our partners, our goal is to grow Generika to over 1,000 stores by 2020," Chief Executive Paolo Borromeo of Ayala Healthcare Holdings told the Nikkei Asian Review.

Currently, around 90% of Generika's branches are franchised, but Ayala wants to raise the proportion of company-owned outlets to 33% by 2020.

The TGP acquisition gives Robinsons Retail drugstore operations a boost. Among its various department, specialty, and convenience stores, it has over 300 Southstar Drug branches, which cater to a more upmarket clientele.

The Universally Accessible Cheaper and Quality Medicines Act of 2008 imposed caps on medicine prices. That encouraged doctors to prescribe cheaper alternatives, which expanded the market for generics. By 2014, they accounted for 65% of the market compared to 40% in 2009, according to the Pharmaceutical and Healthcare Association of the Philippines.

FT Confidential Research, a Financial Times research service, expects the market share of generics to reach 70% by 2020 due to increased state spending on healthcare funded by revenue from rising excise collections in the form of so-called sin taxes.

The Philippine pharmaceutical market is Southeast Asia's third largest after Indonesia and Thailand, according to a 2011 think tank paper from the Philippine Institute for Development Studies. It estimated that medicines account for 46% of medical out-of-pocket expenses in Philippine households.

Euromonitor International said sales at Philippine pharmacies, which mainly sell over-the-counter drugs, grew by nearly 30% to 32.9 billion pesos in 2015 from 2010. The figure is expected to rise 10% to 36.3 billion pesos by 2020.

With pharmaceutical giants stepping up marketing efforts and incentivizing doctors to prescribe their brands, TGP and Generika have in recent years embarked on public information campaigns using new and traditional media channels.

"We expect increased acceptance of generic medicine from the general public as they become more aware on its benefits and value," Ayala's Borromeo said.

Shares in Ayala rose 2%, while those in Robinsons Retail dropped 0.2% on Tuesday as Manila's stock index grew 0.7%.