Nine of the most valuable conglomerates -- included on the Nikkei Asian Review's A300 list of the region's largest and most dynamic companies -- grew their aggregate net profit by 29.36% on the year in the July-September term, on a 7.13% increase in sales.

Duterte, the firebrand former mayor of the southern city of Davao, took office on June 30 and has since launched an aggressive anti-narcotics campaign and shifted the country's foreign policy. Thousands of drug suspects have been killed, and the government's international posture is now less reliant on traditional allies -- namely the U.S. 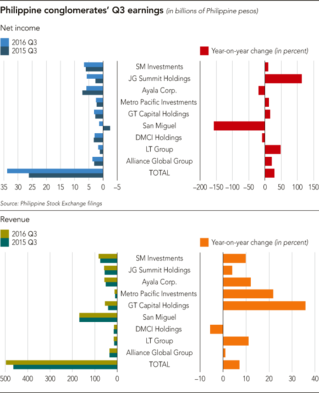 So far, however, the economy has been left largely untouched, pending some relevant legislation and Duterte taking full budgetary control next year.

Another consumer company, LT Group, posted a 11.09% jump in sales to 15.23 billion pesos, along with a 48.25% increase in net income to 1.68 billion pesos. The growth was driven partly by increased tobacco and liquor sales.

GT Capital Holdings' revenue soared 35.83% to 54.67 billion pesos, largely fueled by sales from its car dealership business, which climbed 63.78% to 49.38 billion pesos. The company -- which is also involved in banking, insurance and real estate -- saw net income rise by more than 16% to 3.19 billion pesos.

Metro Pacific Investments, the owner of major utilities on the main island of Luzon -- home to two-thirds of economic activity -- logged 11.4 billion pesos in revenue, up 21.79% on the year thanks to higher vehicular traffic on its toll roads and a higher billed volume of water.

"The third-quarter results somehow give you a glimpse of the economy's performance," said Astro del Castillo, managing director at First Grade Finance. "But this is still momentum from the previous government."

The economy expanded nearly 7% during the first half, as election-related spending boosted already robust domestic consumption. This put the country at the front of the Southeast Asian pack, in terms of gross domestic product growth.

The Philippine Statistics Authority will release its third-quarter GDP figures on Thursday. The government expects 6.3-7.3% growth for the period.

Del Castillo said the macroeconomic fundamentals are still intact and domestic consumption, which makes up 70% of the economy, remains strong. Duterte's impact on earnings could be seen next year, he added.

Meanwhile, some companies are also bracing for the possible ramifications of Donald Trump's presidency in the U.S. The real estate mogul won last week's election after pledging to crack down on illegal immigration as well as slash taxes -- his way of encouraging American companies to relocate back to the U.S.

PLDT CEO Manuel Pangilinan on Monday said some business process outsourcing companies decided to postpone investments in the Philippines after Trump's victory. The telecom company provides high-speed internet access to many American call centers and BPO providers in the Philippines.

"It could be a tough [situation] not only for us but also for the economy as a whole," he said. "It is something to look out for."

The $20 billion-plus BPO industry, which has created a million jobs, has also provided a tail wind for real estate companies like Ayala Land and SM Prime Holdings, due to demand for office and residential space.

Analysts are closely watching how Trump's policies could affect the more than 3 million Filipino expats in the U.S., too. These people are major contributors to the roughly $25 billion in remittances that flow into the Philippines annually.