HONG KONG -- Plant factories, in which vegetables and other crops are grown indoors, are cropping up in Hong Kong amid growing awareness about food safety among the middle class.

With some 20 companies entering the market over the past three years, annual production of hydroponic farms is expected to reach 750 tons.

In late November at a supermarket in the territory's Wan Chai district, Davis, a 35-year-old man who works at a financial institution picked up packaged vegetables produced by the Vegetable Marketing Organization, an operator of the vegetables wholesale market. Davis, who only provided his first name, said he has the feeling that Chinese vegetables are contaminated with pesticide residues and tries to buy vegetables that are grown in Hong Kong or overseas as much as possible.

In 2013, VMO established Hong Kong's first indoor plant factory with the support of the Hong Kong government. The second floor of a building -- an area of about 230 sq. meters -- was renovated into a clean room. Adopting systems of Japanese chemical maker Mitsubishi Chemical, the room has an air conditioning to maintain an optimal room temperature, water treatment equipment that recycles water, and lighting facilities for indoor cultivation.

Currently, five types of vegetables, including potherb mustard, rocket salad and Chinese flat cabbage, are grown, with a crop ready for harvest every 21 days. A daily harvest of 15kg is shipped as packaged salads. Although the retail price of 48 Hong Kong dollars ($6.19) per 100 grams is more expensive than Chinese vegetables, they are selling well at local supermarkets and convenience stores, including 7-Eleven.

In anticipation of growing demand, VMO plans to start growing tomatoes and strawberries on a trial basis soon, and double production from the current level in the future. 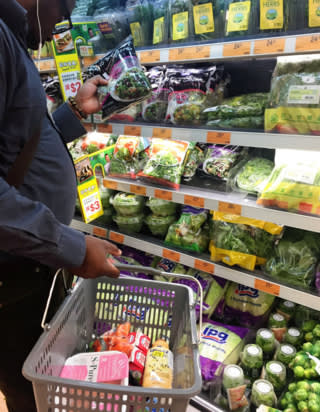 A supermarket on Hong Kong Island. Demand for organic vegetables is growing, particularly among middle class consumers, due to concerns over pesticide residues in Chinese vegetables.

"We plan to diversify our products and make better choices for middle-class consumers," said Kenneth Law, market manager of VMO.

Scatil, another operator of hydroponic farms in the New Territories, in northern Hong Kong, focuses on mail order business that directly ships products to consumers. Customers can have fresh vegetables delivered to their home within 24 hours of harvest by placing orders in advance. A free shipping service with a purchase of HK$250 or more is also popular with customers. The company plans to boost crop yields after gauging demand trends.

According to data compiled by the Hong Kong government, more than 90% of the city's daily vegetable consumption of about 2,300 tons comes from mainland China. Although the authorities set stringent safety standards, consumers are still concerned about food safety, Law said.