TOKYO -- Thanks to the plus-size personality of a hugely popular comedian, Japan's apparel industry finally seems to have cottoned on to the idea of catering to every market.

The fashion industry across the world has seen a backlash against its obsession with size-zero models, and many people have sought to challenge unrealistic expectations of what women should look like.

But in super-skinny Japan, the so-called plus-size segment of the market has perhaps been neglected more than anywhere else.

Naomi Watanabe is known for bright, tight outfits, garish performances and taking pride in the fact she is unlikely to ever be described as a size zero. The 29-year-old's body-positive message has been an inspiration for women across Japan. Having long neglected the "small" market for women like Naomi, apparel makers are taking note.

In April, Japan's leading mail-order company Nissen launched Alinoma, an online shopping mall dedicated to full-figured women. The name is an abbreviation of the Japanese word "arinomama," or "just as you are."

The site drew so much attention that the number of brands looking to sell on it almost doubled before it even opened. They include popular names such as youth brand earth music & ecology and 23ku, a name you will often see at Tokyo's upmarket department stores.

"They have been much keener than we expected," said Nissen's Satomi Ohashi. The site now hosts 58 brands and carries some 1,900 items. In the first three months, sales were 150% higher than initially estimated and the site got 13 times more hits than projected.

It's not uncommon for expensive items like 30,000-yen ($271) dresses to sell well on the site. "We hope to become the plus-size Zozotown," Ohashi said, referring to Japan's popular online fashion marketplace.

In the spring, men's fashion retailer Aoki announced plans to increase the number of its Size Max outlets by 150% to 150 within four years. For the April-July period just gone, sales at existing outlets grew 10% on the year. Aoki Holdings President Akihiro Aoki said he wants to make Size Max "the company's third pillar after Aoki and Orihica."

Much of the clamor to access the plus-size market can be put down to the industry waking up to the fact it has previously ignored the segment.

For retailers, holding stock at brick-and-mortar stores in sizes that fit around one in 10 people can be bit of a gamble. "It was more efficient to prepare goods in bulk for the mass market," the head of an apparel maker admitted.

But fashion, of course, is supposed to be fun; not only do people have different body shapes but different tastes as well. Focusing on the mass market and producing similar items in large quantities has itself led to a buildup of unsold inventory, and contributed to the stagnation in today's apparel industry.

Consumers' views are changing, too. Since Naomi came on the scene, women of all shapes and sizes have felt encouraged to spend on looking beautiful, industry insiders claim. 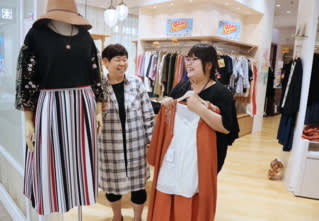 Popular styles at Nissen's smiLeLand plus-size clothing stores have changed accordingly. Shoppers used to go for long shirts and blouses that hung over the hips and tended to prefer darker colors, the company said. More recently, however, it has seen customers of various sizes buying more shorter lengths and brighter colors.

In 2013, Tokyo-based publisher Bunkasha launched "la farfa," a magazine dedicated to full-figured women. The publication ships 70,000 copies and often runs features in collaboration with Japan's upmarket department stores like Isetan and Mitsukoshi. "Uniqlo [clothing chain] and Amazon have also expressed interest in collaborating with us," the publisher said. With the industry becoming more in tune with real body shapes, it has had to adapt. In December, Osaka-based manufacturer Nanasai began running outsize mannequins on a test basis. After they were well received by major brands, the company decided to commercialize the mannequin and it debuted in March.

The plus-size clothing segment remains a small one in Japan, and, like any niche market, is susceptible to getting saturated very quickly. But for many, the fashion industry's first small steps toward opening itself up to all consumers will be welcome ones.