Tatsuo Nomura would find his land of opportunity in Japan

TOKYO -- In September, Apple held a new product launch event in San Francisco. After CEO Tim Cook and other executives gave presentations, an Asian man took the stage and showed the audience what he had been working on.

"Let's see what hatches," the man said. "Yes! It's a Pikachu!" The audience cheered as the young man demonstrated the popular smartphone game "Pokemon Go" on the Apple Watch.

Those cheers for Tatsuo Nomura, the game's 30-year-old chief developer, were a far cry from what he dealt with as a child in rural China: extreme poverty.

Nomura grew up in a village in Heilongjiang Province, northeastern region of China. Before dawn, in temperatures of around minus 30 C, he and his mother would push a cart around the village to sell tofu. His family mostly ate cornmeal mush.

Nomura, who grew up as Shi Lei, is a grandson of a woman who was among millions of Japanese left behind in China in the final days of World War II. His grandmother married a Chinese man and had a boy, Nomura's father.

There were no automobiles in the village. Every time Nomura heard the sound of an engine coming from afar, he jumped out of his home in excitement. The life of a young boy with an interest in how things work took a dramatic turn when he was 9. That is when his family went back "home."

They wound up in Nagano Prefecture, about 170km northwest of Tokyo, where their relatives lived. The boy adopted a Japanese name -- Nomura is the grandmother's maiden name and Tatsuo was taken from an elementary Japanese language textbook. Nomura could not communicate with his new friends in Japanese. What brought them together was video games. He still remembers the shock he felt when a friend let him play the original Pokemon game. 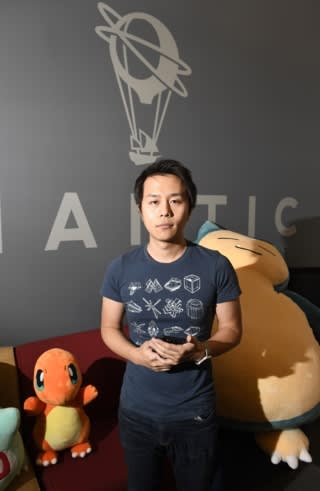 Nomura was born Shi Le, grandson of a Japanese woman left behind in China at the end of World War II. At age 9, his family moved to Nagano Prefecture, in central Japan. (Photo by Akiyoshi Inoue)

The boy's interest eventually turned to how video games work. He bought a computer with money he had earned delivering newspapers and taught himself how to code. At Shinshu University, he built his own "family computer" -- a game console similar to Nintendo's popular Family Computer, which is known outside Japan as the Nintendo Entertainment System. His academic paper on supercomputing at the Tokyo Institute of Technology's graduate school was highly regarded by American researchers, said professor Satoshi Matsuoka who oversaw Nomura's research at the university.

Nomura joined Google's Japan office and then transferred to the company's U.S. headquarters. He thought Google Maps and the hunt for pokemon, or monster characters, would make a great match. Nomura was named lead developer of the game. Tsunekazu Ishihara, head of Pokemon Co., which holds the copyrights to the characters, said he chose Nomura to lead the project because of "his diversity beyond nationality and borders."

Google spinoff Niantic released "Pokemon Go" last summer; it became an instant social phenomenon, hooking 600 million people around the world. Citigroup of the U.S. reckoned the nascent company, which had barely celebrated its first anniversary, was potentially worth $3.6 billion.

Nomura's life may sound like the rags to riches story that Americans love to tell and hear. But he is more grateful to Japan than to the U.S. He believes he would not have been able to receive a good education had he gone to the U.S., where college tuition is high. He thinks Japan offered him a chance to fly.

Since its inception, America has continuously attracted people in search of opportunity. But the country seems to be turning its back on that strength. The election of Donald Trump as president reflects this.

Might the dreamers of today turn to Asia as their land of opportunity? Perhaps with some openness, Asia might someday ask itself, "Let's see what hatches?"

The answer could very well be new rounds of economic growth.

This is the last in a series on Asians who draw on lessons from their youths to build better tomorrows.