SILICON VALLEY "Pokemon Go" developer Niantic hopes the location-based game will encourage players to spend time outside and interact with their communities, CEO and founder John Hanke told The Nikkei.

Hanke discussed the development of "Pokemon Go" and the San Francisco-based company's business plan for the augmented-reality game.

"Pokemon Go" has become a huge social phenomenon in the U.S. and other countries where it is available. Did you expect this? Well, yes and no. We thought that it would be a successful product, because we knew that the main elements of it were proven. The game dynamics were proven in "Ingress" [another augmented-reality, location-based game developed by Niantic] ... and continue to be popular. People really love the exercise and the discovery of new places, and the social aspects of it. And we knew those were strong, in terms of the reward loop for players.

We finished our biggest event ever in Tokyo, and we had somewhere between 10,000 and 15,000 people. So, we knew that was strong. And then, we knew Pokemon was strong. It's a 20-year-strong IP (intellectual property), owned and governed by The Pokemon Company.

But yeah, we felt like putting those things together was like chocolate and peanut butter. It's just a great combination.

We heard stories -- story after story -- about people ... going out with their family and how great it was that their kids actually wanted to do something outside with them -- and [saw] many pictures of that, families playing together. So, that was great.

We had also seen some of that in "Ingress." I mean, those things came through very strong. People who were maybe shy or kind of reluctant to engage with new people [were] talking about how it had been really great for them in terms of providing an outlet for socializing and motivating them to go out and play together with other people.

What is it that you are trying to achieve with "Pokemon Go"? In some ways you could say, "Well, it's just a game." We have a mission, and we're really trying to make a positive impact, in our way. And I want to be humble about that. I don't want that to come across as arrogant, because we know that we're just a small company and this is just a mobile app.

But we do think that there's a problem with people in modern society of just spending too much time inside and too much time with a box, a little screen, too much time not interacting with other people face to face, and not being out in the community and just being visible in the community and bumping into your neighbors and using the public spaces, like parks. In the U.S., a lot of public parks are these sort of sad, neglected places because people just don't go out of their house anymore.

We need to make use of these great public spaces that we have. We need to have activities for kids ... so that they can enjoy being outside and moving around and that we're not just encouraging them to stay in a room interacting with a screen.

So, our goal is to make a positive impact on the world by using those principles when we develop our products. And the principles are to encourage exercise, exploration, discovery of new places and real face-to-face social interaction.

Tell us about your business plan for this game. You have in-app purchase (IAP) as a source of revenue, and you also have what is called "sponsored locations." What are they, and how do they work? We will have sponsored locations in the game, and we'll be launching with McDonald's in Japan. Some McDonald's will be "PokeStops" and some will be "Gyms." And that gives an incentive to the players to go to those locations.

And we have seen businesses already trying to take advantage of "Pokemon Go" in that way. If a business happened to be located near a PokeStop or Gym, many businesses find the lure modules to apply to the PokeStops, for example, to cause them to spawn more Pokemons and to cause more people to be attracted to that area.

So, we're kind of already seeing the basic mechanics being used out there. But it would be used systematically, with our official partners like McDonald's. So those digital items, whether they're PokeBalls harvested from a PokeStop, or Pokemons that are spawning near the Gym, or the Gym battle, those all are a digital incentive for people to gather at those locations and visit those locations.

You were more than successful in getting people out of the house and seeing the real world with "Pokemon Go." But there are many reports of accidents and troubles, which could haveunintended consequences. How do you address those issues? What is the solution? I think relative to the number of people playing, and relative to the number of positive stories that we get from people about exercise ... the number of incidents that have occurred is quite small. Nevertheless, we do take that seriously, and we warn the user every time the application starts to be aware of their surroundings. 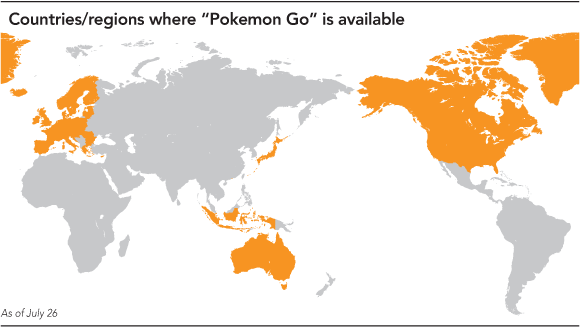 We have users agree, the first time they load the application, that they understand that they need to be safe and be careful while they're playing. So, we do our best to alert users.

I think the analogy is to somebody who might be using Google Maps to get walking directions from one place to another, somebody who is using an app to track their run if they're jogging. There are a lot of apps out there that let you track that. There are apps that let you track your biking and your speed and the route that you're on. So, there are a lot of mobile apps that are made to be used outside and made to be used while you are out and around, and they're wonderful. I mean, they are great ways to use apps when you're not sitting in a chair.

I think with this kind of game experience, it's new, and people are just beginning to understand the social rules around that, and behavioral rules around that. It's a little bit of a bumpy period right now. We're doing our best to encourage everyone to be alert, be aware of your surroundings and to play safely. Yeah, we'll continue to do that.