'Pokemon Go' gets the augmented reality hype train back on track BANGKOK -- It was only last summer that Gartner's annual "Hype Cycle" report said augmented reality, or AR, technology was in a "trough of disillusionment" phase. This, the U.S. research company says, is what tends to follow a phase of inflated expectations about a new innovation.

Now, the launch of the AR game "Pokemon Go" is rekindling that early excitement.

Across the U.S., "Pokemon Go" players are descending on public parks, monuments, landmarks and shops in a quest to catch Pokemon -- cartoon monsters that have been a childhood staple worldwide since the 1990s. The smartphone game displays the locations of the characters on a map of the user's actual surroundings. When the player walks to the right spot and holds up the handset, a monster will appear on the screen in front of a real-world backdrop. AR and geolocation technologies make all of this possible.

Released in the U.S. on July 6, the game shot straight to No. 1 on the country's ranking of smartphone game downloads. As of July 13, the number of daily active users had exceeded those of Twitter and Google Maps, according to U.S. data analysis company SurveyMonkey.

The app made it to Australia, New Zealand, Canada, Germany, the U.K., Italy, Spain, Portugal and 26 other European countries by July 17. The fun was interrupted by server crashes, apparently due to the game's popularity, though there were reports that hackers claimed responsibility for the outages.

The game was expected to be released in Japan -- the origin of the Pokemon series of video games and TV cartoons -- around July 21. China, the world's biggest smartphone market, and other populous Asian countries should get the app before too long. In other words, the "Pokemon Go" boom is just beginning. 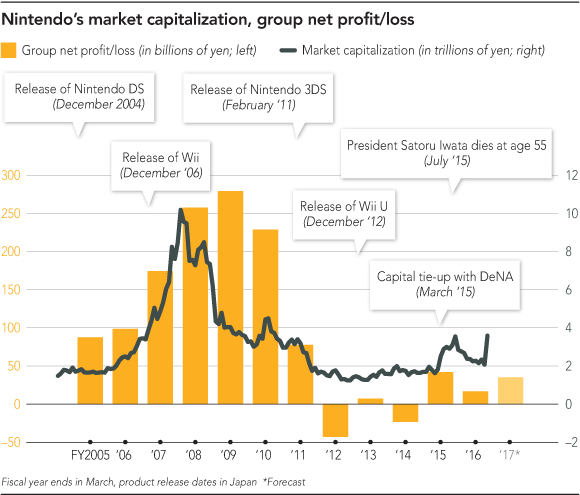 Investors in the U.S. and Asia have seen enough to know they want to be a part of it. Numerous companies have direct or indirect links to the game, and its success has buoyed their stocks.

Nintendo, the producer of the original Pokemon video games, holds a 32% stake in The Pokemon Company, which owns most of the relevant intellectual property and published the "Pokemon Go" app. Nintendo and The Pokemon Company were initial equity investors in the game's developer and operator, Niantic, a Silicon Valley startup that was spun off from Google in fall 2015.

Niantic and The Pokemon Company earn revenue from in-game purchases of virtual tools. Daily purchases by U.S. iPhone users were estimated at more than $1.6 million on July 11. Other estimates project that total cross-platform sales will reach $1 billion by the end of this year.

Nintendo is planning to release in July a dedicated wearable device to accompany "Pokemon Go." Goldman Sachs analyst Masaru Sugiyama estimates that one way or another, the game will add about 17 billion yen ($160 million) to Nintendo's net income for the fiscal year through March 2018 -- assuming the player base and usage rates remain at record levels. 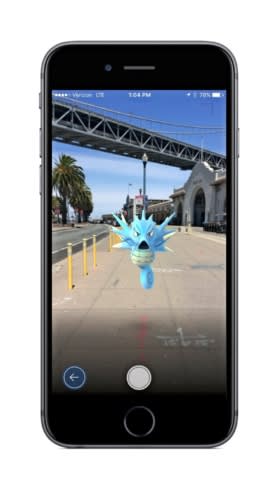 Nintendo's share price surged 121% in the July 6-19 period, from 14,380 yen to 31,770 yen. This added over 2.4 trillion yen to the video game company's market capitalization in just eight trading days, raising the total to 4.5 trillion yen, or about $42 billion. That put Nintendo on a par with a number of blue chip stocks: Sony's market cap as of July 19 was roughly $39 billion, while Nissan Motor's was about $43 billion.

Pokemon fever has given the broader Tokyo market a boost, too. RISING TIDE The Nikkei Stock Average gained 1,390 points during the week of July 11-15, the largest weekly advance since November 1997. A sharply weaker yen and the listing of messaging app operator Line in New York and Tokyo were factors, but Nintendo played a key role. Its July 19 turnover of 704 billion yen -- a record for an individual stock in Japan -- accounted for as much as 23% of total turnover on the Tokyo Stock Exchange's first section.

In Japan, DeNA and Bank of Kyoto were prime examples of Nintendo-linked stocks that attracted attention. DeNA, a mobile game developer, and Nintendo formed a cross-shareholding partnership in spring 2015 and are expected to release smartphone games later this year. Bank of Kyoto owns a 4.2% stake in Nintendo.

Fuji Media Holdings, a national TV broadcaster, also drew interest because it is a Niantic shareholder. Lifestyle website operator All About, which owns a company specializing in location-based games, was another target.

Outside Japan, Chinese internet giant Tencent Holdings' share price hit a new all-time high in Hong Kong during the week of July 11-15, helping the Hang Seng index recover its losses in the wake of the Brexit vote. A stockbroker said there was a rumor that Tencent may market "Pokemon Go" in mainland China.

Some market watchers around Asia have started referring to the Pokemon phenomenon as "Pokemonomics."

TRENDS TO WATCH "Pokemon Go" could trigger a couple of new trends. One is the emergence of what you might call a Pokemonomics ecosystem, in which all sorts of businesses start courting players.

There are already signs of this. In the U.S., some shop owners are participating in the game not for fun but to reel in customers. They purchase items in the game to increase the population of Pokemon "living" in and around their stores, so that more players will come by.

The game operators are also planning to partner with big corporations. They have already agreed to work with McDonald's Japan to make its restaurants gathering spots for players.

A second Pokemon-driven trend could be increased commercial use of AR and VR technologies.

Goldman Sachs, in a January report, predicted that the AR/VR-related market would generate $80 billion worth of revenue by 2025. That was a modest projection, based on the assumption that AR/VR would remain a niche field. In an accelerated scenario -- in which the technology would become a widespread computing platform -- the investment bank said the revenue could reach $182 billion.

Another assumption behind Goldman Sachs' projections was that VR would account for 75% of the market growth, with AR making up the rest. With the likes of Facebook, Google, Sony, Samsung Electronics and HTC all rushing to release VR products, it appeared VR had surpassed AR in terms of commercialization.

But the arrival of "Pokemon Go" may have changed the equation. The game has quickly demonstrated how AR technology can change the way people play and live.

Niantic already had some success with a location-based AR game called "Ingress." The title has attracted a significant following among avid gamers, but it is seen as too complex for casual players. "Pokemon Go" has broken the barrier and delivered an AR experience to a massive audience. It is anything but a niche product.

This raises the odds that Goldman's accelerated scenario will become a reality. And the growth of the AR/VR sector could lead to the formation of a whole new subsector of companies worthy of investor attention.

Some critics do warn that investors may be facing a "Pokemon bubble." Nintendo's share price on July 15 stood at 109 times its projected per-share earnings for the year ending in March 2017. Put another way, the price is not sustainable unless the company's projected earnings get a big upgrade.

Nintendo's stock peaked at 73,200 yen in November 2007, when its Wii game console was fueling record profits. The price-earnings ratio at that time was no more than 50, well below the current figure.

Investors are likely to make cooler judgments once the global "Pokemon Go" rollout is complete. At that point, they will be able to better gauge the game's customer base and usage prospects.

In the meantime, Niantic may become another Silicon Valley "unicorn" -- a private company valued at more than $1 billion.

Success at "Pokemon Go" depends on a user's skill in training the monsters they capture. Likewise, Niantic and stakeholders like Nintendo will need to show they have the skills -- strategic thinking, creativity and execution -- to build on their game's hot start. If they succeed, the current share prices may one day look rather low.