Beijing has managed to curb capital outflow and the yuan's depreciation, but darker clouds may be gathering over China's economy. (Photo by Kenji Kawase)

SHANGHAI -- China appears to have brought its economy to heel before this autumn's National Congress of the Chinese Communist Party. Growth continues at the 6%-plus level, while the yuan's depreciation and capital outflow have halted, for the time being at least.

Official data, notably gross national product, are often taken as a gauge of the state of the economy, but corporate earnings paint a somewhat different picture. For 2016, total net profit of mainland listed companies rose 5.5%, climbing just below the official GDP growth of 6.7%. 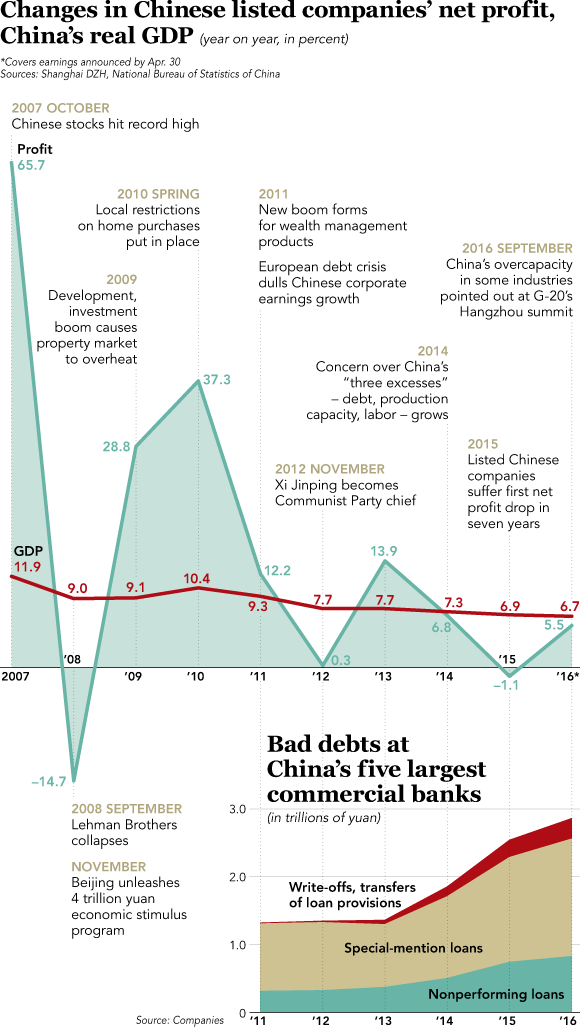 But much of the buoyancy is reliant on a speculative bubble in the property market and policy measures and comes with a number of adverse effects. For the 67 China- and Hong Kong-based companies on the Nikkei Asian Review's Asia300 list for which continuous data is available for over ten years, total net profit in fiscal year 2016 declined approximately 10% from the previous year.

Similar scenes played out in tier-one and tier-two cities such as Shanghai and Xian, while rural towns lie abandoned.

The government has taken measures to rein in the bubble, such as placing restrictions on buying second homes. But both the money supply and total social financing -- China's metric for individual and corporate financing -- have continued to increase at double-digit rates. Without closing the faucet, cash will always flow to assets expected to yield returns.

Land sales in 300 major cities jumped 50% in value year on year in the January-March period. The property market marks the front line between a central government striving to keep the bubble from growing any further and local governments keen to cling on to their key source of revenue.

Chen Jun, chairman of Greenland Hong Kong, the company's Hong Kong listed unit, described the central government's cooling measures as "unprecedented," but said the company would spend 7 billion to 8 billion yuan ($1.01 billion to $1.15 billion) on growing its land bank in 2017, up from 5.5 billion yuan last year.

The real estate sector has a broad impact on related industries. Real estate companies listed in Shanghai and Shenzhen logged a net profit gain of over 30%, while net profit at manufacturers of building materials and home appliances increased more than 20%.

The projection includes recently acquired German robotics maker Kuka's contribution, but it is based on strong domestic demand for the company's home appliances.

The outlook is cautious over the durability of the real estate bull market. Hong Kong-listed state-owned developer China Overseas Land & Investment set its sales target for this year at 210 billion Hong Kong dollars ($27 billion), just under last year's actual sales of HK$210.6 billion. Its smaller peer Poly Property is targeting 35 billion yuan ($5.1 billion), on a par with last year's sales. Moody's Investors Service now expects the growth of nationwide contracted sales of residential property by value to turn negative through May 2018, from a high of 36% year-on-year growth in 2016.

If earnings at property and related industries reflected the effects of the runaway liquidity of the speculative bubble, automakers benefited from government policy. Sales in 2016 exceeded 28 million vehicles thanks to tax cuts for small and midsize cars. Even with tax cuts halved, sales are expected to top 30 million units in 2017.

Chairman Chen Hong is now keen on nurturing its original brand cars. At the Shanghai International Automobile Industry Exhibition in April, SAIC showed off its Roewe model. It plans to increase the number of dealerships for the brand by more than 100 from the current 400 by the end of this year. Although monthly sales of the Roewe have exceeded a mere 20,000 units, SAIC will expand the lineup to include an SUV and electric vehicle.

Chongqing Changan Automobile is keen to take advantage of government support to accelerate growth. "We will build a research and development center in Chongqing at a cost of 4 billion yuan," said President Zhu Huarong.

However, Chinese auto companies are not as robust as recent earnings may indicate. The latest development plan Beijing released on April 25 clearly states that its auto industry is "big but not strong." It listed reasons such as an "insufficient grasp of fundamental core technologies," and the industry being "slow in establishing global brands," and stated that "upgrading of corporate strength is urgently awaited."

Earnings are also improving in industries where the government has sought to reduce excess production capacity, for the time being.

China Shenhua Energy, the country's largest coal producer by volume, saw net profit reach 24.9 billion yuan in 2016, up 41.1% on the year on the back of resurgent coal prices following the government's capacity cutting initiative.

Baoshan Iron & Steel, like much of the steel industry, has also climbed into the black.

Beijing plans similar cuts in aluminum, other nonferrous metals and cement. State-owned enterprises such as Aluminum Corp. of China and Anhui Conch Cement, as the likely survivors, are expected to benefit.

Government coffers are in for a windfall as well. Shenhua is planning to pay a final dividend of 0.46 yuan per share, in addition to a special dividend of 2.51 yuan per share -- its first since 2009 -- after posting its first annual profit growth in four years. With an indirect stake of 73%, the state was the biggest beneficiary.

The size of the dividend far surpassed net profit, but "this is solely based on our group's own decision, rather than suggestions from the government or regulators," Vice Chairman Ling Wen said at a briefing in Hong Kong.

Most companies mentioned above just about managed to book profits as a result of government policy. In contrast, many companies performed poorly in industries closely related to personal consumption.

For China Mobile, the largest telecom carrier, net profit was virtually flat, growing 0.2% to 108.7 billion yuan in 2016 on a revenue that rose 6% to 708.4 billion yuan. Chairman Shang Bing vowed in a filing to "maintain revenue growth from telecommunications services above the industry average, while also delivering industry-leading profitability," but 2017 is expected to be an even tougher year as Premier Li Keqiang has openly called for carriers to lower rates.

"Our business outlays over the last two years altogether topped 200 billion yuan, which enables the current network capacity to provide sufficient support for this year's development. We will therefore duly dial down our investments," said Chairman Wang Xiaochu.

Wang added that the premier's initiative would cost the company at least 1.58 billion yuan per quarter due to the loss of roaming services revenue, while the overall impact remains unclear.

Many food giants find themselves in a similar situation. Tingyi Holding, China's biggest instant noodle producer, saw sales and profit decline for the third year in a row. Chairman Wei Ing-Chou said the company missed sales targets despite an increase in the lineup of high-end products.

Tingyi is not only competing with other noodle makers, it is also losing market share to meal delivery services.

Weak corporate earnings are not necessarily bad for the country's economy if they are a reflection of increased competition resulting from higher incomes. But weak results across multiple industries suggest market saturation caused by slowing economic growth and an aging population.

Low efficiency is another area of concern.

The total assets of mainland-listed companies were up 13% year on year as of the end of December, which outpaced the 5% increase in their net profit and was also roughly double the growth of China's gross domestic product.

Return on assets, an indicator of how profitable a company is relative to its total assets, has continued to fall. It stood at around 1.3% at the end of 2016, down from 1.7% five years earlier.

The total assets of China Vanke and Greenland Holdings jumped 36% and 22% last year, respectively, as they continued to buy land on the assumption that property prices will hold.

A steep increase in public-private infrastructure partnerships has also contributed to the growth of total assets. Leading construction company China State Construction Corp. boosted its total assets by almost 30% in 2016 on an increase in orders.

The oil sector is another example of low efficiency. PetroChina, China Petroleum & Chemical (Sinopec) and CNOOC -- all state-owned -- saw aggregate net profit shrink by 38% to 54.91 billion yuan, while total assets did not stop growing. Hence, the average ROA in 2016 was 1.2%, further sliding from 2.0% a year ago.

Companies in the internet space, like the New York-listed Alibaba Group Holding, are expected to maintain double-digit net profit growth for the year ended in March, according to a market consensus compiled by QUICK-FactSet. Mainland-listed companies booked a double-digit gain in net profit as a whole in the January-March period. The sharp increase was due to weak earnings a year earlier and an increase in government spending on public projects ahead of the Communist Party congress, but problems may surface later this year.

In mid-April, Baoshan Iron & Steel announced a cut in domestic sales prices for May. As the first reduction in about 10 months, following on price hikes the steelmaker has maintained since the autumn of 2016, the shift in strategy portended a change in China's steel market.

Attention now turns to how much longer the economy can be underpinned by infrastructure investment and the property market. The issue of overcapacity remains unresolved as well. Futures markets are already starting to factor in the shift. Deformed bars, used in building high-rises, have fallen 10% in price on the Shanghai market from the end of March to 3,500 yuan per ton.

Relative to stable real GDP growth, corporate earnings usually provide a more accurate snapshot of the second largest economy in the world. In the absence of structural reform, they also reflect how much of a crutch is being provided by government policy.