Pop idols pull most out of 'otaku' wallets

According to a recent study by Tokyo-based Yano Research Institute, 13 of 15 categories in the otaku market expanded in the year through March. The two outliers  -- adult gaming and videos -- failed to ride the trend.

Pop idol-related spending grew the most, by 31%, to 155 billion yen ($1.33 billion). While a number of new groups emerged, AKB48 sister groups, including Nogizaka46 and Keyakizaka46, did well in attracting more fans. Boy bands from Johnny & Associates also grew their fan bases. 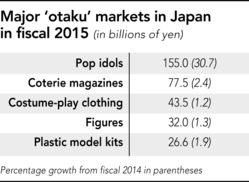 The otaku consumer spent 79,783 yen in this category, more than double the amount he or she spent in the No. 2 category, maid- and cosplay services.

Sales of coterie magazines rose, while foreign tourists boosted the demand for figurines.

Female consumers are becoming dominant in the otaku market. They helped to raise sales in both dating-simulation games, by 7%, to 14.6 billion yen, and in the military category, including survival gaming, which was up 4%, to 15 billion yen.

The research institute estimated the size of each category after interviewing and surveying providers of otaku products, services and those involved in related businesses. They also analyzed consumer data.