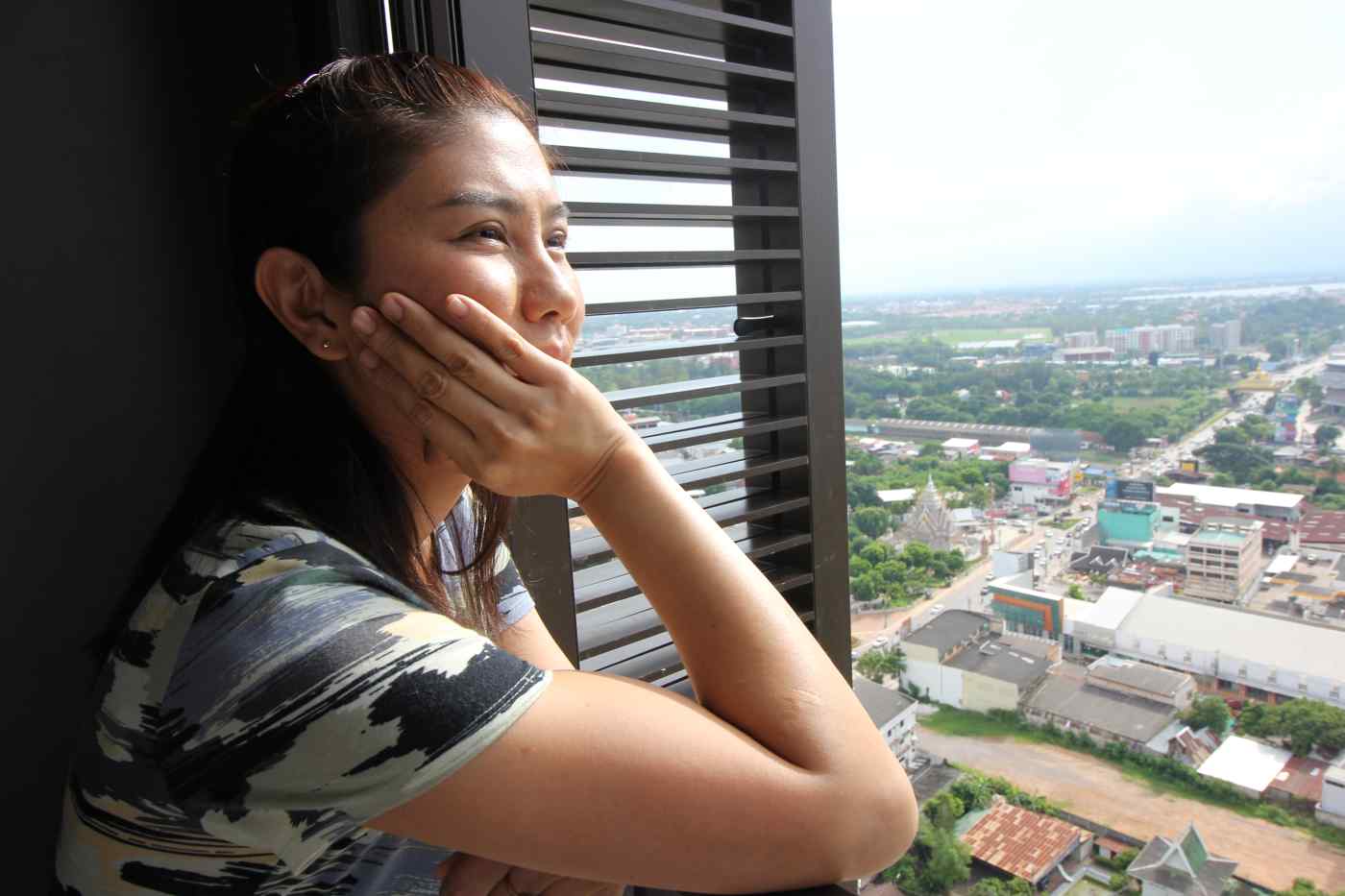 Khanoengnit Bootvong takes in the scene of downtown Khon Kaen below from the condominium she is moving into.
MARWAAN MACAN-MARKAR, Asia regional correspondentAugust 2, 2016 16:00 JST | ASEAN
CopyCopied

KHON KAEN, Thailand -- In the heart of northeastern Thailand's largest city, a 37-story luxury condominium rises as a beacon of "vertical living," as some locals describe it. All 414 units in this new condo, named "The Houze," have been snapped up by residents with deep pockets who want to live in the tallest building in this largely flat cityscape of low-rise shophouses, commercial establishments, government offices and detached houses.

Khanoengnit Bootvong was looking for a change of lifestyle when she bought her compact single-bedroom unit on the 24th floor of the condo, which smells of fresh paint and still has workmen scurrying around applying finishing touches. "It feels like going up a mountain and looking down," said the 39-year-old dentist as she slid open the wooden panels in her living room to take in a panoramic view of the sun-drenched city below.

Property developers are thriving on surging demand for real estate in Khon Kaen, which is now transforming the landscape of one of Thailand's major second-tier cities. The city now boasts four residential towers rising above 30 floors and a scattering of smaller condos that together have supplied 3,000-plus completed units since 2012. The top sellers are one-bedroom apartments ranging from 26-sq.-meters to 40-sq.-meters and priced at 1 million baht (about 28,800$) to 2.5 million baht. Suratvadee Salitdeechaigool, a Khon Kaen property developer, standing in front of "The Houze", the city's tallest condominium, built by her company.

Khon Kaen's property market is spreading horizontally, too, as gated luxury communities, with neat rows of two-story detached houses, extend their borders into the surrounding paddy fields. According to real estate agents, 1,000 new houses have been built annually over the last three years in this city of more than 113,000 residents. They sell from 2.5 million baht, for a 150-sq.-meter building, to 4 million baht for a 200-sq.-meter building.

"The market is growing and is stable; it is not a bubble," said Channarong Buristrakul, president of Khon Kaen's Real Estate Association. Nevertheless, property companies are flocking to the area, with investments flowing from major Bangkok-based developers such as Sansiri, Land & Houses and CP Land, the property arm of agribusiness giant Charoen Pokphand.

The uptick in the property sector has pushed up land prices in Khon Kaen threefold since 2011 -- even higher in the downtown area. A typical four-story commercial building valued at 2.4 million baht in 2013 will currently sell for 8.6 million baht, according to Rene Pitayataratorn, a local businessman. As a result, Khon Kaen now has the highest land prices of any provincial capital in the 20 northeastern provinces, which are home to a third of Thailand's population and are the rice bowl of the country.

The changes can be traced back to the aftermath of devastating floods that inundated large swathes of central Thailand in 2011, leaving 815 people dead, affecting 13.6 million others and causing $45.7 billion worth of economic damage, according to the World Bank. In the wake of the floods, Thais looked for secure cities in which to invest in homes, and Khon Kaen surfaced as a safe bet. "The property market had been growing before the floods, but it started to boom from 2012 onward," said Channarong.

One real estate agent said he was still receiving queries from Bangkok and other provinces in the south, ranging from investors sniffing for business opportunities to retirees and families looking for second homes. "They call looking for land, condos and houses," said Vongvaris Sirijirakoncharoen. "They feel safe [because] we don't have tsunamis, earthquakes and major floods."

The recent arrivals have added to growing local demand for a new style of living being shaped by bureaucrats working in the city, which is a regional hub for provincial administrations, and by medical staff attached to large hospitals in the area. Families enjoying financial windfalls from agribusinesses, car and motorcycle sales and local industry have eyed condos as sound investments. One rice miller from the nearby province of Chaiyaphum bought a unit while his daughter was studying at Khon Kaen University, according to a local real estate agent.

The city's location has been providential, too. New routes known as the East-West Economic Corridor and the North-South Economic Corridor -- transportation routes intended to boost the economies of mainland Southeast Asia -- both pass through Khon Kaen, helping the city to build on its record as a logistics and wholesale hub for Thai trade in the northeast. Large companies catering to Thai shoppers, such as 7-Eleven, an arm of Japan's Seven & I Holdings, and Tesco-Lotus, a unit of the U.K.'s Tesco retailing group, have bought parcels of land on the outskirts of the city for new distribution centers . Teerasak Teecayuphan, Khon Kaen's mayor, told the Nikkei Asian Review that the city was on the cusp of becoming a "major economic player" linking China and Myanmar in the north and northwest with Laos, Cambodia and Vietnam to the east and southeast. "The economic and investment opportunities are expanding," he added, pointing to a spike in passengers flying into the city to amplify the point. Plans are afoot to expand the city's airport, which now handles close to 1.2 million passengers a year, compared with 500,000 five years ago.

Real estate agents are surprised at the speed of change in this once quiet city, which for many years had large swathes of semi-forest within the municipal limits. Some stretches, along the borders of a lake, now have handsome homes built for the upper-middle classes. Peak-hour traffic jams have become a common sight.

Adirek Hongpoonpiat, owner of a pool business, is enjoying a windfall from the spread of modern tastes, having sold 20 swimming and plunge pools to local homeowners in the first half of 2016, equaling his total annual sales in 2015. "It is like a new fashion that is catching on. My customers want to feel international," he said.

These residents are charting a new identity for a city that was once regarded as a gateway into rural Thailand and its rice-growing heartland. Encouraged by this shift, the mayor has set his sights on adding another feature to his rapidly modernizing city -- a light rail transit system. It is necessary, he noted, because it is all part of making Khon Kaen a "smart city."