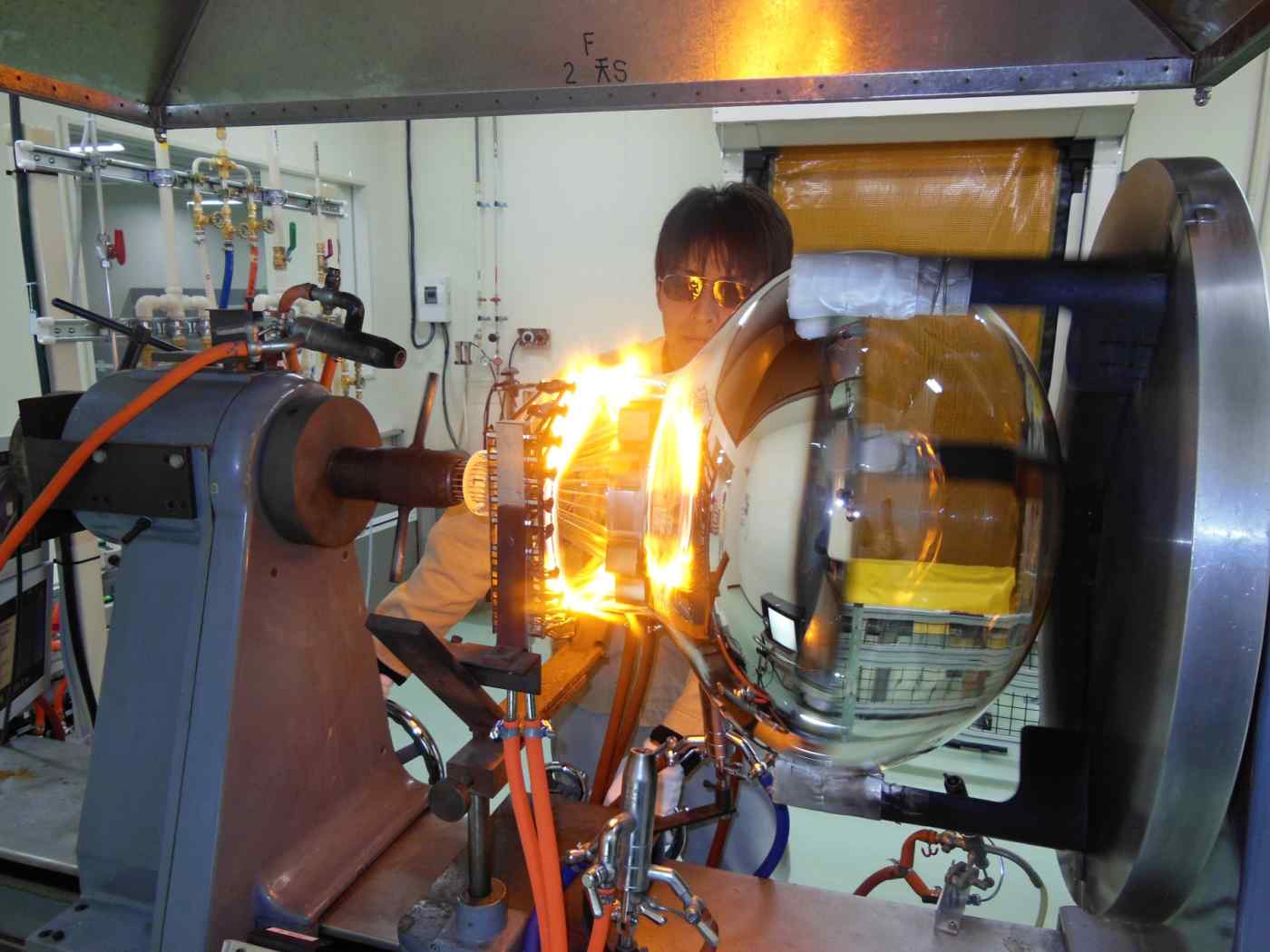 TOKYO   Investing in R&D has brought Japan's Hamamatsu Photonics both prestige and profit. In 2015, for the third time, the company's technology helped scientists win a Nobel Prize in physics. The manufacturer's operating profit on sales, meanwhile, is a hefty 20%.

At its Toyooka factory in Shizuoka Prefecture, southwest of Tokyo, Hamamatsu Photonics produces photomultiplier tubes, or PMTs, a device that can detect weak light emissions, convert them to electrons and amplify them for observation. The company controls 90% of the global PMT market.

The factory is the company's main PMT production base. In a new building completed there last May for some 6.5 billion yen ($59.8 million), engineers are busy churning out 20-inch PMTs, the largest such devices in the world. Many of these PMTs will be shipped to emerging countries, where rapid advances in science and technology are fueling demand for the tools needed to carry out cutting-edge experiments. Previously, such equipment was sold almost exclusively to buyers in developed countries.

The company is also preparing to ship 10,000 units to Russia for an experiment at Lake Baikal. "Orders from researchers around the world engaged in advanced studies come to between 30 billion and 40 billion yen," said Junichi Takeuchi, the senior managing director who oversees the operation.

The company supplied 13,000 20-inch PMTs to the Super-Kamiokande particle observation facility in Gifu Prefecture, central Japan. This technology provided the basis for the 2015 Nobel Prize-winning study by Takaaki Kajita, director of the Institute for Cosmic Ray Research at the University of Tokyo. With the facility's previous incarnation, the Kamiokande, Masatoshi Koshiba won a Nobel Prize in 2002. Kajita was the first to show that neutrinos have mass, and back in 1987, Koshiba detected neutrinos from a supernova explosion outside the Milky Way.

The company's other products, such as SSD, or Silicon Strip Detector, are used in the gigantic particle accelerator at the CERN research facility in Europe, which discovered the Higgs boson, leading to the 2013 Nobel Physics prize for Peter Higgs and Francois Englert.

SINGLE-MINDED FOCUS   New uses are being found for photoelectric conversion technology. With the help of the Japanese government, Hamamatsu Photonics is developing a special image pickup tube for cameras to inspect the inside of nuclear reactors at the crippled Fukushima Dai-ichi plant, operated by Tokyo Electric Power Co. Hamamatsu Photonics is using technology from its PMTs to develop tubes that can withstand high levels of radiation, as the cameras will be used to check nuclear debris remaining inside the reactors, which were severely damaged by explosions caused by the 2011 earthquake and tsunami. The company hopes to complete development of the tubes by next March. Hamamatsu Photonics is also speeding up efforts to develop micro-PMTs that will be about one-seventh the volume of today's smallest devices. The micro-PMT, the company hopes, will be used for medical examinations that will require just a few drops of blood. Prototypes are now being evaluated by clients. PMTs are used for PETs.

There are two reasons for his confidence. One is the high quality of the company's products, underpinned by its engineers' creativity. The other is its advantage in a niche market. Hamamatsu Photonics has concentrated its resources in areas it does best and stayed away from mass-production markets. It avoids price competition as much as possible to maintain high profit margins, and spends about 10% of its group sales on research and development.

This in turn has made it possible for the company to develop new technologies and products that rivals cannot follow. For instance, almost all Positron Emission Tomography (PET) systems, used to diagnose cancer and other diseases, are equipped with Hamamatsu Photonics' PMTs.

The company has started construction of a new building at its Shingai Factory in Hamamatsu to increase manufacturing capacity for opto-semiconductor components, with total investment of 2.8 billion yen. Scheduled to be completed in February 2017, the new building will be used for post-processing steps.

Opto-semiconductors play the role of an "eye" for various sensors. Hamamatsu Photonics' products have a 50% share of the global market for X-ray computed tomography (CT) equipment, and around 20% for controlling machine tools.