KUALA LUMPUR -- Japanese e-commerce company Rakuten made its first foray into online stock trading in Malaysia on Thursday, hoping to capture 30% of the market share in three years. 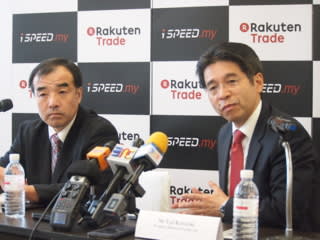 Online stock trading accounts for about a quarter of Malaysia's share transactions, with the majority of investors preferring to seek the advice of brokers or brokers' agents before trading.

Rakuten Trade said it is offering internet-savvy investors trading in real-time through smartphones and tablets at one of the lowest brokerage rates, plus access to research reports and news.

By charging a flat rate of 8 ringgit ($1.80) for transactions below 10,000 ringgit, the app may attract first-time investors trading in penny stocks, as well in the shares of companies with small and medium-size market capitalizations. The flat-rate fee is about one-fifth that charged by brokers' agents.

Malaysia, said Yuji Kusunoki of Rakuten Securities, is the best choice for the business due to its high smartphone penetration rate and relatively large equities market.

Kenanga is a good partner for Rakuten. It is the largest independent brokerage by equity trading volume and value. Besides stockbroking, Kenanga has done business in corporate banking and wealth management for more than 40 years.

Rakuten Trade's market entry comes as Malaysia promotes financial technology aimed at young investors. The venture was issued the first restricted dealing license, which was introduced in 2015 to encourage innovation. The new type of license has allowed Kenanga to focus on its equity brokerage business targeting corporate customers and savvy retail clients.

Rakuten Trade aims to be profitable within three years by capturing 30% of the retail market, said Kaoru Arai, the company's managing director.

Rakuten initially entered Malaysia in 2012 with an e-commerce marketplace, but pulled out after nearly four years, as it did in Singapore and Indonesia, under a corporate restructuring.