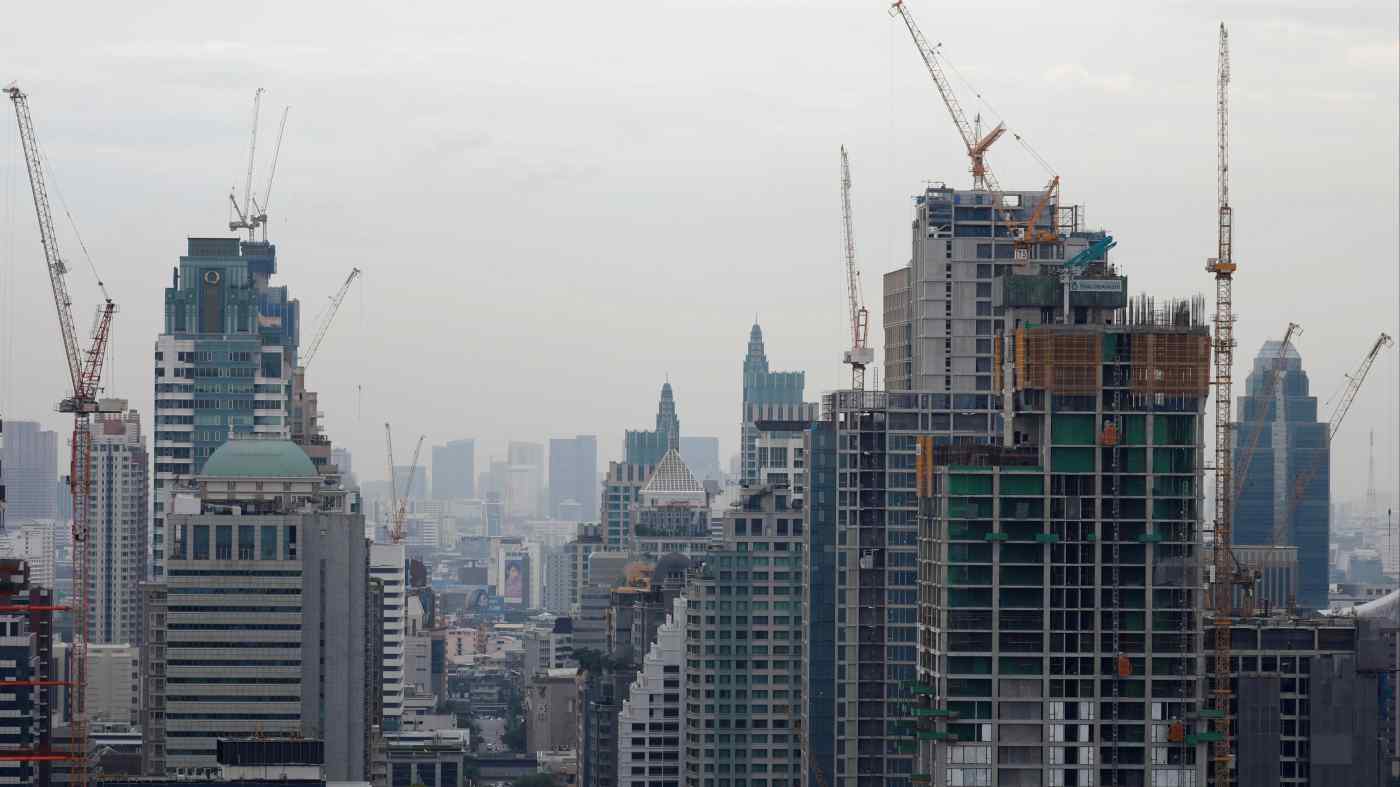 BANGKOK -- Thai residential property developers are being forced to rethink their project strategies as waning Chinese investment hurts market sentiment, with the sector having shrunk by 13% year-on-year in the first half of 2019.

"We are an aggressive company, but we need to be more careful," said Thitima Rungkwansiriroj, chief financial officer of Singha Estate. The developer, which is listed on the Stock Exchange of Thailand, has recently postponed a new condominium project located in a prime area of Bangkok. It was originally scheduled to launch in October, but the company is delaying it until February 2020.

Thitima admitted that the postponement was due to sluggish market demand. "The sales rate of a new project should exceed 30% soon after the presale kickoff and should keep rising. If not, we should delay the launch," she said.

According to Risinee Sarikaputra, director of research at London-headquartered real estate company Knight Frank, the sales rate for newly launched condos in the quarter ended June dropped to an all-time low of 15.7%. As of the end of June, the number of unsold condo units in Bangkok rose to 92,815 from 89,765 at the end of 2018.

Singapore's real estate market is far ahead of other Southeast Asian nations in terms of size, according to index provider MSCI. Thailand is the third largest in the region but is rapidly catching up to Malaysia, which holds second place. The kingdom was enjoying a boom until last year, with Chinese investors finding opportunities in the market as Bangkok emerged as a popular destination for Chinese tourists.

The Thai residential market has become heavily dependent on the sentiment of Chinese investors. Of the 92.16 billion baht ($3 billion) transferred from abroad by all foreigners to purchase condominium units in Thailand in 2018, 43% came from China and Hong Kong, according to the Bank of Thailand, the country's central bank.

But Chinese money is now ebbing away from Southeast Asia's second largest economy, as Thai properties have become relatively expensive due to a weakening Chinese yuan and strengthening Thai baht. Central bank data shows that a monthly average of about 2 billion baht was transferred from China and Hong Kong in the first half of this year, a significant drop from more than 3 billion baht in the same period in 2018. The yuan has depreciated due to China's economic slowdown and the U.S.-China trade war. Meanwhile, the Thai currency has appreciated because of the country's strong fundamentals, including its large current account surplus. Since the Sino-U.S. trade war broke out at the end of March 2018, the yuan has fallen by the largest margin against the baht among major Asian currencies at 13.9%.

Singha Estate joins a line of developers that have been struck by the slowing residential market. One large developer, Noble Development, in May presented a "special" starting price of 4.7 million baht ($150,000) for units of a condominium project in central Bangkok.

The price was 19% lower than its initial starting price of 5.8 million baht in June 2018, when Noble said the project achieved 80% of its presales booking in just two hours. The discount is seen as a move to generate cash flow in a sluggish market in order to be able to move on to another project.

Ananda Development, one of Thailand's 10 largest property developers, introduced a project in May but quickly backtracked. The company decided to modify the project further to fit current demand and reintroduced it in early August. For Chinese who already own Thai property assets, the strong baht gives them an opportunity to cash in by getting rid of their baht asset holdings and converting the cash to yuan.

"Investors' money is heading for places like London, where property assets look cheaper due to the weak British pound," said Phanom Kanjanathiemthao, managing director at Knight Frank. The pound is falling as the U.K. looks closer to a no-deal Brexit.

In the meantime, Thai domestic demand for residential properties is not strong enough to make such Chinese owners stay.

The country's high levels of household debt have led the Bank of Thailand to implement the macroprudential measure of restricting mortgage loans. The kingdom's household debt covered 78.2% of its gross domestic product in 2018. Since 2013, the figure has been hovering above 70%. In the 2000s, it was below 60%.

The rule restricts loans to 90% for the first home, 80% for the second home and 70% for the third home. Since its implementation on April 1, rejections of mortgage loans by commercial banks have risen by 50%, according to property developers.

"Frankly, I want the Bank of Thailand to recall the measure," Thai Real Estate Association President Pornnarit Chuanchaisit said, speaking on behalf of the sector. However, some kind of mortgage restriction is necessary, as there have been cases of people with clear credit records applying for loans to buy several condominiums, playing a risky game in a falling market, according to regulators. Subdued foreign and domestic demand shrunk the Greater Bangkok housing market by 13% in the first half of this year compared to the same period last year, according to the country's largest residential property developer Pruksa Holdings. Only two out of 12 major developers were able to clinch presales of more than 50% of their yearly targets in the first half of the year. Knight Frank reported that the average price of Bangkok condos per sq. meter fell by 6% year-on-year in 2018.

According to an estimate by local consultancy Agency for Real Estate Affairs, developers are expected to launch 98,251 residential units in 2019, down 21% from the previous year and the lowest number since 2011.

"Real demand for Thais to buy residential properties for themselves or for rent remains strong, as does demand for offices or warehouses. Only investment demand is weak," said Knight Frank's Phanom. "Developers must thoroughly review their ongoing projects and make necessary changes to their strategies in order to meet demand."