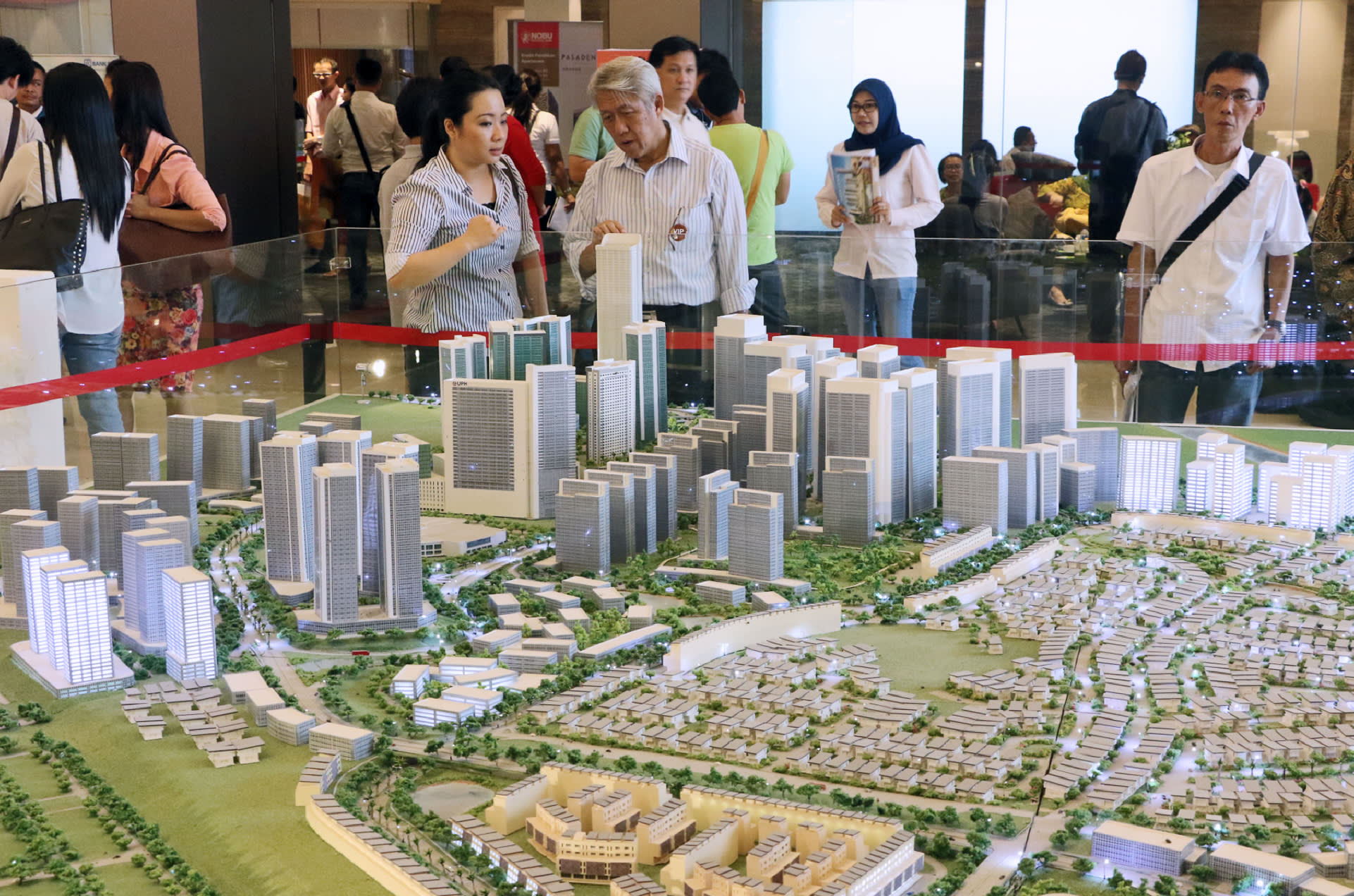 Lippo Karawaci, a property developer in Indonesia is constructing a big town with population of 70 thousand people in Cikarang,on the outskirts of eastern Jakarta. (Photo by Keiichiro Asahara)

BANGKOK -- About a third of the 30 best-performing non-bank ASEAN 100 companies in 2014 were in the real estate development and construction sectors, having benefited from strong demand for housing and offices as well as stepped-up construction of commercial facilities amid the region's increasing urbanization. Companies that are tapping overseas markets also made a strong showing.

Lippo Karawaci, the core subsidiary of Chinese-Indonesian conglomerate Lippo Group, saw its net profit for the year double from the previous year. Revenue jumped 75%, mainly due to the asset sale of a shopping mall to its Singapore-listed real estate investment trust, Lippo Malls Indonesia Retail Trust. The REIT itself, however, posted lower gross rental income due to the decline of the Indonesian rupiah against the Singapore dollar. Revenue at Lippo Karawaci's healthcare division, which runs the country's largest private hospital chain, increased 33%. The company opened four hospitals during the year, bringing its total number of hospitals under operation to 20. The Siloam hospital chain caters to the upper income segment by boasting high-end medical equipment and luxurious facilities. Jakarta Globe, a local English newspaper affiliated with the Lippo Group, recently reported that the company plans to open a dozen hospitals in Myanmar.

CapitaLand, Southeast Asia's largest property developer based in Singapore, is holding onto growth despite the slowdown in the residential market in Singapore and mainland China, its two core markets, thanks to resilient shopping mall business in the region. CapitaMalls Asia, the subsidiary that owns shopping malls in Asia, saw 84% and 12% year-on-year growth in revenue and earnings before interest and taxes, or EBIT, respectively. The boost came from the new malls opened in Singapore's densely populated suburbs, as well as the improved performance in malls in China.

The company still has its sights firmly set on China and plans to seek opportunities to acquire new sites to boost its development pipeline in the world's second-biggest economy. "Singapore and China remain as the group's core markets, and we will pursue growth opportunities in Vietnam, Indonesia and Malaysia," President and CEO Lim Ming Yan said.

Ayala Land, the real estate unit of Ayala Corp., a major conglomerate in the Philippines, also saw a steady increase in net profit last year. This was attributable to a slew of projects launched to meet strong demand from the market.

Sustained growth of remittances from Filipino expats and the flourishing business process outsourcing industry have been instrumental in boosting residential take-ups and driving demand for retail space. Despite concerns of slowing growth in some segments of the residential sector, Ayala Land aims to grow 20% annually from 2014 to 2020.

Better contribution from energy and construction segments propelled the earnings growth of Malaysian construction company MMC. Its net profit was 2.2 times higher than in the previous year.

The energy segment, represented by subsidiaries Malakoff and Gas Malaysia, was the biggest contributor to revenue, generating almost two-thirds of the group's income. Malakoff is the largest independent power producer in Malaysia, with operations in the Middle East and Australia. Work is also progressing on Malaysia's inaugural Mass Rapid Transit subway line, which is being jointly built by MMC. The 51km line connecting suburbs with the capital is expected to be completed by July 2017.

Indonesian investment company Saratoga Investama Sedaya registered the highest net profit growth among ASEAN 100 companies. It more than tripled its net profit thanks to the strong performances of its mainstay infrastructure and natural resources businesses.

Bloomberry Resorts, a Philippine casino operator, moved into the black. The company is one of the four casino licensees at the Bagong Nayong Pilipino Entertainment City, a new gaming hub near Manila Bay. The company recorded 4.072 billion pesos ($91.7 million) in profit last year, a big turnaround from the 1.315 billion peso loss the year before. Gross gaming revenues and nongaming revenues hit record levels at 30.387 billion pesos and 1.071 billion pesos, respectively.

True Corp., telecommunication arm of Thai conglomerate Charoen Pokphand Group, also came back into the black in 2014, ending three straight years of losses. A huge recapitalization in September, which included an 18% stake sale to China Mobile, the world's largest mobile carrier by subscribers, helped the company pay back debts, resulting in a significant decrease in interest payments.

"2014 marked a turnaround year for True Group," the company said in a statement. Thanks to stronger financials, the company is earmarking 32 billion baht ($954 million) for capital expenditure in 2015, up 16% from last year. Of that, 18 billion baht will be allocated to True Mobile, the third-largest mobile carrier in Thailand. With a spectrum auction scheduled later this year, True hopes to extend its lead among the nation's three carriers by offering fourth-generation network services.

Other Thai companies also turned in solid performances, a remarkable feat given that Thailand's real gross domestic product growth, at 0.7%, was the lowest among Southeast Asian countries. These companies include food producers that expanded into overseas markets to offset weak business conditions at home.

Thai Union Frozen Products, the world's largest canned tuna processor, posted strong profit growth thanks to recovering profitability in its core tuna business plus a slew of mergers and acquisitions. In 2014, it added two seafood companies to its portfolio, namely France's MerAlliance and Norway's King Oscar. Both transactions were completed in November, helping the Thai company post its best-ever quarterly sales in the three months through December. In addition, the company announced it will acquire Bumble Bee Seafoods, the top seller of canned seafood in North America by market share, for $1.5 billion.

Charoen Pokphand Foods, the core agribusiness arm of CP Group, saw its net profits surge 49% on the year in 2014. Revenue from sales grew 9% thanks to higher meat prices and an expansion in international operations, which account for 59% of total sales. The company currently has operations in 17 regions and countries. Revenue from these overseas operations is targeted to grow 15% per year for the next five years.

Some service companies are tapping overseas demand. Bangkok Dusit Medical Services, Thailand's largest hospital operator, which is seeking to build the largest hospital network in Southeast Asia, saw profit rise 18%. It has set up operations in Cambodia and is looking to enter other neighboring countries to raise the number of its hospitals to 50.