Recharging Tepco is an uphill battle for ex-Hitachi head TOKYO -- It has been six months since Tokyo Electric Power Co. Holdings tapped Takashi Kawamura, one of Japan's most respected business executives, to take over as chairman. Kawamura's resume is stellar, highlighted by the gargantuan feat of turning around floundering electronics conglomerate Hitachi in barely 100 days.

But whatever his past reputation, Kawamura's tenure at Tepco has been rocky, with his reforms failing to gain much traction.

The chairman has had his hands full at the ailing utility, the fortunes of which are tied to the ongoing cleanup at Fukushima Daiichii nuclear plant. The effort is draining huge amounts of money, forcing Tepco to find ways to further cut costs.

"What will happen if we cancel purchases from Tokai No. 2 power station?"

This is the scenario quietly being discussed at the nine-member "Future Management Committee," which acts as the de facto decision-making body of the power company. Tokai No.2 is Japan Atomic Power's reactor in Ibaraki Prefecture, northeast of Tokyo.

It is a thorny issue involving multiple stakeholders and far-reaching implications.

The official board has little time for getting through its laundry-list of items, so it remains with the committee to sort out other issues before taking them to the board for approval, Kawamura says. Since August, the nine committee members -- Kawamura, President Tomoaki Kobayakawa, heads of Tepco's three subsidiaries as well as former officials of the Ministry of Economy, Trade and Industry -- meet regularly to work out policy before presenting their decisions to the board of directors for approval.

In from the cold

Before Kawamura took over as Hitachi's chairman, he had seemingly reached the apogee of his career, having already been transferred to a subsidiary. But after the company posted a disastrous net loss of 787.3 billion yen ($6.92 billion at current exchange rates) for the fiscal year ended March 2009, then-Chairman Etsuhiko Shoyama decided he had nobody to turn to but the 69-year-old Kawamura. Tepco gets first OK to restart reactors since Fukushima

Kawamura put together a six-member team largely comprised of executives outside the core Hitachi leadership. One of these was later-Hitachi Chairman Hiroaki Nakanishi, who had been exiled to a troubled U.S. subsidiary and whose days with Hitachi were mostly over.

The team did remarkably well in a short period of time. Within 100 days of Kawamura assuming his post, they had delisted all five listed subsidiaries, including Hitachi Information Systems and Hitachi Maxell, so they could merge with the parent. The team also pushed to integrate three wayward subsidiaries -- Hitachi Metals, Hitachi Cable and Hitachi Chemical.

Tepco's Future Committee seems inspired by Kawamura's experience at Hitachi, and the chairman has demonstrated he can handle affiliated companies well. However, the situation with Japan Atomic, in which Tepco holds a 28.2% stake, is more complex than anything Kawamura faced at Hitachi.

The need to save

Money saved by cutting ties with Japan Atomic could be used to help pay for the Fukushima Daiichi cleanup, which cost Tepco about 300 billion yen last fiscal year and will become even more expensive. According to the utility's projections, cleanup costs will hit 500 billion yen annually over the next decade, making it imperative that Tepco generate a pretax profit of over 300 billion yen -- 70 billion yen more than fiscal 2016.

Tepco could likely improve profit by around 50 billion yen to 110 billion yen annually by restarting reactors No. 6 and No. 7 at its Kashiwazaki-Kariwa nuclear power plant in Niigata Prefecture. This would eliminate the need to import fossil fuels, which are currently used to make up for the lack of its nuclear-generated power. But it remains unclear if local consent can be obtained. Because its hands are tied, Tepco must reduce costs in whatever way possible.

Tepco and Japan Atomic have haggled over prices since summer, and Tepco is the power company's largest stockholder. The two are close, too, as President Mamoru Muramatsu, who was once considered a candidate for Tepco's top spot, joined Japan Atomic three years ago.

About 80% of power generated at Tokai No. 2 has been purchased by Tepco, with the remaining earmarked for Tohoku Electric Power. Terminating its contract would obviously save money, but at the expense of Japan Atomic, which only has two reactors and might not survive the loss of a big customer.

Moreover, if Tepco did end its contract and Japan Atomic went under, who would pay the huge decommissioning costs at the power plant, in which Tepco has a substantial stake?

When asked at a press conference in November, Economy, Trade and Industry Minister Hiroshige Seko said "I believe that (Japan's) electric power companies will cooperate with the decommissioning."

Furthermore, some observers are skeptical that the Tokai No.2 power station is ever coming back online. Ibaraki's former governor, Masaru Hashimoto, who stepped down in late September, told a local newspaper in August that he opposes restarting the reactors because the area would be very difficult to evacuate in the event of an accident.

Some are puzzled by Hashimoto's flip-flopping, as he had once supported nuclear power while in the governor's chair. But many locals agree with his logic: Tokai No. 2 is located in one of Japan's most populous regions, with some 960,000 residents living within 30km of the station.

Moreover, Japan Atomic is going to need money in the future, as it wants to extend the operating life of Tokai No. 2. But even if the company gets approval, the reactor will require about 180 billion yen in safety upgrades to see it through another 20 years.

The expensive bill is a consequence of the Fukushima nuclear disaster, after which standards for safety became even steeper.

"Japan Atomic Power is being forced to make a massive investment in Tokai No. 2 power station because of Fukushima," a Tepco executive said. "Morally speaking, we cannot put Japan Atomic out of business for the sake of saving Tepco."

Because Japan Atomic cannot raise the funds on its own, it has reached out to Tepco for support.

"I've said from the start I wouldn't be able to implement a 100-day plan at Tepco," Kawamura told reporters at his head office on Dec. 1. "I would have been in big trouble if I had tried to."

Kawamura explained that while it is easy to identify areas for reform, "actually implementing the reforms is hard due to the number of stakeholders, such as employees, clients and financial institutions, as well as national, prefectural and municipal governments."

In July, Kawamura caused a furor when media reported him saying that the company had "already decided" to release radioactive water from the crippled Fukushima power plant into the ocean. Under current regulations, radioactive water that has been properly diluted can be released. The holding tanks at the Fukushima facility are brimming with diluted water that must eventually be released, but the announcement still caused a stir.

Especially outraged were fisheries and other organizations in the area, which are concerned about the reputation of their products. When Kawamura and other Tepco officials were pressed on the matter, they said that the chairman's words were taken out of context.

Shortly after the incident, Kawamura paid a visit to the newly elected Niigata Gov. Ryuichi Yoneyama. This time, he read out from carefully prepared remarks -- an unusual display by the chairman, who usually speaks to the media unscripted. 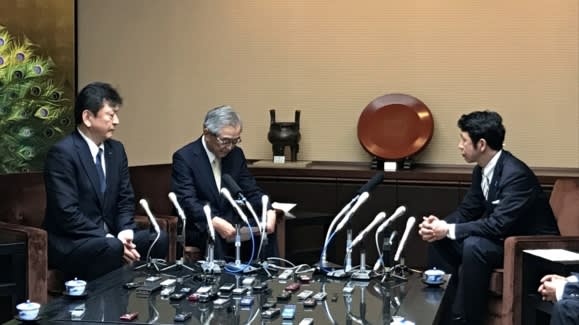 "The backlash from his careless remarks seem to have hit him hard," said a Tepco representative.

Kawamura is fond of a quote from the Chinese philosopher Zhuangzi: "The friendship between men of virtue is light like water, yet affectionate."

The chairman takes this to heart. He is known for his brisk attitude, wrapping up meetings in exactly one hour, and is not particularly fond of schmoozing with associates. Nor is he inclined to cling to his post. He served as Hitachi's president and chairman for just five years to oversee restructuring. Kawamura also seems unimpressed with power, having turned down an offer to become chairman of the Japan Business Federation, or Keidanren, the country's most prestigious economic organization.

Why, then, did Kawamura decide to take over as Tepco's chairman?

One former Hitachi colleague said Kawamura assumed the post because he felt guilty about having turned down the offer from Keidanren. Furthermore, he could not ignore the power industry's current predicament, given his former role at Hitachi, a huge consumer of electricity.

Just as Kawamura's team of outsiders led Hitachi from the brink, Tepco's turnaround is being steered by outsiders: namely Keita Nishiyama and Ryuichi Yamashita, both former officials at the industry ministry. Immediately after the March 2011 earthquake and tsunami, the two played key roles in the government for creating a framework for Tepco's reconstruction.

The significance of the two former ministry officials cannot be understated. Tomoaki Kobayakawa, Tepco's young president, finds himself flanked at his desk by Nishiyama, a mere director. The symbolism is telling, as the seat that Nishiyama occupies used to be the vice president's.

Observers note that Nishiyama and Yamashita respect Kawamura, who became Tepco's chairman at the request of the industry ministry. However, one executive at a rival utility said Kawamura and Kobayakawa are "just figureheads," and it is the two former government officials who are actually calling the shots.

"I think the government is trying to increase its influence over Tepco," a Tepco executive said. 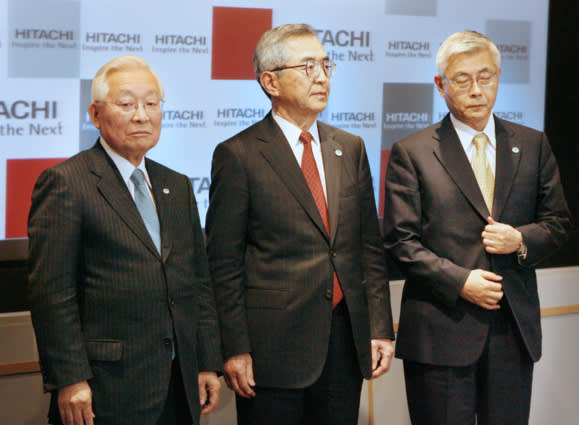 The 69-year-old Takashi Kawamura, center, was chosen as president of ailing Japanese electronics conglomerate Hitachi. Here he is shown with then-Chairman Etsuhiko Shoyama, left, and President Kazuo Furukawa on March 16, 2009.

That said, Kawamura has only been at the helm for about six months. The situation is similar to that of October 2009, when Hitachi was mulling public stock offerings to improve its finances. People also questioned the ability of the then-69-year-old.

Tepco's reforms are aimed at coping with the cost of the Fukushima Daiichi nuclear disaster, which is estimated at 16 trillion yen for Tepco alone. The success or failure of the reforms will affect the entire country. Markets are focused on whether Kawamura's efforts will bear fruit while keeping its numerous stakeholders content.