Reciprocal healthcare for Thais and Japanese 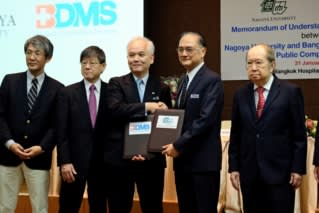 The two organizations will collaborate on educational programs and exchange nurses and physicians.

"We want to be the best occupational health provider in Asia-Pacific in the next few years, especially in ASEAN," Executive Vice President Chatree Duangnet said after a signing ceremony on Saturday.

Bangkok Dusit also hopes to build on Nagoya University's expertise in geriatric care. Like elsewhere, Thailand's population is aging and people over 60 now account for 13% of the total population. In the next 20 years, this is expected to rise to 25%.

"We are in the aging society but we are really behind," Chatreee said, noting that Japan is much further down the path caring for the elderly.

The arrangement with Dusit Medical is Nagoya University's first partnership with a foreign hospital group, and is intended to develop into a comprehensive referral network for Japanese traveling and working abroad.

"We want to be able to provide healthcare and a sense of security to our patients, as well as our students [who] are increasingly going outside Japan," said Michinari Hamaguchi, Nagoya University's president. He noted that despite the large Japanese population residing in Thailand, a cross-border health care management system has not yet been established.